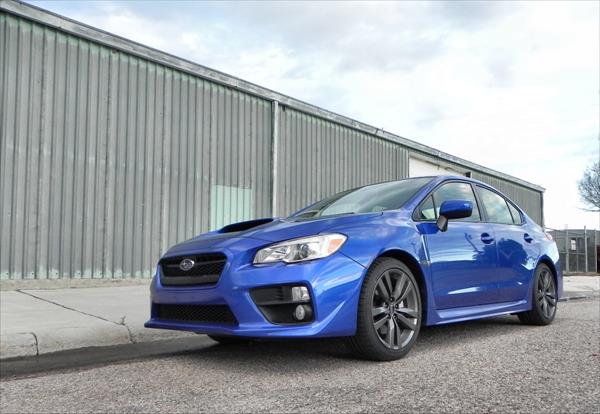 Overview (Final Score: A-)
When the Subaru WRX (World Rallycross) was introduced about a decade ago, it was an almost instant success. It combined the everyday practicality of a compact family car (the Impreza) with a performance-focus built for rally. The combination of daily use ergonomics and Subaru's legendary all-wheel drive performance was immediately appealing.

A new generation of the WRX was introduced last year and has been refined for the 2016 model year. The new 2016 Subaru WRX retains the stiff chassis and suspension of the previous generation, but adds a little more bang for the buck with a modern infotainment upgrade.

The 2016 WRX is a powerfully fun little car that seats up to five, has enough trunk space for groceries (or a couple of full-sized spares, depending on your plans), and is equally at home jetting up the street for that forgotten salad dressing or flying over the dirt to drift corners and bounce across a finish line.

When the new-generation WRX appeared, many enthusiasts were disappointed at the loss of the hatchback option. This is understandable, but the new sedan styling and dropping of the Impreza name shows a more focused performance-built WRX that every fan will fully appreciate.

Without a doubt, the 2016 Subaru WRX is one of the best sports car options on the market today and is without rival in its rally-driving credibility and factory-ready race build.


What We Loved About the 2016 Subaru WRX 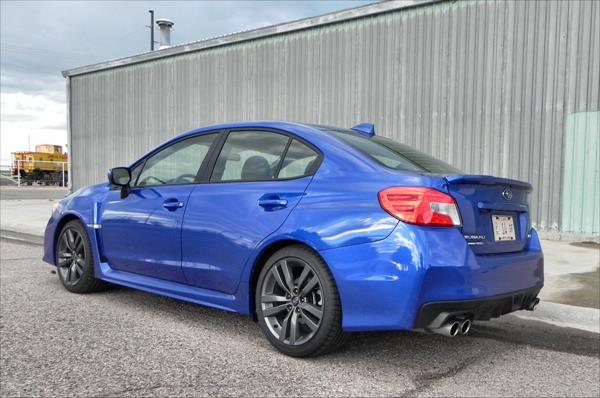 Exterior View (8/10 relative to market)
The 2016 WRX begins as a Subaru Impreza sedan. Then Subaru gets busy with the styling cues and sport themes. This begins at the front where the fascia sees the addition of dual foglamp bezels and a huge hood scoop rising up above the grille.

Along the sides of the Subaru WRX, we see a huge brake vent behind the front wheel wells, and a much more exciting array of alloy wheel options than can be found on the more sedate Impreza. At the rear, a larger integrated deck spoiler, more pronounced bumper fins, and dual exhaust tips finish off the WRX's divergence from the Impreza.

The style that the 2016 Subaru WRX holds is not standout in the sports car crowd, but is uniquely Subaru with a more sedate, business like approach to what the WRX is named for: rally. 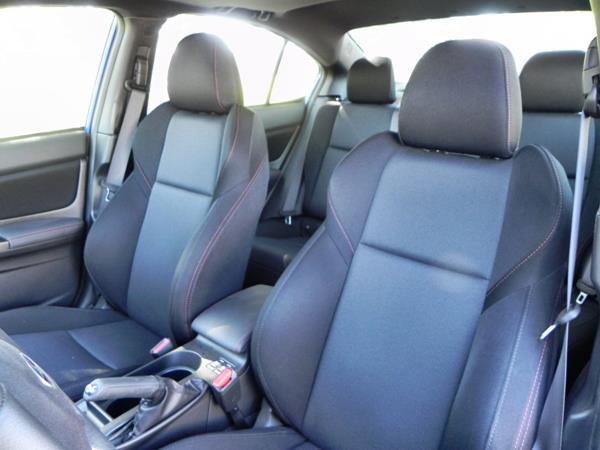 Interior Comfort, Quality, Ergonomics (7/10)
The WRX's three trim levels primarily change the interior's refinement. The base model has a good amount of standard equipment, but is generally basic in terms of design and comfort - as befits most Subaru models. The greatest improvement here is the now-standard 6.2-inch touchscreen interface for infotainment.

Seating is also excellent in the base level WRX with the driver's position being perfectly suited for the car. Excellent visibility is a shining point for the WRX. At the base level, bolstering is very good for both driver and front passenger, which suits the WRX well.

The rear seat is as spacious as the compact build of the Subaru WRX will allow. Adults will find good headroom and shoulder room, but legroom is at a premium for taller folks. Trunk space is adequate, but not stellar, at 12 cubic feet. The rear seats are split-fold to give more room when required.

The best value for the buyer is likely going to be the Premium trim level. This adds heating to the front seats and a sunroof. The larger 7-inch infotainment screen, navigation, and premium audio can be added as options in the Premium package when the manual transmission is opted for. Those who want leather and access to advanced safety tech will have to go with the Limited package. We note that the top-tier, sport-oriented STI model is almost identical to the Premium model in its accouterments. 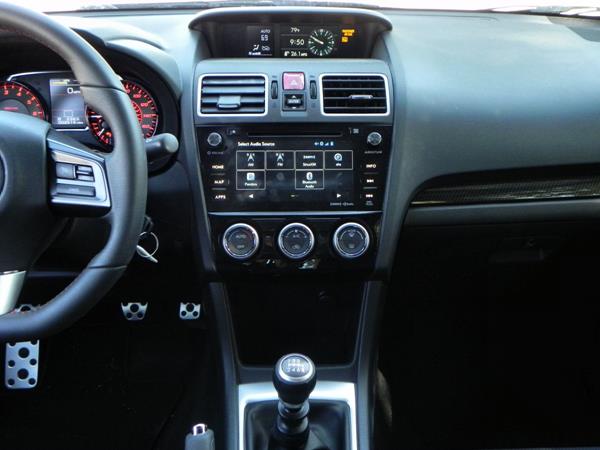 Technology (8/10)
The technology within the WRX is centered on the standard touchscreen interface and Subaru's Starlink user interface. The base system includes six-speaker audio, Bluetooth connectivity, a USB and auxiliary input, satellite and HD radio, and basic app functions to go along with these items.

Upgrading to the 7-inch Starlink screen brings navigation and a premium nine-speaker Harman Kardon stereo ($2,100 upgrade). This also adds a few more apps to the streaming options from the user's smart phone.


Fuel Economy (9/10)
Fuel economy in the 2016 Subaru WRX is good for the class, considering the all-wheel drive powertrain and sport-centric build. The EPA rates the manual transmission option at 24 mpg combined, with 21 mpg in the city and 28 mpg on the highway. With the continuously variable automatic transmission, fuel economy drops to 21 mpg combined (19 city, 25 highway).

Our time in the manual transmission WRX didn't prove out expectations on the long run, but when tested specifically for MPG, we did nearly match the expected EPA numbers. The difficulty here is in driving the WRX in a sedate, fuel-conscious manner. The car just does not lend itself to that, it begs the driver to press the throttle and ramp up the RPM for spirited fun. 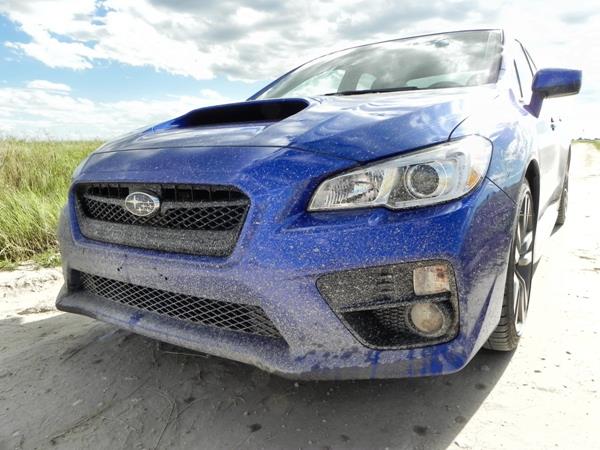 Predicted Reliability, Initial Quality Ratings (8/10)
Reliability scores for the 2016 model year are not yet available, but with the WRX largely the same this year as it was last, we can use 2015 expectations as a guide. The J.D. Power and Associates Vehicle Dependability Study rated the 2015 WRX as About Average in their assessment for reliability. There were no recalls for that model year.

Given these points and the high resale and expectation of the Subaru models on the whole, we feel that the 2016 WRX will hold good reliability and quality and that is reflected in our scoring here.


Safety (10/10)
Crash testing for the 2016 Subaru WRX has not been published, but this year is virtually identical to the 2015 model, which received top scores. The 2015 WRX was a Top Safety Pick by the Insurance Institute for Highway Safety and the National Highway Traffic Safety Administration gave similar results.

Standard safety features on the 2016 WRX include everything expected of a car on today's market: traction and stability control, a full suite of airbags, etc. A driver knee airbag is also included, as is a rearview camera.

Advanced safety options and active safety technologies are available in the Limited model. Blind spot detection, rear cross-traffic alerts, and lane departure warning are standard in this upper trim. Only vehicles equipped with the continuously variable transmission in the Limited trim, however, can get the EyeSight system with its adaptive cruise control, pre-collision braking, and lane keeping assistance. The latest-generation EyeSight is one of the best on the market and that it's offered at all in an affordable sports car like this is unusual. 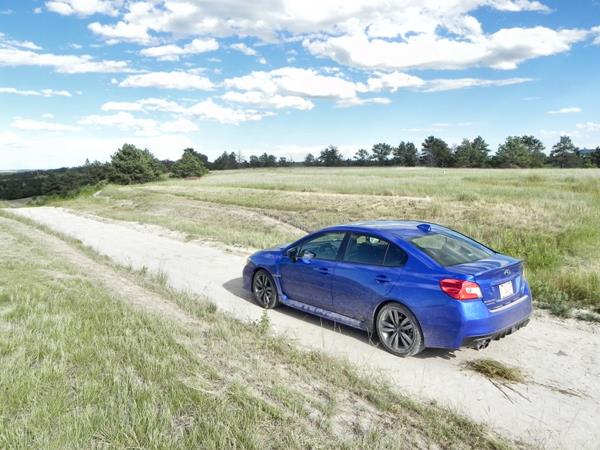 Performance (10/10)
The 2016 WRX is a performance car at its core. This begins with a turbocharged 2.0-liter horizontally-opposed (boxer-style) four-cylinder engine. That engine produces 268 horsepower and 258 pound-feet of torque. A six-speed manual transmission is standard, as is all-wheel drive (AWD). A continuously variable transmission (CVT) is optional on most trim levels of the WRX. The CVT includes steering-mounted paddle shifters to simulate a geared automatic.

In the manual version of the 2016 WRX, we averaged 5.5-second 0-60 mph sprints. Much of the fast pace in the manual option comes from the quick shift throw and very positive clutch action it includes. The clutch has a clear break point and the shift throw is short and precise, making for precision engagements.

The AWD system in the WRX has become legendary and there's a reason that this car is associated so closely with winning World Rallycross teams. The torque vectoring and control is very spot-on for both on and off pavement turns at speed. Traction control off pavement is great and shifts off easily when it's not needed. The rally-focused WRX slides, flies, and throws dust like no other. The WRX is by far the best factory-made rally vehicle you can buy.

This also means that the 2016 WRX comes with a very stiff, sport-tuned suspension. Those who are not expecting that may be put off, but sports car fans will expect nothing less. 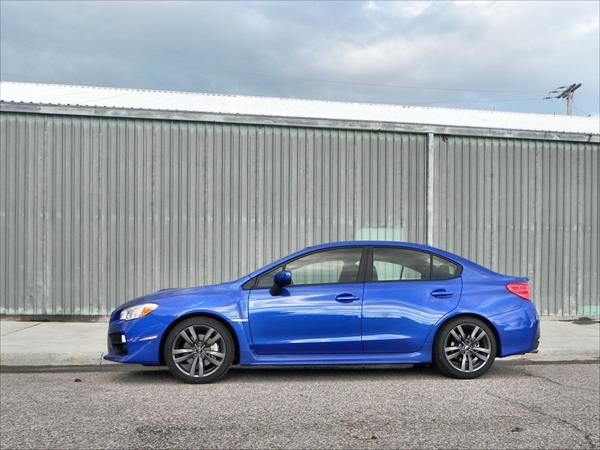 Pricing and Value (8/10)
The 2016 Subaru WRX has a good starting price that is on par with most of the competition, ringing in around $26,000 after delivery. The Premium model with extras that we drove was nearly $33,000 all told. For the price and the performance offered, though, the 2016 WRX is spot on. Add in its everyday versatility, including the capability to haul the family and get the groceries, and value is clear.

Down sides are in the interior's refinement, which takes a back burner in favor of performance in this car. For the price, some rivals offer a better interior experience and more comfort options.

Helping to counter that is the high resale value that Subaru vehicles enjoy. So all told, we feel that the 2016 WRX is a good value for the money spent. Assuming you're after a sports car whose focus is overall performance rather than drag strip power.


Total Score and Competitive Comparison (68/80, 85%)
In all, we're giving the 2016 Subaru WRX an A-. It's a great vehicle for sports enthusiasts and is, really, the only true rally car being sold on the street-legal market. For sports enthusiasts, though, there are a lot of affordable choices in the compact car market. All vehicles that can double as everyday drives as well.

The Volkswagen Golf R is more expensive than the WRX, but also has better power output and matches the Subaru's AWD. The Golf R offers similar interior space, but the versatility of a hatchback and a slightly smaller platform, making its 292 horsepower a little more potent.

In front-wheel drive sports options, contenders include the Ford Focus ST, also available as a hatchback, and with turbocharging it can easily give the WRX a run for its money. The Volkswagen GTI, similarly, offers the same, but is not quite as quick as either the Ford or the Subaru. Neither has AWD as an option.

Of these contenders, though, none match the 2016 WRX's combination of powertrain, manual shifting excellence, or off-pavement expertise. The nearest rival in this regard was the Mitsubishi Lancer Evolution, now out of production.

For its overall excellence as a rally-focused, but still everyday usable car, the 2016 Subaru WRX is unmatched.