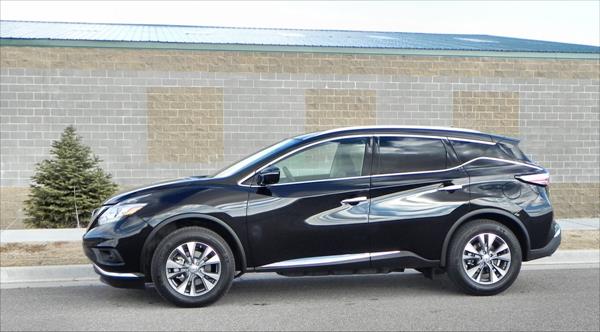 Overview (Final Score: C+)
The 2016 Nissan Murano is a continuation of the new Murano introduced last year and it remains one of the best choices in the midsize crossover segment. The Murano is eye-catching, decidedly upscale, yet somehow value-centric.

Outside of the addition of a USB port as standard and a tweak to the upper-trim Bose audio system, the Murano is the same great crossover it was in 2015. We loved it then and we love it now. The Murano continues to bring a best all-around package of excellence to the market and for that, we've given it a high recommendation in our scoring.


What We Loved About the 2016 Nissan Murano


What We Didn't Love About the 2016 Nissan Murano 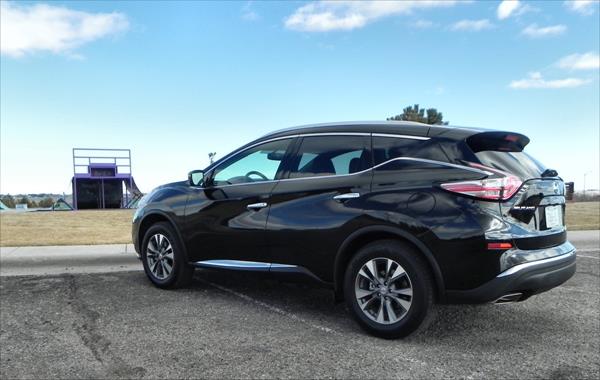 Exterior View (10/10 relative to market)
The 2016 Murano continues the strong styling introduced last year. This bold look is both polarizing and immediately recognizable. Most like the stand-out style and sinuous look that the Murano now carries. Major cues include the rounded hood, whose apex is just ahead of the windscreen, and the blacked rear pillar to create a "floating" roof to match the pinched window lines that accentuate the sporty, rounded roofline.

Strong front fenders, a busy rear quarter, and a sharp nose finish this look. Few in the midsize crossover segment can claim the kind of concept car-like look that the 2016 Murano sports.

Several options can be had to add to the Murano's strong curb appeal. The midrange SV model trim, for example, adds the integrated roof rails seen in our photos, which carry forward through the rest of the trim levels. 18-inch alloy wheels are standard on the Murano and 20-inch wheel upgrades become standard on the Platinum trim. These add a lot of bling factor to the crossover, but do impact ride comfort a bit. 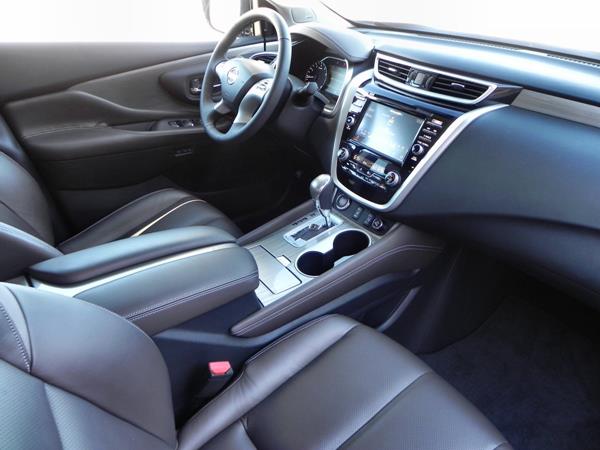 Interior Comfort, Quality, Ergonomics (10/10)
Although the exterior is the eye-catcher for the 2016 Nissan Murano, it's the interior that really deserves most of the credit for this excellent SUV's daily use appeal. Four of the five seating positions in the Murano feature Nissan's "Zero Gravity" seating as standard. These support the body carefully in a posture that mimics the sitting position of astronauts at zero gravity. It's the most comfortable you'll ever be in a vehicle. The high quality trim and excellent dashboard design are more highlights from the Murano's interior.

Soft touch materials and well-done accents take the Murano's interior up a notch. It's size and the optional panoramic roof make the big crossover feel even roomier. The lifted dash and well-set controls are boons to this feeling of escape.

In the second row, the 2016 Murano offers plenty of room for all three passengers who might sit back there, though the center seat is still mostly for kids. Despite the sloping roofline, headroom is good. The Murano does not, however, offer a third row and for many buyers, that might be a turnoff. For those extra seats, Nissan buyers have to move on to the Pathfinder instead.

There is a lot of cargo space to be had, though, and that's a definite plus. Just over 32 cubic feet of space is available behind the second row and the hatch lifts up to reveal a flat, square-ish opening that makes loading easy. With the second row folded, a full 67 cubic feet becomes available for use. It's noted that the rear seats fold almost completely flat, something some rivals cannot truly claim.


Technology (7/10)
A 7-inch display screen is standard in the 2016 Nissan Murano as the main technology interface. An 8-inch touchscreen is the upgrade, which also adds Nissan Connect infotainment. The base system offers Facebook, Pandora, and iHeartRadio integration while the upgrade to Connect offers the Nissan Connect app integration, though so far that offers little else. Nissan has promised more to go with that new app, which is available for both Android and iOS phones.

Other options include navigation, a full suite of climate controls, including rear climate, and a lot of safety options (discussed below). 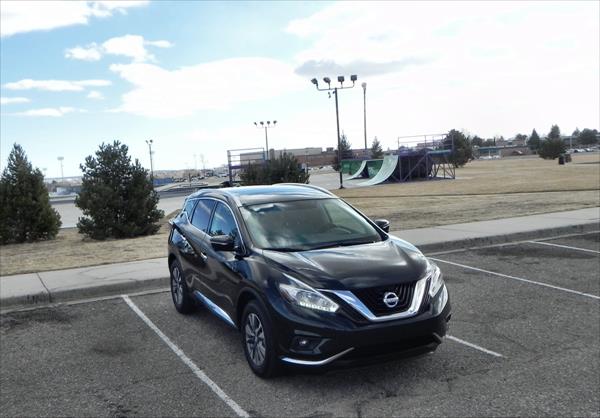 Fuel Economy (9/10)
Although the 2016 Murano comes in either front-wheel or all-wheel drive, fuel economy is rated the same with either drivetrain. The EPA gives the Murano a 24 mpg combined estimate, with 21 mpg in the city and 28 mpg on the highway. Our average during a week with the 2016 model was 23 mpg so we believe these estimates are close to the real-world.

These fuel economy numbers are better than most of the Murano's V6-equipped competitors.


Predicted Reliability, Initial Quality Ratings (10/10)
The J.D. Power and Associates Vehicle Dependability Study rates the 2016 Nissan Murano as "Among the Best" with a very high initial quality and expected reliability. There have been no safety recalls for the 2016 Murano. This carries from the nearly identical 2015 model year, which had the same J.D. Power return and only one recall, that being for the braking control unit. 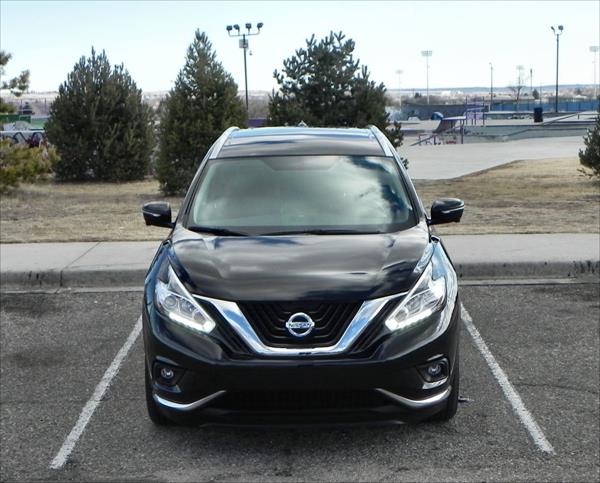 Safety (10/10)
Although the Murano has not had a full suite of test results issued from the National Highway Traffic Safety Administration, the excellent results it achieved last year along with the best-possible Top Safety Pick+ rating given to it by the Insurance Institute for Highway Safety for 2016 prompt us to give the Murano a top safety score. To achieve a TSP+ designation, a vehicle must achieve a top score of "Good" on all five IIHS crash tests plus a "Superior" for its advanced crash mitigation technologies.

Added safety features in the upper trims include a 360-degree parking monitor (called AroundView) with moving object detection. Adaptive cruise control and a frontal collision warning and mitigation system are also available, as is a new system for the adaptive cruise that sees ahead of the car in front of the Murano to better predict traffic speed changes for faster reactions.


Performance (8/10)
The 2016 Murano is powered by a 3.5-liter V6 that outputs 260 horsepower and 240 pound-feet of torque. A continuously variable transmission (CVT) is standard, as is front-wheel drive. All-wheel drive is optional. Towing is rated at 1,500 pounds when equipped, which is marginal for the class.

On the road, the Murano's engine is a good powerplant, though, delivering smooth energy in nearly all situations. The CVT is a good setup, but sometimes hesitates to ramp up RPM when a faster pace is on order. It is otherwise quiet and smooth.

On the road and highway, the 2016 Nissan Murano is an even drive with a comfortable feel. It's not as sporty or rugged as some of the competition, but it drives well and most will enjoy the simplicity of its confidence. On the freeway, the Murano is remarkably quiet for the class, though we did note that the larger wheels on the Platinum edition created a little more road noise than we'd had in a 2015 model with the standard 18-inch wheels.

Around town, the 2016 Murano is sprightly and does well in most situations. Its sharp cornering and better-than-expected visibility means it's also easy to park. The AroundView monitor option is an excellent addition for this vehicle as well. 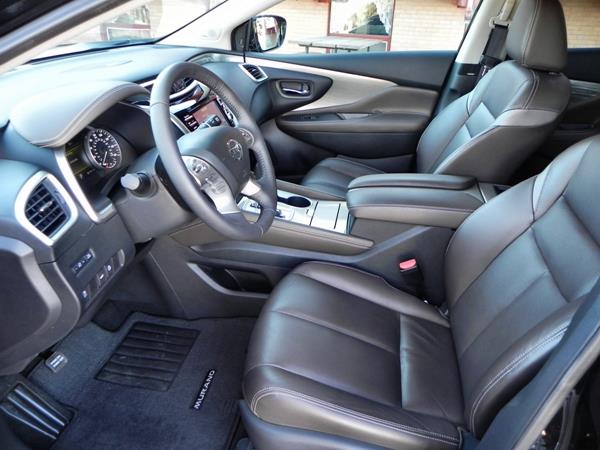 Pricing and Value (9/10)
The 2016 Murano is a solid value for the dollar. It's a very upscale crossover without an upscale price, offering a lot of comfort and style. Most will be buying in the SV or SL trims, which are priced around $32,000 to $38,000, depending on options. For this, buyers are getting a Murano that is on par with many premium crossovers above the standard segment.


Total Score and Competitive Comparison (63/80, 79%)
The midsize crossover segment has some strong competition, all of which are good choices. The Honda Pilot and Toyota Highlander are solid picks with more interior room (due to a larger size) as well as a third row. The Ford Edge also offers a third row and a fun driving experience with its EcoBoost engine choices. Finally, the value-oriented Kia Sorento is an excellent pick as well, with its airy cabin and very usable cargo space.

Among these, however, the 2016 Nissan Murano stands out for its emphasis on style and comfort. These are normally the focus of premium and luxury crossovers and Nissan has managed to bring it to the standard crossover segment without pricing themselves out of the game. There is a lot to praise about the 2016 Murano. Definitely one of the best offerings in the midsize crossover segment today.