Overview (Overall Grade after 8 Categories: B)

The open road. The wind in your hair. The freedom. The passion for driving. All are great reasons why roadsters are so popular. Yet, there are so few roadsters left on the market today. The two-seat drop top is part of nostalgia. However, the 2016 Mazda MX-5 Miata (we'll just call it Miata from here on out) harkens back to an era where driving was part of a great weekend, and the open road, and the wind in your hair were all part of the appeal. Despite a nostalgic vibe, the Miata is thoroughly modern, especially for this model year. The Miata goes through a complete redesign. It comes to market with a fresh new face, a miniscule frame and that same roadster flare that makes it so exciting and evokes such driving enthusiasm. And because it's a Mazda, it drives like few other vehicles on the road. Mazda's old "Zoom Zoom" advertising campaign was centered around the Miata and while they've all but abandoned that campaign, it still applies perfectly to this roadster. 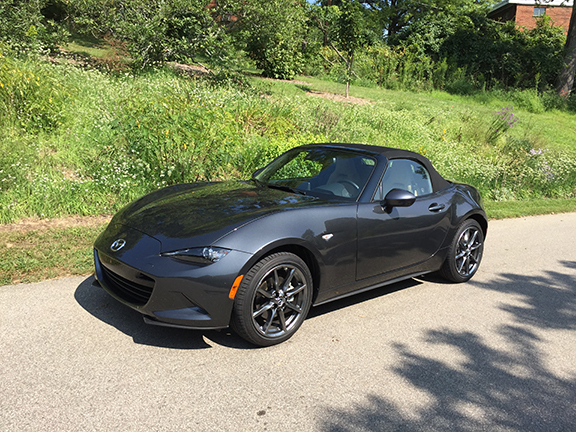 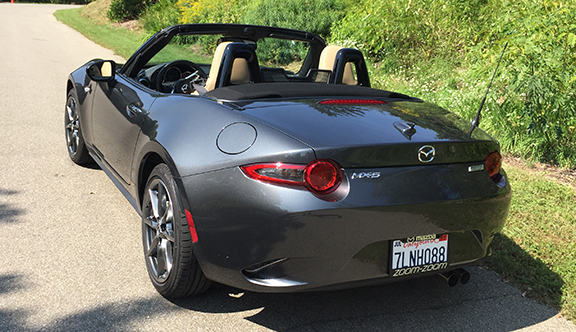 The Miata is an icon within the roadster segment. There's a great deal of passion surrounding the Miata, both for enthusiasts and for its detractors. Some believe that the Miata, at least in its previous incarnation was a little too feminine. However, with its new facelift, the Miata is timeless, and gender neutral. The redesigned Miata is now 200 pounds lighter, which is a significant weight drop for an already small car.  The short stature and low profile of the Miata give it a sleek, ready-for-the-road look. There is nothing aggressive looking about the new Miata, but this doesn't also mean it's cutesy. It's similar to how the Volkswagen Beetle has evolved. Both icons have a certain stigma, but both new iterations deserve a second chance by a wider audience. 17-inch alloy wheels jazz up the Miata. The roadster has a low profile, which makes it a challenge to exit and enter the vehicle. If you have bad knees, or are really tall, this may not be the car for you. The drop top retracts manually. It does require a twist of your body to release a lever and then push the top back and put into a rear compartment. It takes very little effort to open or close. And it can be done within seconds and while the car is moving. So many other convertibles that have an automatic open feature take a long time to open and close and can't be done while the car is in motion.


Interior Comfort, Quality and Overall Ease of Use (7 out of 10)

Knowing that the Miata only has two seats, you don't expect there to be tons of interior space. And there isn't. However, this miniscule roadster drives small (which is a good thing) but also feels small (which is a bad thing). With the top up, the head room is limited. Anyone over six feet tall may end up with a crick in their neck if they had to ride around too long with the top up. Additionally, shoulder is snug too in the racing-style seats. Driver and passenger aren't sitting right on top of each other as a well-organized and clean center area separates the two seats with enough room. Leg room is surprisingly adequate. Seats can be adjusted to account for those who are even long legged, but again, getting out of the car will be a challenge. The grand touring trim offers a lot of upgrades to materials and is the best of the trims, and still keeps the Miata at an affordable price. Soft materials are added to this model year, which surprisingly do nothing to quiet the pervasive road noise (with the top up). The loud cabin is one of the biggest detriments to the Miata. But the easiest solution is to drive it with the top down every down, which is what it's meant for anyway.

Mazda seems proud of themselves for the advancement they've made in infotainment systems. While there is certainly some improvement that has been made, the current generation infotainment system continues to leave a lot to be desired. The 7-inch touchscreen is bright and angled nicely, but there's an auxiliary control knob that is not intuitive and is quite aggravating to maneuver. The overall infotainment system is cumbersome and at times frustrating to operate. Even setting channel presets requires several unnecessary steps. Bluetooth is now standard for the Miata and there is also a USB connection for smart phone integration. With the top down, Bluetooth will be touch to use and make it tough to be heard, but at least that technology is available.

It's rare when a car is both fun to drive and fuel efficient. But that's exactly the case with the 2016 Miata. The Miata has an EPA rating of 27 mpg/city and 36 mpg/highway. This fuel-sipping roadster is a driving-enthusiast's best case scenario offering driving appeal, with limited trips to refuel.


Predicted Reliability and Initial Quality Ratings (8 out of 10)

The Miata gets high marks from JD Power and Associates with a 4 (out of 5) star rating for overall reliability. The roadster's best rated feature was in powertrain quality and the lowest rating was 2.5 stars for body and interior quality.

Small cars often are more vulnerable to safety issues. The Miata has not yet been tested by the National Highway Transportation Safety Administration or IIHS. But, there are plenty of standard safety features including antilock brakes, side airbags and traction control. The Grand Touring trim gets even more safety features including a blind-spot monitor and lane-departure warning. There is a Brembo braking package available that makes for industry-best stopping. 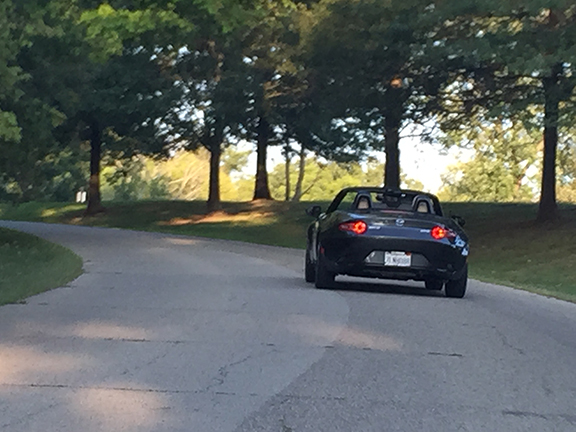 Here's the category that allows you to look past any of the flaws of the Miata and just hit the open road and truly enjoy driving. The Miata is an ideal cruiser! As a daily driver, it would make commuting fun. A 2.0-liter engine makes 155 horsepower and 148 lb./ft. of torque. Those aren't huge numbers and seem underpowered when compared to European counterparts, but the Miata way exceeds those numbers in overall performance. It's a real enthusiast-driven car. With the drop in weight, it handles amazingly. The short, squatty posture hugs the road. A manual transmission is recommended for further enjoyment, although the optional six-speed automatic is adequate, but inspires less excitement. A driver select mode changes the dynamics and performance. In sport mode, the Miata has responsive steering that will inspire a love for driving again. It's that good from behind the wheel!

The Miata is available in three trims, Sport, Club and Grand Touring. We tested the Grand Touring which has a base price of $32,090. The base model Miata, which should pacify most roadster enthusiasts, starts at $26,000, making this car a lot less expensive than other similar European counterparts. 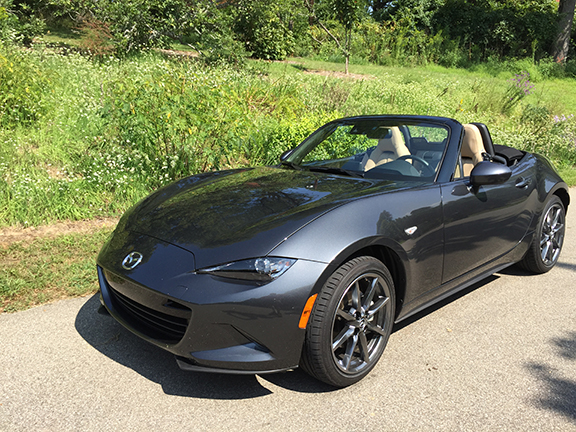 There are very few cars more suited for the open road than the Miata. This nostalgic throwback, with modern looks, will re-inspire an American consumer that seems to have lost their passion for driving. This roadster has all new looks, a smaller size, a redesigned engine and is one of the most fun vehicles you will ever drive.