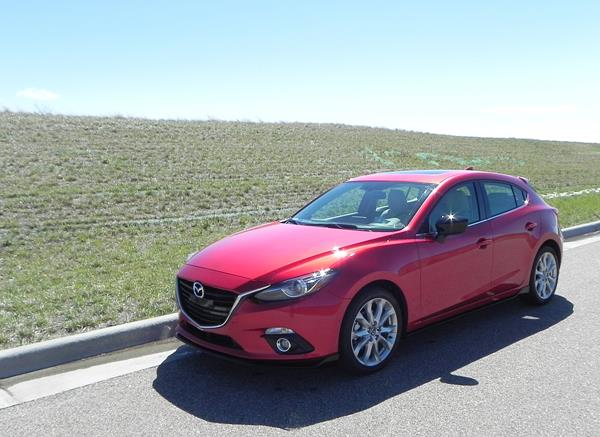 Overview (Final Score: A)
The 2016 model year brings slight changes to the Mazda 3, most of which are fine tuning its market position rather than making real changes to this stellar little car. Available in either sedan or hatchback ("wagon") form, the Mazda3 is a truly great compact.

Standard this year is a rearview camera along with several trim upgrades to add driver convenience. The 3 continues forward with its award-winning interior, spirited drive, and high safety standards to include advanced features not often found in this segment.

This car, especially in its roomy wagon format, is a definite top choice that should be on every compact car shopper's list to test drive. 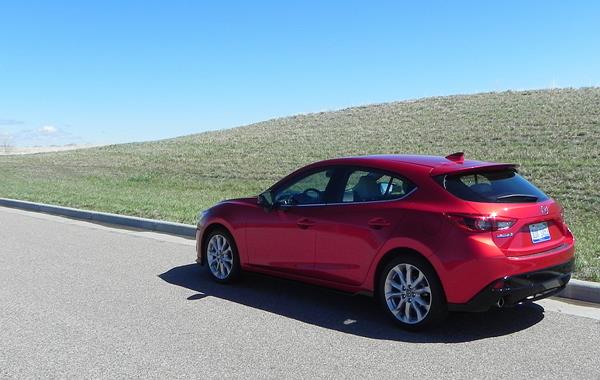 Exterior View (10/10 relative to market)
In the compact segment, there are a lot of good-looking cars and hatchbacks, but few have the timeless styling and flowing look of the Mazda3. It starts with the basic shape, which has a long, saloon-like hood flowing into a fast-paced roofline and ending in either a clipped fastback-style deck or a rounded, speedy wagon. Accent lines over the fenders, which flow downward into the bodywork, perpetuate this flow.

The front grille has Mazda's signature smiling "Zoom Zoom" swoop flanked by peering headlamps which are partially overhung by chrome pieces from the grille's edgework like eyebrows. The hawkish look to the front fascia plays well into the 3's overall speedy styling.

The 2016 Mazda3 is definitely a fast-paced little compact from the exterior. 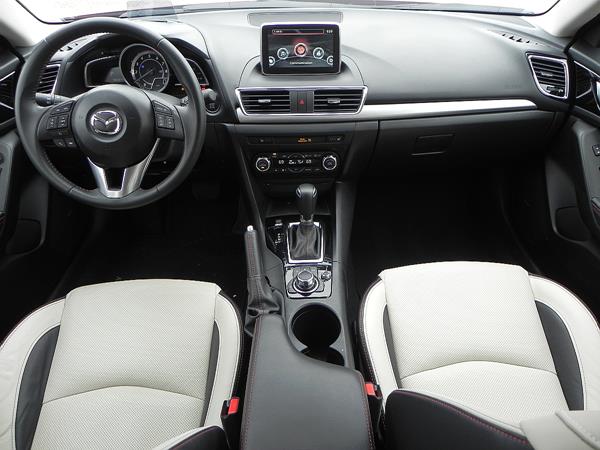 Interior Comfort, Quality, Ergonomics (10/10)
The 2016 Mazda 3 carries forward with the 2015's award-winning interior design. Given the coveted Ward's 10 Best for its interior, there was nothing to change in the 2016 model except to add features. The 2016 model year sees the rearview camera made standard, along with upgrades to most trim levels to include more driver convenience features like automatic headlights and a sunroof.

Seating in the Mazda3 is very good, though like most compacts, it requires one to bend down and fall in and then climb back out to exit. Once in place, though, the driver and front passenger are greeted with by far the best seats in the segment, with just enough cushion and bolstering to keep even the most spirited driver in place. Plenty of adjustment seal the deal.

The back seats are roomier than might be expected of a compact, though a few competitors are a bit roomier. Regardless, all but the largest adults will be able to sit comfortably in the back. Cargo space is also good at 12.4 cubic feet for the sedan's trunk and 20.2 cubic feet in the wagon (47.1 with the rear seats folded).


Technology (10/10)
The 2016 Mazda Mazda3 has one of the best infotainment systems in the industry. Two key items make this so: a relatively right-sized touchscreen display and a well-placed control knob below the shifter. The former is hard to find in the segment, but the combination is found nowhere else. Adding to this, Mazda's infotainment user interface is straightforward and intelligently done. The touchscreen works while the vehicle is parked, allowing a redundant and (sometimes) more intuitive use for things like pointing to spots for navigation or choosing a phone number from a simulated keypad. On the go, the knob interface makes paging through menus and making selections fast while the usual redundancies such as the volume control/channel changer button are intuitive. Our only complaint is that the latter can be bumped by the front passenger on occasion due to its placement. 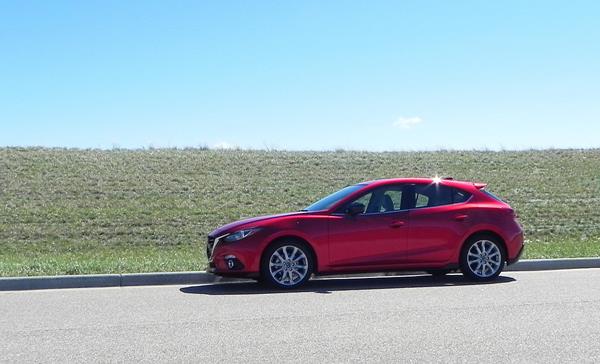 Fuel Economy (10/10)
Another strong suite for the Mazda 3 is its fuel economy. The base engine has an EPA-estimated 34 mpg combined, with 30 mpg in the city and 41 mpg on the highway with the automatic transmission and similar (33 mpg combined) with the manual transmission.


Predicted Reliability, Initial Quality Ratings (8/10)
The Mazda brand is now enjoying a reputation for high expected quality and reliability. The Mazda 3 received an "About Average" rating, however, for the 2016 model year from the J.D. Power and Associates Vehicle Dependability Study. So we've lowered its expectation a bit. There has been one early recall for the 2016 Mazda 3 and the warranty coverage on the car is about average for the segment.


Safety (10/10)
The compact car segment is competitive in safety nowadays, but the 2016 Mazda Mazda3 still manages to stand out for its unusual inclusion of optional high-end safety equipment. This has meant it was not only eligible for, but received the highest-possible Top Safety Pick Plus rating from the Insurance Institute for Highway Safety. Not only did it score a best "Good" rating on all crash tests, but also that it includes options for working advanced safety features.
10
Similarly, the National Highway Traffic Safety Administration has given the Mazda3 a 5-Star Overall rating for safety. 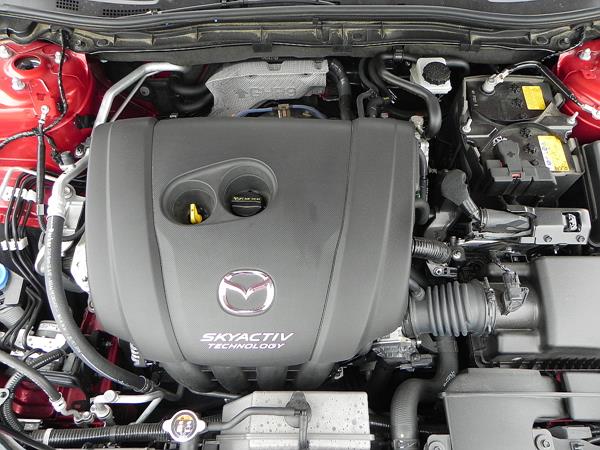 Performance (9/10)
There are faster paced cars in this segment, but few have the overall refinement of the Mazda3. The base engine is a 2.0-liter four-cylinder that outputs 155 horsepower and 150 pound-feet of torque. A six-speed manual transmission is standard and a six-speed automatic is optional. Most can expect to achieve 0-60 mph times of around 8.5 seconds with either transmission and this engine.

The upgraded engine is a much more sporting 2.5-liter fourcylinder turbocharged to 184 horsepower and 185 lb-ft of torque. The manual transmission is standard on all but the Touring model, which includes the six-speed automatic that is otherwise optional. 0-60 mph times of 7.5 or so seconds are easily do-able in this car.

What makes the Mazda3 so loveable is not its powertrains, but instead its sporting nature. No matter the configuration, the Mazda focus on "Zoom Zoom" is always there with tight steering, a smart suspension, and a fast-paced appeal. This is a large part of what makes the 2016 Mazda 3 a great little car over and above its class-leading goodies.


Pricing and Value (9/10)
The 2016 Mazda Mazda3 has a lot of excellence at its base level, which is slightly more expensive than some of the competition's base offerings. In terms of value, however, it's often a better choice because of those inclusions. The base Sport model can be reasonably priced at around $19,000 with a nice array of goodies included. Most should consider the next step up at around $21,000 as the Touring package has better accouterments and an automatic transmission for that price.

Total Score and Competitive Comparison (76/80, 95%)
The compact car segment has been heating up in the past couple of years with a lot of great offerings coming to market. The segment leaders are the Ford Focus, Honda Civic, and Toyota Corolla. Of these, only the Focus is as compelling as the Mazda3 is with its similarly-sized hatchback offering and sporty nature. The Civic has a larger interior and the Corolla enjoys a reputation for long life, but neither is as fun everyday as is the Mazda. Finally, if value is your primary concern, the Kia Forte is another newly-updated and compelling choice.

In the end, though, shoppers who consider the 2016 Mazda 3 will not be disappointed and are likely to change their minds about what it is they want from their compact ride. The Mazda 3 takes the daily "A to B" grind and makes it exciting. An easy top choice in our book.