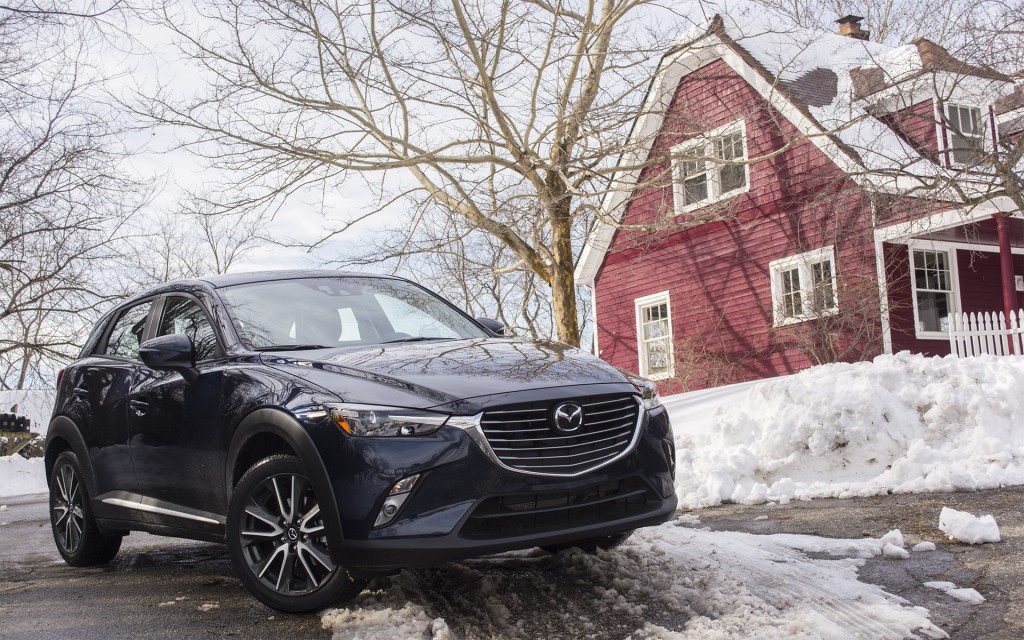 Despite Mazda being one of the smallest automakers, they have consistently produced vehicles that not only stand up to models from larger automakers, but also have beaten in them in certain classes. A perfect example is the Mazda MX-5 Miata. Introduced in 1989, the Miata brought back the idea of an affordable roadster from the fifties and sixties, and added reliability. A number of automakers tried to build a competitor to the Miata, but they all seem to fall flat for one reason or another. This is why many consider the Mazda Miata in a class by itself.

Mazda hopes to do something similar as they enter the growing subcompact crossover marketplace with the CX-3. It has Mazda's SkyActiv technologies which should give it edge in fuel economy, along with the driving fun the brand is known for. But is that enough to stand out? 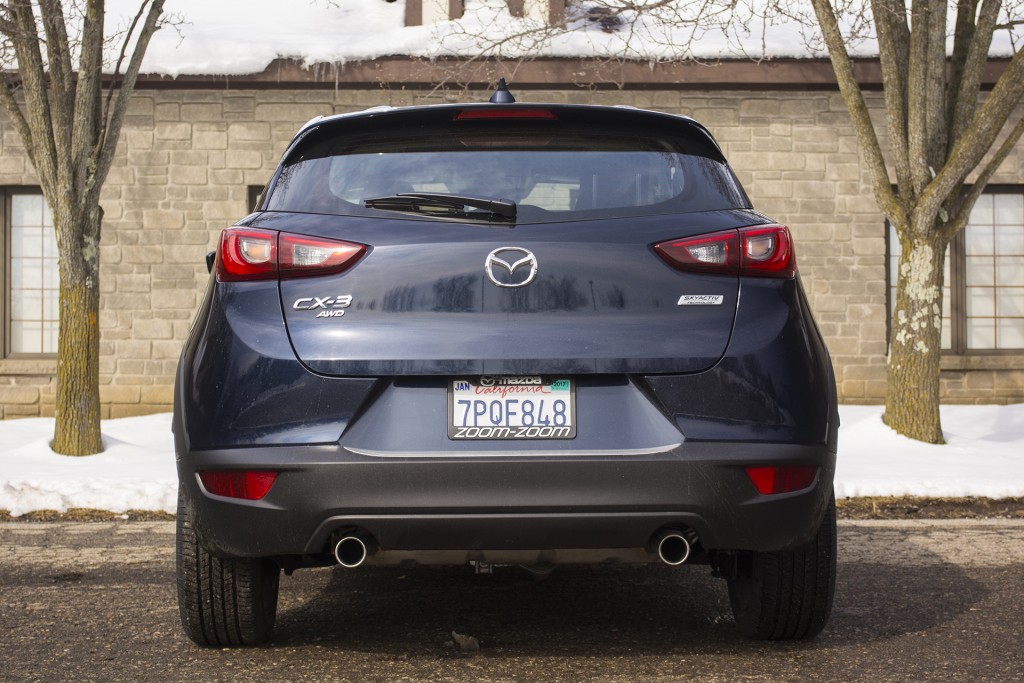 The past few years have seen Mazda produce some of the sharpest looking vehicles in classes where vanilla is the flavor of the day. The CX-3 is no exception to this. The overall look fits in line with the larger CX-5 and the upcoming CX-9 crossover. It also makes the CX-3 look somewhat larger than a subcompact crossover. Up front is a large grill with chrome trim running along the outer edge and into the headlights. Along the side is a flowing line under the windows that give the impression of an ocean wave. Wheel sizes range from 16-inches on the Sport and Touring to 18-inches on the Grand Touring. 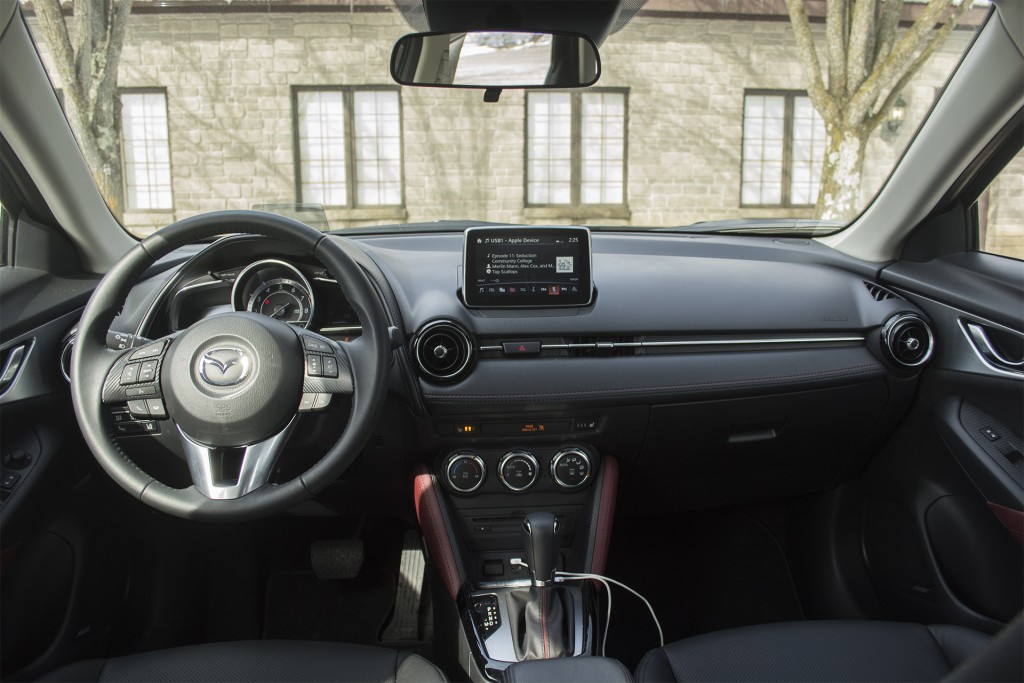 While the exterior of the CX-3 can make you believe it's larger than a subcompact, sitting inside of it dispels this notion. Overall passenger space can be best described as intimate. The front seats are quite firm and feature side bolstering to hold you in if you decide to play around. You have a small number of adjustments for the seat and the steering wheel offers tilt and telescope. Back seat space is quite tight for the class. I happen to be 5'8" and I found that I had little space for my head and legs. Anyone taller than me would be crying uncle.

In terms of interior design, Mazda has most of the competition beat. A sleek dashboard features a small chrome bar between two air vents and contrasting colors for various pieces of the soft-touch plastics. Controls are within reach and have a solid feel. 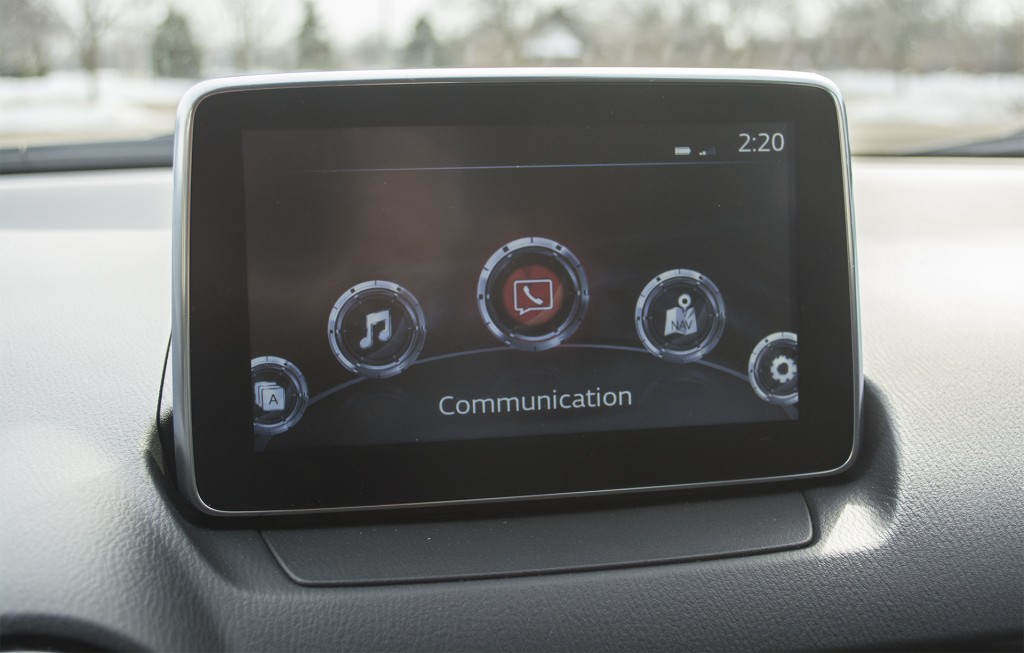 The CX-3 Grand Touring comes chock full of technology. It starts with an instrument cluster that features screens flanking the tachometer and digital speedometer. The screens provide basic information such as fuel gauge, total mileage, and trip computer details. Above the instrument cluster is a heads-up display (HUD) system. Unlike most HUDs which project information directly onto the windshield, Mazda's system uses a piece of clear plastic that rises up from the dashboard and displays key information. The clever part about this implementation is the plastic is placed between the driver and windshield. This gives the driver the illusion that the information is being projected on the windshield. We only wished there was a way to adjust the height of the projection as we found information was being cut off due to how we had setup the driver's seat.

All CX-3s come equipped with the Mazda Connect infotainment system that includes a seven-inch color touchscreen, Pandora and Stitcher internet radio integration; SMS delivery, and automatic emergency notification. There is also Bluetooth connectivity and inputs for AUX and USB. The Grand Touring is the only trim that comes with navigation. The system is somewhat dreary to look due to the color choices (various shades of gray, paired with red, black, and white), but performance is top notch.

Along with the touchscreen, there is also a knob in the center console that is used to control the infotainment system. Using the system is somewhat of a headache. For example, there are various screens where the touchscreen doesn't work. If you want to pause or skip a track on your USB or Bluetooth device, you can hit the corresponding button on the screen and it will work. But if you want to scroll through a list of tracks, touch inputs will not work. It is bizarre that only certain parts of the system only work with touch. Also, we found that the system wouldn't always recognize our touch inputs. So we would have to hit the screen a few times for it to work. The preferred way is to use Mazda's infotainment system is with the control knob. At first, you find it a bit fiddly to use and wish there was an easier way to control the system. But given some time and practice, this control method becomes second nature. There is a voice recognition system, but it is hit and miss.

The Mazda CX-3 is towards the top when it comes to fuel economy. The EPA rates the CX-3 with front-wheel drive at 29 City/35 Highway/31 Combined. The all-wheel drive CX-3 sees a slight drop in fuel economy with ratings of 27 City/32 Highway/29 Combined. Our average in the CX-3 AWD landed around 26 MPG.

It should be noted our CX-3 tester wasn't fully broken yet - it only had 1,006 miles on the odometer. If we had a few more miles on it, we wouldn't be surprised if the numbers climbed to 29 or possibly 30 MPG. 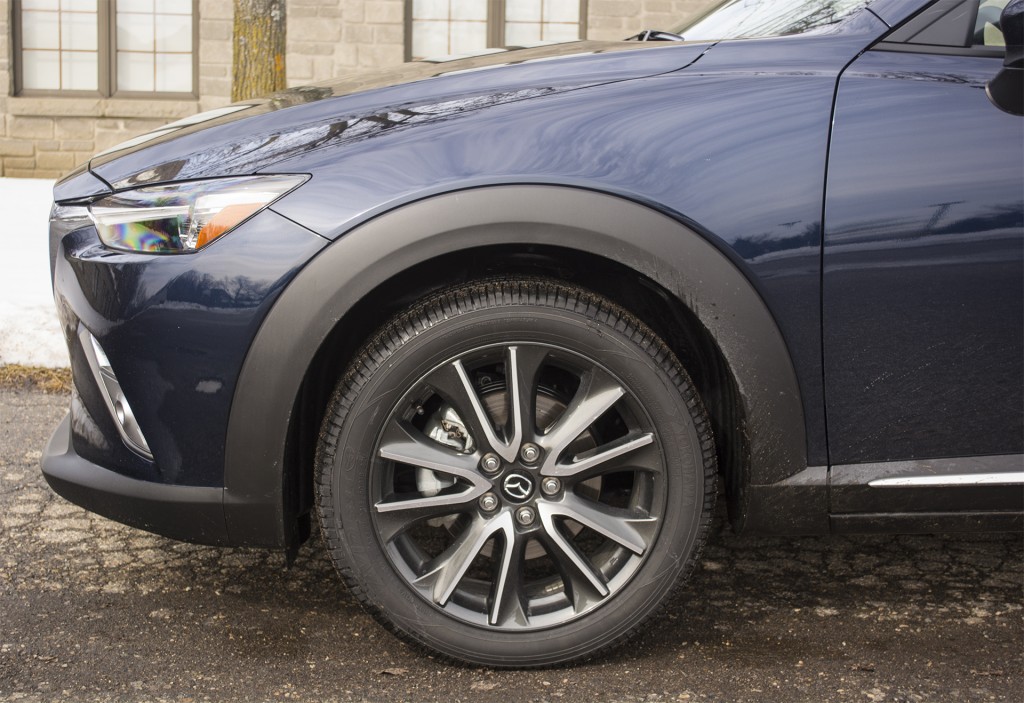 There isn't a lot of reliability data for the Mazda CX-3 because it only went on sale a few months ago. But we can say Mazda as a brand has a very good track record when it comes overall reliability. The past few years have seen the Japanese brand towards the top in overall reliability studies. We can also get a clue as to how the CX-3's powertrain will fare. The 2.0L four-cylinder and six-speed automatic combination found in the CX-3 is available on the Mazda3 and CX-5. In both models, the combination has proven to be very reliable. 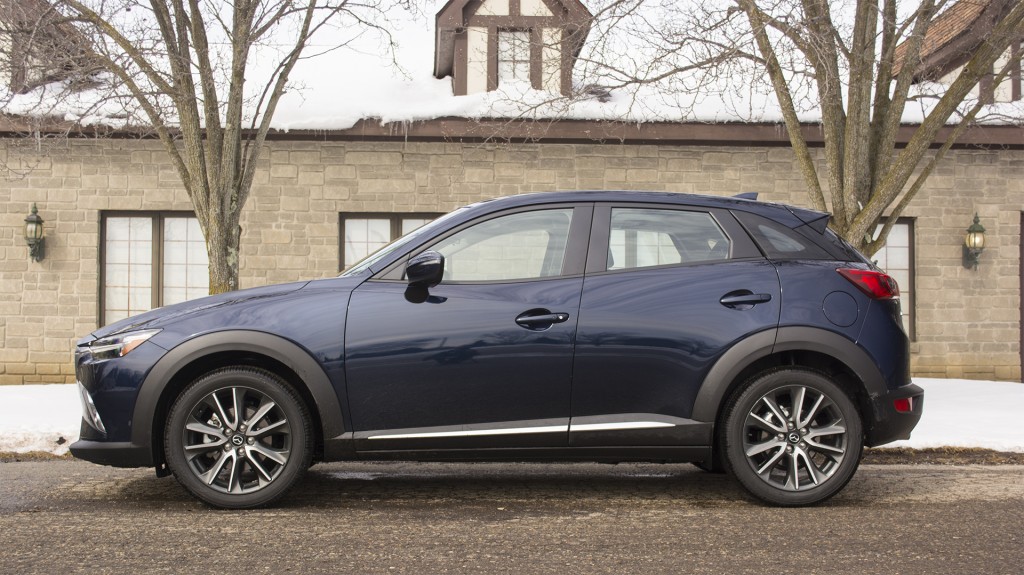 The Mazda CX-3 hasn't been tested by either the Insurance Institute for Highway Safety or the National Highway Traffic Safety Administration. But CX-3 does come with its fair share of safety equipment. All models get front and side curtain airbags, stability and traction control; and a back-up camera. The mid-level Touring adds blind spot monitoring and rear cross traffic alert. Grand Touring models get adaptive front headlights. Optional for the Grand Touring is Mazda's i-ACTIVSENSE package. This includes a number of safety equipment such as lane departure warning, radar cruise control, Smart City Brake Support (prevents or minimizes a low-speed frontal collision by applying the brakes if the vehicle detects an obstacle), and Smart Brake Support (similar to the City system, but it activates at speeds over 10 mph). 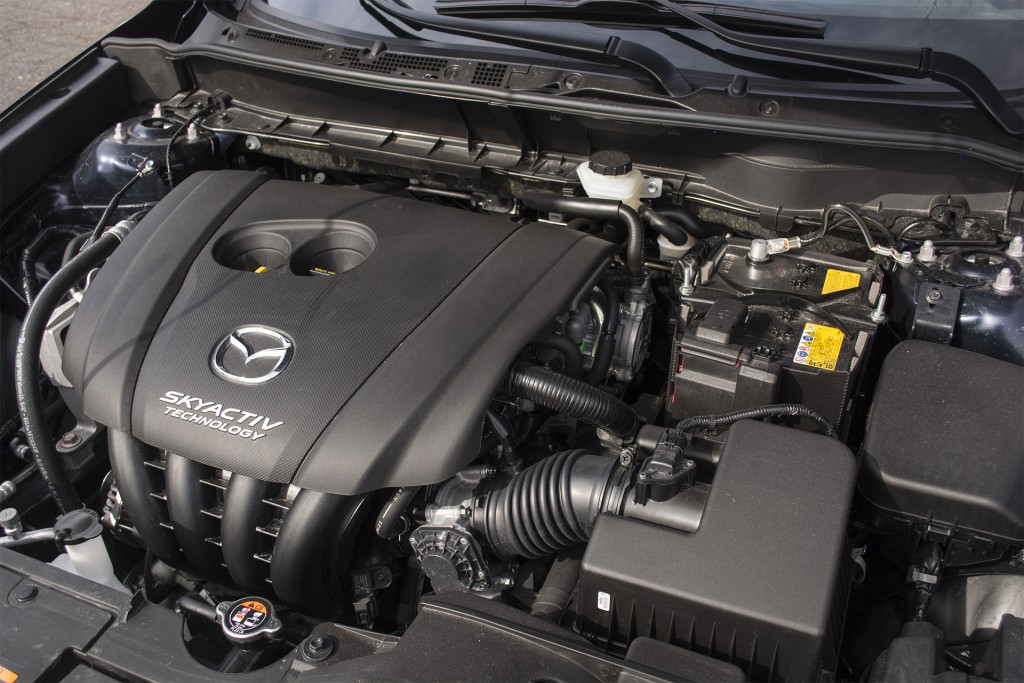 All CX-3s come with a 2.0L Skyactive-G four-cylinder engine with 146 horsepower and 146 pound-feet of torque. This is paired to a six-speed automatic and the choice of either front-wheel or all-wheel drive. The engine provides decent acceleration when leaving a stop and feels quite spritely around urban areas. The expressway is a different story as the 2.0L struggles to get up to speed at a decent rate. The six-speed automatic is lightning fast with up shifts. It is a little bit slow to downshift, but you can counter that by using a set of paddles behind the steering wheel.

This CX-3 came with Mazda's i-ACTIV all-wheel drive system that claims to predict road conditions and adjust the system as necessary to keep you on the road. Is this just some marketing speak? No. The i-ACTIV system is able to predict conditions thanks to 27 different sensors around the vehicle that feed information to the system. For example, if you turn on the wipers, the system knows it is raining or snowing and will make various adjustments to the system. We had the chance to put this system to the test as the Detroit area got blanketed with a fair amount of snow. On unplowed roads with six to ten inches of snow, the CX-3 went through it like it was nothing thanks to the system making constant adjustments. Even when the vehicle was stopped, the tires would spin for a moment before the all-wheel drive kicked in and got us on our merry way.

Being a Mazda, you would expect it the CX-3 to be fun to drive. It doesn't disappoint in this regard. Body motions are kept in check and it feels very predictable in the corners. Steering has a nice combination of weight and feel that will impress the most demanding of drivers. On the daily commute, the CX-3's ride is compliant with some bumps entering the cabin. The small size and tight turning radius makes the CX-3 very maneuverable in tight spaces. Where the CX-3 falls flat is in noise isolation. There is a fair amount of road noise entering the cabin. Wind noise is kept to acceptable levels.

The 2016 Mazda CX-3 starts at $19,960 for the base CX-3 Sport with front-wheel drive and climbs to $26,240 for the Grand Touring equipped with all-wheel drive. Our CX-3 Grand Touring all-wheel drive came to an as-tested price of $29,260 with a few options. This makes it one of the more expensive models in the subcompact class. But we don't think the Grand Touring trim is a good value. Compared to the mid-level Touring, the Grand Touring only adds a small number of features such as leather, heated front seats, navigation, Bose audio system, and adaptive front lights. Some of these features such as the Bose audio system can be optioned on the Touring. Also for around the as-tested price for our CX-3, you can jump into a nicely equipped CX-5 which offers more space. 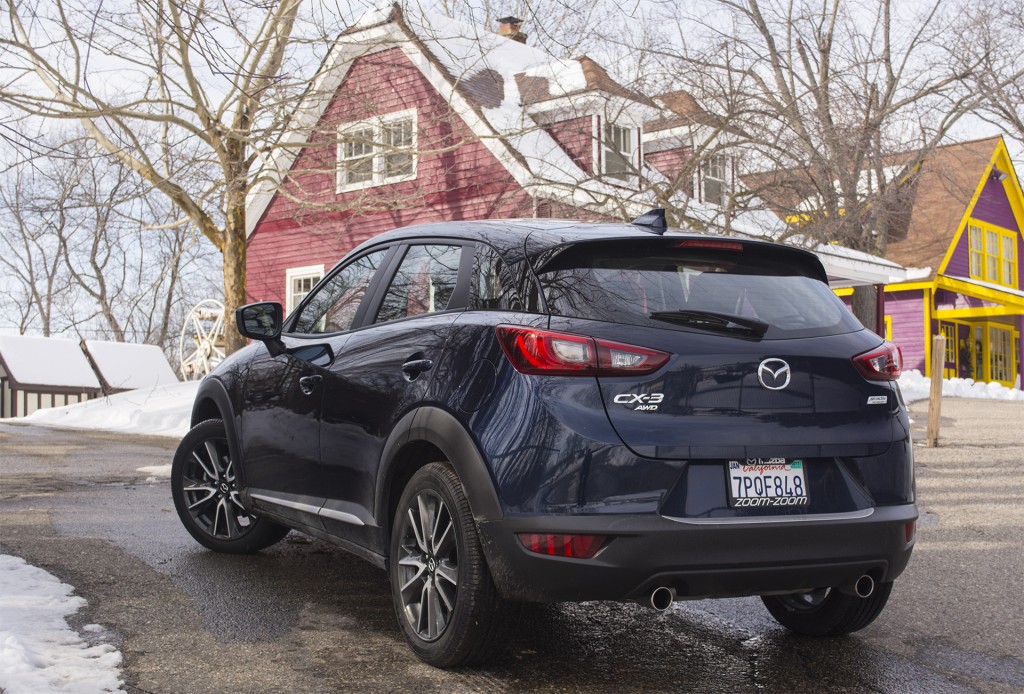 Mazda has done it again with the new CX-3. This is a model that stands out from the growing crowd of subcompact crossovers with a distinctive design, advanced all-wheel drive system, and driving dynamics that runs circles around the competition. But models such as the Chevrolet Trax and Honda HR-V offer more interior space and have a slightly smaller price tag. The Jeep Renegade is the only model in the class that offers true off-road capability. However, it also suffers from a poor value proposition in higher trims like the Mazda CX-3.

If you are single or a couple that is looking at a subcompact crossover, give the Mazda CX-3 a close look. Small families should look at the Chevrolet Trax and Honda HR-V before checking out the CX-3.