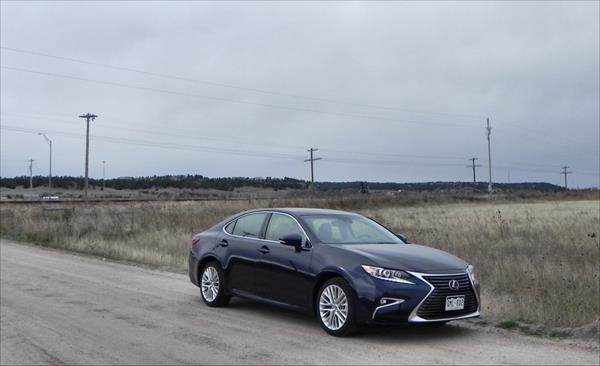 Overview (Final Score: A)
For a few years now, the Lexus ES series has been the benchmark for luxury sedans of all stripes. It's not too large, not too small, and relies on its balanced blend of refinement and luxury to carry the day.

The ES 350 has a good mixture of fuel economy, performance, and interior excellence to make it an easy choice for the segment. In reviewing the 2016 ES 350 this year, it was easy to give it high scores on the important counts and happily mark an "A" on its report card.

Few cars have the class, dignity, and value that the Lexus ES series holds. 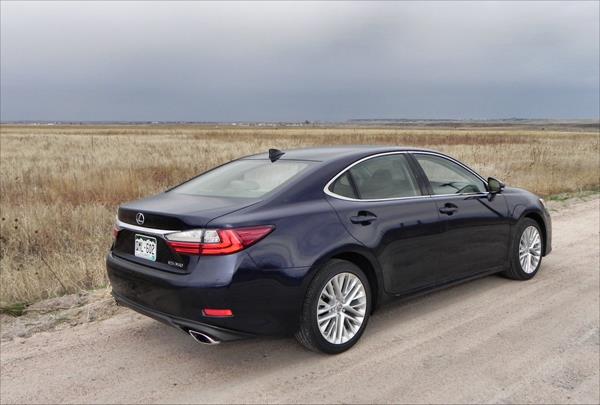 Exterior View (8/10 relative to market)
In terms of its looks and exterior appeal, the Lexus ES 350 is far more conservative than many in the luxury sedan segment. Lexus, especially with this best-seller in their lineup, tends to stay away from the edges of the boat, planting their designs firmly at the center of things. This does not mean that the ES 350 is an ugly car, of course, only that in a parking lot full of its rivals, it will fall somewhere towards the less interesting side of things.

Elements of the overall Lexus look begin with the ES 350's grille, with its signature Lexus hourglass shape dominating the front fascia. To either side sit thin, elongated headlights above and accented foglamp bezels below. The hood has a rounded, upward curve and light lines along either side for accents.

A generally coupe-like body style is the overall shape of the Lexus ES 350, with a shortened trunk and flat rear end. The body is simple, generally unadorned, but classy thanks to the light bulges of the wheel wells and the European striping created by the glass above the beltline. Beautiful wheel options are available to augment this. 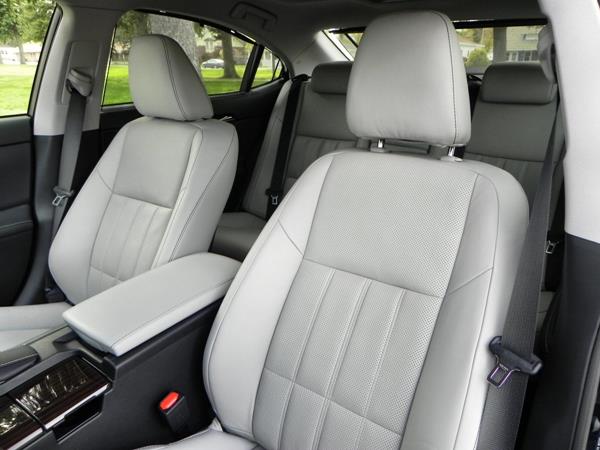 Interior Comfort, Quality, Ergonomics (10/10)
The strong point of nearly all Lexus models is the interior. The ES 350 is the maker's trendsetter in this regard with an elegant, modern interior that offers luxurious class throughout. Added for 2016 are some interior trim combinations that can create a more European appeal or keep the dark, rich feel of earlier years.

Materials quality throughout the cabin is best of breed and a sumptuous feel marks it apart. The base level upholstery is a well-made perforated vinyl while different leather and a new "flaxen" option are also available.

Seating is excellent in all four major positions with the center of the rear seat being capable of handling a third adult or a child safety seat, though not as comfortably. Front seating is excellent with plenty of adjustability and a lot of positioning options for the driver. Roominess is key in the ES 350 and is found everywhere, including the rear seats, which have class-leading legroom. Head room is good in the back seats, though taller folks might feel a little squashed due to the roof's heavy taper back there, but at six-foot three inches, I had little trouble getting comfortable in the back.

Trunk space is good at 15.2 cubic feet, but the rear seats do not fold down, so you're limited to the pass-through at center for long, thin objects as your only resort if the trunk isn't quite adequate. For most in the luxury market, that's not a limitation. 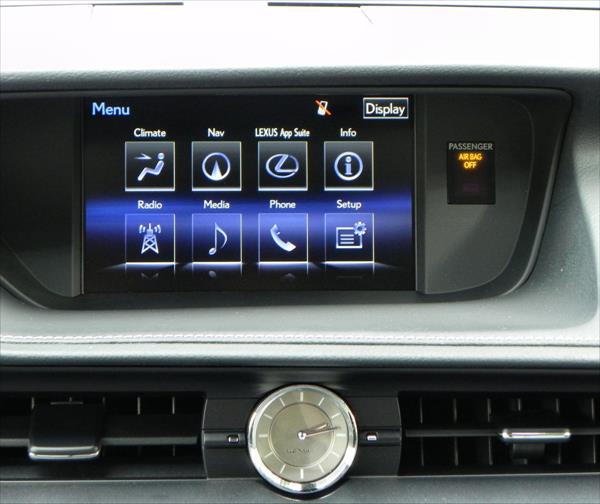 Technology (7/10)
Technology in the 2016 Lexus ES 350 begins with the standard Display Audio system on a 7-inch touchscreen. This interface includes Bluetooth connectivity, Siri Eyes Free for iPhone users, and an eight-speaker sound system with satellite radio and HD. Control is through the touchscreen or a central control knob on the dashboard. The knob is positioned awkwardly for use and the touchscreen is far up and away from the driver, deeply inset into the center of the dashboard. These inconveniences are remedied with the Remote Touch upgrade, but the Display Audio system is actually easier to operate otherwise.

The Remote Touch upgrade adds a mouse-like interface ahead of the armrest and this year that controller adds two side buttons that act as a "select" command similar to the mouse-style controller push. The upgrade to Remote Touch also brings the screen to an 8-inch display that loses its touchscreen capability as well as the central control knob. This system adds navigation, voice controls, enhanced Bluetooth, text-to-speech functionality, and connection to the smartphone-enabled Enform apps suite. It also brings a superb 15-speaker Mark Levinson sound system to the ES 350.

The Enform suite is well done and adds a lot of cool options to the car, including some remote options for smartphone control to preset climate and other things before getting into the car. The setup with Enform is a bit clunky and time-consuming, but once done, it works very well. Sadly, this does not improve the hokey control interface of the basic Remote Touch system. Interestingly, a simple upgrade to a more mouse-like movement of the selection indicator on the screen would vastly improve its use, making it far more intuitive.


Fuel Economy (8/10)
The 2016 Lexus ES 350 is EPA rated at 24 mpg combined. The single choice of one engine and one transmission means that the 21 mpg city rating and 31 mpg highway rating are the best available for the car. These are respectable numbers in the V6-powered luxury sedan segment the ES 350 resides within, but are by no means stellar. During our week with the car, however, we did manage to achieve results close to those estimates.

The hybrid option for the ES, the 300h, achieves an excellent 40 mpg combined rating from the EPA (40 city, 39 highway) and our experience in this vehicle last year proved that as a realistic estimate of the car's fuel-sipping. 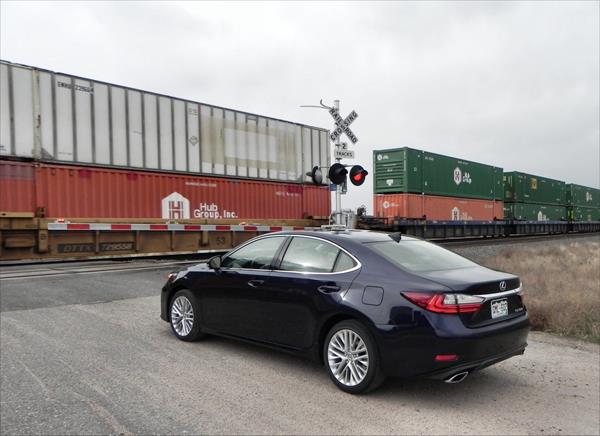 Predicted Reliability, Initial Quality Ratings (10/10)
Historically, the Lexus ES 350 has enjoyed high reliability and initial quality ratings. This generation of the car is no different. The J.D. Power and Associates Vehicle Dependability Study ranked the 2015 model as "Among the Best," giving it the highest ranking in the class. With that backing plus the fact that no recalls have been performed on this generation of the car, we add in the high expectation for dependability that the Lexus brand has and let it all add up to a top score for quality.


Safety (10/10)
The 2016 Lexus ES 350 received a Top Safety Pick+ rating from the Insurance Institute for Highway Safety, their top rating. It received top scores of "Good" on all crash testing and the available advanced and active safety features gave it the coveted Plus rating as well.

This generation of the Lexus ES 350 is also rated with a full 5-Star overall score from the National Highway Traffic Safety Administration. The car received five stars for all tests except the rollover safety, for which it received four.


Performance (9/10)
The 2016 Lexus ES 350 is not considered a performance sedan, but as a luxury sport sedan, it performs very well. It carries a spirited feel on the road that does not detract from its refinement.

The engine powering the ES is a 3.5-liter V6 that outputs 268 horsepower and 248 pound-feet of torque. This turns a six-speed automatic transmission and, through that, the front wheels.

Out on the road, the ES 350 has a solid, smart feel and a confident affect in corners and when accelerating around traffic.

A hybrid option for the ES is also available, sold as the ES 300h. This is powered by a 2.5-liter four-cylinder engine and electric motor combination that produces 200 horsepower, also in front wheel drive. This hybrid has a less muscular acceleration dynamic, but feels more balanced overall thanks to the lighter weight engine and batteries at chassis center as well as the somewhat tighter suspension to accommodate their extra weight. 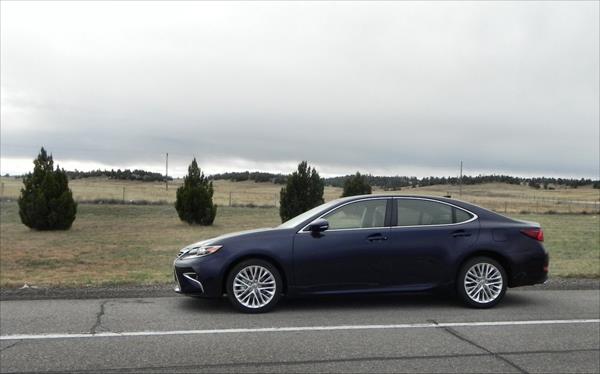 Pricing and Value (9/10)
The Lexus ES 350 comes with a lot of luxury and appointment for its base price tag. Adding in more options only raises the value. Lexus enjoys a better resale value than most luxury vehicle makes and the ES is the best-selling Lexus for a good reason.

The value proposition for the 2016 Lexus ES 350 is solid and few will feel they've wasted their money with this buy. We do recommend shying away from the very expensive navigation package (about $2,600) unless you plan to use the added technology regularly. The advanced safety options can be had separately and for those looking for high refinement, the $3,500 or so spent for the Ultra Luxury package is fairly priced.

In general, the 2016 ES 350 is a solid value proposition on most fronts and the extra fuel economy is worth the premium to get the 300h hybrid if you're inclined.


Total Score and Competitive Comparison (71/80, 89%)
The luxury sedan market is beginning to bloom once again, seeing more buyers. Those vehicles that ride closer to the entry level price point, like the ES 350, are faring better than those who do not. The Lexus has few true rivals, as most in this class either aim for uber-luxury (with a price tag to match) or for performance instead. The ES sits in between those points and does well for it.

Close competition comes from the Acura TLX, Cadillac XTS, and the surprising Hyundai Genesis. All three of those options have an all-wheel drive choice, which may appeal to some drivers. Their price tags will vary a bit ahead or behind the ES 350, though, and none of them enjoy the kind of reputation for reliability that Lexus does.

In all, the 2016 Lexus ES 350 continues to carry itself as a balanced choice among luxury sedans. It's well-liked for its understated nature and excellent interior. The quiet dignity it carries itself with on the road is also hard to match.