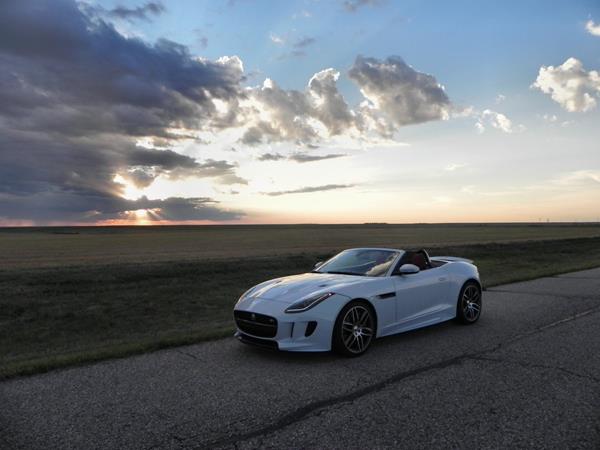 Overview (Final Score: A)
The 2016 Jaguar F-TYPE comes with three engine options, two transmissions, and a choice of rear-wheel or all-wheel drive. It's a two-seat sports coupe or convertible with a very powerful presence that relies largely on universally appealing visuals and an almost tactile engine note to get its point across.

The F-TYPE is one of the most beautiful cars on the road and its unmistakable British appeal is a lovely mixture of new, cutting-edge technology and old world hand-crafted excellence. This Jaguar is at home both gliding down the country lane towards the club on a weekday afternoon and squealing around corners on a racetrack at breakneck speeds on the weekend.

Top down or up, the 2016 F-TYPE is a ride that is never forgotten and always a pleasure. This car represents everything great about motoring today, all in one breathtaking package. 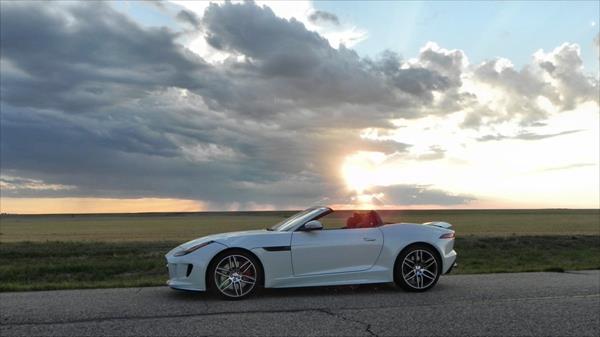 Exterior View (10/10 relative to market)
The exterior of the F-TYPE is a juxtaposition of complicated simplicity. On the whole, the car is like a well-written sonnet, with a grade school rhyme that masks a much deeper, more complicated undertone. The Jaguar F-TYPE carries a lot of detail that, when seen on the whole, has an uncomplicated grace. It's the pinnacle of artistic expression, where the master's hand makes it appear easy, almost unremarkable. But for its pure excellence.

A sharply sloping, almost saloon-like hood covers a wide body stance marked by the light bulge of the front fenders. The sleek body carries back without heavy lines or adornment, with only the cut of the running board giving lines to the side panels.

At the rear, the fenders flare suddenly and heavily, denoting the thick power behind the wheels as the haunches visibly bunch up along the rear deck, which mimics the hood for its curvature. An automatic, hidden aerowing comes up when the car is at speed. Four exhaust tips poke out at the bottom of the rear, acting as the trumpets for the inner beast in this Jaguar.

The F-TYPE Coupe model has a fast, flowing roofline while the convertible ends abruptly at the windscreen with only crash hoops behind the headrests to break up the flow to the rear deck.

The 2016 Jaguar F-TYPE is a beautiful machine with nary an element to mar its perfection. 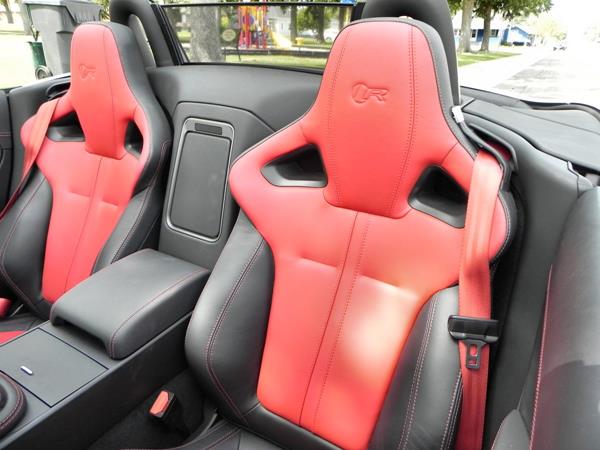 Interior Comfort, Quality, Ergonomics (10/10)
Two-seat sports cars are not usually applauded for their roominess or comfortable interiors. This Jaguar, however, is not like most two-seat sports cars. Seating is very accommodating and very roomy, with more adjustment than might be expected from a cabin this size. Shoulder room is especially good in this car and the driver's seat leans back and shifts up or down with a goodly amount of range.

All of the materials in this excellent tribute to British engineering are top notch without exception. Leather, plastic, chrome, and aluminum all come together in a beautiful package of elegant, sport-focused driving.

The driver's controls are very well-placed with the pistol-grip shifter and sport-tuned steering wheel being shaped for fast use. The rising air vents at the top of the dash and the excellent use of materials and placement throughout the cabin finish it all. Design for elegance and excellence is seen throughout the cabin.

One surprise for many will be how quiet the cabin can be when the top is down on the convertible and the windows are up. Normal conversations, even at highway speeds, can be carried this way. This shows a lot of attention to aerodynamics and airflow.

Trunk space is limited, but a carry on will fit in the convertible and a little more than that will go in the back of the coupe. 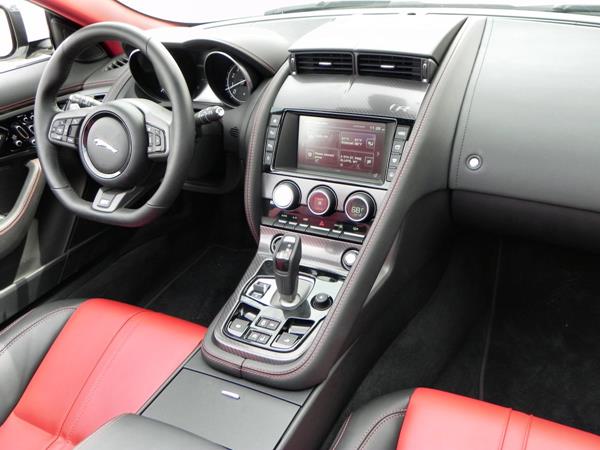 Technology (8/10)
The infotainment in the F-TYPE centers on an 8-inch touchscreen and a 12-speaker meridian sound system, both standard equipment in all F-TYPE models. The simplistic in-car interface for the infotainment that was in place just last year is now gone, replaced with a much more robust and still easy to use graphical user interface for 2016. A smart suite of basic apps will look very familiar to those who've seen previous generations of the app screen, but added to that is a new tech suite called InControl Apps.

InControl couples with a smart phone and adds its brain power to the infotainment system, allowing the phone to launch apps and tie them in with the screen. Apps that do things like find parking spaces, look for local events, add more real-time data to traffic and weather, and more. Although this app suite is far more robust when compared to previous-generation Jaguar systems, it's only just on par with competing ultra-luxury systems on the market.

Although technology is not the best available, it's very good and will make most who use it happy. The interface itself is responsive and fairly quick on its feet.


Fuel Economy (9/10)
The 2016 Jaguar F-TYPE achieves up to 28 miles per gallon on the highway. There are three engine options and two transmission options for the F-TYPE, so economy will vary.

The base engine is a supercharged V6 with a manual or automatic transmission option. Fuel economy is slightly different between the two, but the EPA estimates the same combined economy for both to be 22 mpg. The automatic returns 19 mpg in the city and 28 mpg on the highway.

The V6 has an upgrade option that increases power output, lowering fuel economy as a trade-off. Again, a manual or automatic is available, but all-wheel drive (automatic only) is also added. In rear-wheel drive, this upgraded engine returns 22 mpg combined (19 city, 27 highway) and loses one mpg on each of those with AWD (21/18/26).

The top engine option is a big supercharged V8 available with all-wheel drive and the automatic transmission only. This option has an EPA estimate of 18 mpg combined, 15 in the city and 23 on the highway.

Rear world returns will depend heavily on the driver, as this is a performance car. EPA estimates do not change when opting for the convertible or coupe body style. 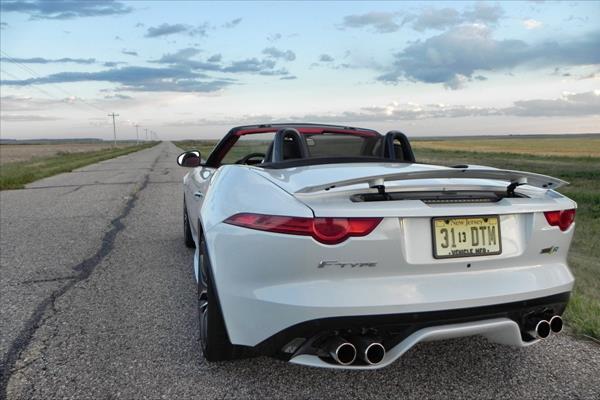 Predicted Reliability, Initial Quality Ratings (8/10)
Thus far, the Jaguar F-TYPE model line has gained a good reputation for reliability. The J.D. Powre and Associates Vehicle Dependability Study ranked it as "Better Than Most" in both 2014 and 2015. 2016 rankings have not yet been released.

There were safety recalls for both the 2014 and 2015 model years. One was for electrical system issues and another for engine cooling.


Safety (8/10)
There is a host of safety equipment, as standard, on the F-TYPE. The 2016 model year has seat-mounted side airbags, for example, on all models. The R model has rear parking sensors as standard (optional on all other trims). Other safety equipment is available at all trim levels as well.

Crash testing has not been conducted on the 2016 Jaguar F-TYPE, as of this writing. Nor was it evaluated last year or in 2014, the year of its introduction. 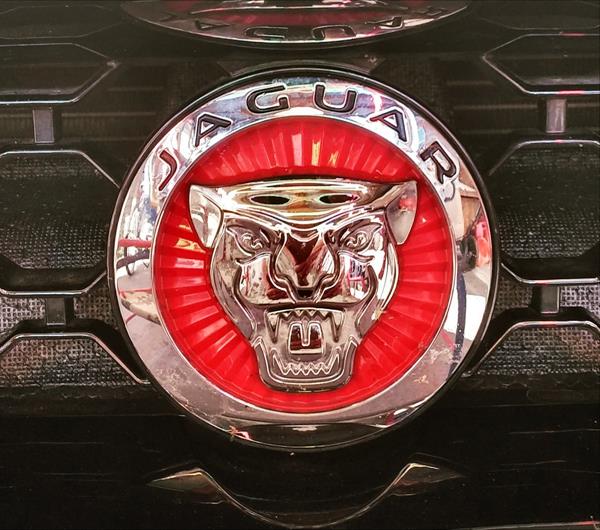 Performance (10/10)
The 2016 F-TYPE is a serious performance machine. One step away from being called a "supercar," this Jaguar is very performance-tuned. The the engine options and handful of powertrain choices make for varying levels of on-road and track-ready excellence in the Jaguar F-TYPE.

The base level vehicle with a manual or automatic transmission is a very good start. The supercharged V6 here displaces 3.0 liters and outputs 340 horsepower and 332 pound-feet of torque. The six-speed manual transmission has a solid shift pattern and is made for quick movements from gear to gear. The automatic is an eight-speed with very fast shift reactions and paddle shifting on the steering column as standard. Jaguar gives these transmission options with this engine 0-60 mph times of 5.5 seconds and 5.1 seconds respectively.

The F-TYPE S increases the V6's power output to 380 hp and 339 lb-ft. 0-60 times in this version vary according to transmission and powertrain choice. The rear-wheel drive manual transmission returns 5.3 second times, the RWD with automatic gets 4.8 seconds, and the automatic with all-wheel drive offers 4.7-second 0-60s.

Finally, the top of the line F-TYPE R model has a supercharged 5.0-liter V8 that outputs 550 horses and 502 lb-ft of torque. All-wheel drive and the eight-speed automatic are mandatory with this model. Rated 0-60 mph time is 3.9 seconds. Our 2016 Jaguar F-TYPE R Convertible returned a 4.4-second best 0-60 and averaged 4.7-ish on most runs.

Sport tuning to the chassis is essential and the Jaguar F-TYPE, being a relatively lightweight car with a very low, wide stance, is made for cornering. It does so with British finesse, doing curves at speeds most other sports cars, including the Chevrolet Corvette or BMW i8, would feel nervous about.

In everyday driving, though, this Jag also shows its excellence in how balanced and well-mannered it is. The F-TYPE is equally at home burning up the track or driving sedately down a winding path to the country club.


Pricing and Value (9/10)
Value for the price paid is extremely subjective when you get into the luxury sports car genre. The 2016 Jaguar F-TYPE ranges in price point from the high end of luxury sport models to almost double that at its top most R when loaded with options. In all cases, though, the value received for the price paid is likely to be considered very good if the buyer is purchasing a car such as this.

The Jaguar is in a very limited field of high-quality sports cars that aim to deliver extremely well-crafted luxury along with finely engineered sport performance. From the base supercharged V6 to the rumbling power of the big V8 R, the F-TYPE delivers excellence across the board. 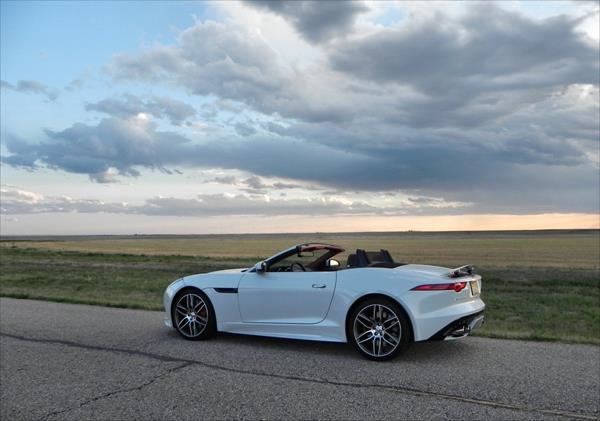 Total Score and Competitive Comparison (72/80, 90%)
Comparisons with the Jaguar F-TYPE are difficult to make. The F-TYPE is very British and only another make from the island could really compete, and yet neither Bentley nor Aston Martin have managed to make a serious mark in the U.S. with their sports coupes or convertibles. The nearest competition to the F-TYPE is the much less expensive Chevrolet Corvette. That American beauty has the same general style and appeal that the Jaguar does, but has nothing close to the interior or all-wheel drive performance of the R model. So apples-to-apples is just not realistic.

The 2016 Jaguar F-TYPE, especially in its R package, stands alone as a very British, very well-done sports car. It successfully combines cutting edge modern engineering with old world appeal and style in a way that perhaps no other automaker could do with success. The F-TYPE is a beautiful car, through and through, and is, in our minds, unmatched on the market today.