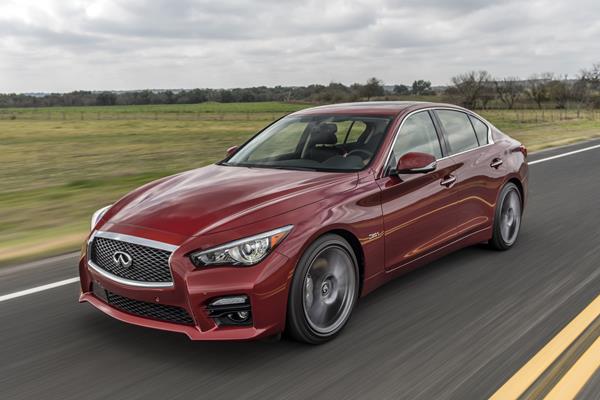 The 2016 Infiniti Q50 has been refreshed for the new model year, adding three new engines, better chassis tuning, and more. The Q50 is a five-passenger midsize luxury sedan available in six trim levels, each denoting the engine choice. New this year is a turbocharged four-cylinder option, an updated V6, and a Red Sport 400 model made specifically for sports driving enthusiasts.

The 2016 Q50 is a well-rounded sedan with eye-catching styling, a beautiful interior, and a value proposition that bests most in the segment. We drove the 2.0T with the new four-cylinder engine and were impressed by its peppy output and excellent demeanor. This is a truly everyday car that offers engaging performance and good ergonomics. 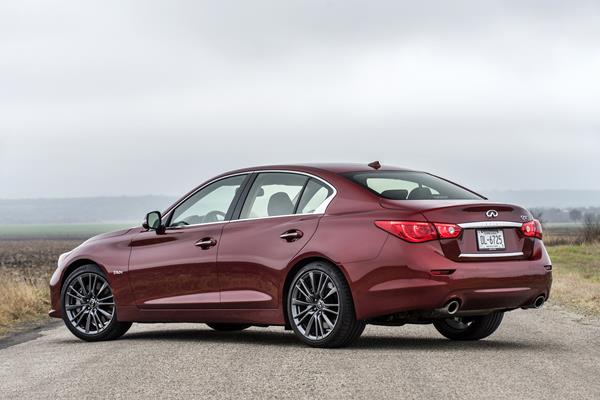 There is a lot to like about the Q50's look. It's both bold and classy with a touch of European saloon about it. The front grille is curved and accented with a mesh grille. The scoop below is thin and wide, giving visual dominance to the lower scoops and foglamp bezels. Long, peering hawk-like headlamps run into the fenders inside humps created by the front fascia and hood lines. The hood itself is long, in the saloon style, ending in a heavily tapered windscreen.

Along the sides of the 2016 Q50, deep dimples in the doors create the beltline crease above the handles and a rounded look to the bodywork. The roofline curves sharply around and down to make for a fastback style with a Euro curve at the rear pillar. Large wheels are accented with thin-walled tires tightly ensconced in the fenders for a sporty push.

It's a great look overall that competes well with segment favorites from BMW and Mercedes and that really stands out against the bolder new designs from Lexus. From any angle, the 2016 Infiniti Q50 is a sharp-looking sedan. 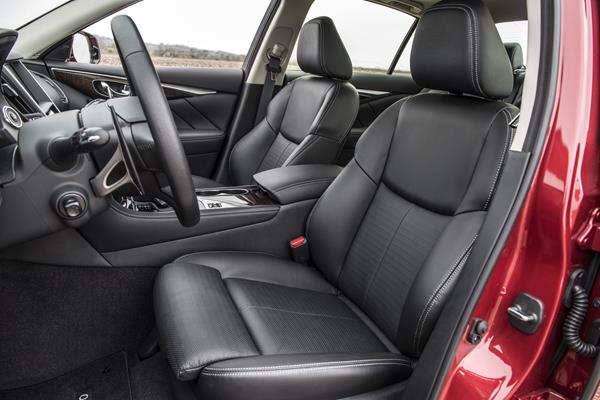 There is a lot to appreciate inside the Q50, which sports one of the best overall interiors in the class. With a few caveats, the interior experience in the 2016 Q50 is excellent given the car's relatively low price point compared to competing entry-level luxury sedans. Seating is excellent, but the infotainment screens are misplaced and have a steeper learning curve than we'd like. The overall interior is very favorable, though.

The Infiniti Q50 has a high materials quality making up its interior experience, a first step towards excellence. It's visually appealing as well, creating an open atmosphere with a lot more light and headroom than the fast-moving roofline might indicate. The standard seating is good for most with plenty of bolster and accommodation, but the upgraded sport seating is likely some of the best in the class, with a perfect mix of firm support and soft compliance. Especially in the hips and thighs.

We aren't fans of the way the dual screen infotainment is laid out. Much of this concern is due to placement, not function. The top screen has an anti-glare filter that works well, but that screen is mostly for navigation and thus doesn't get used the majority of the time. The lower screen has no filter and is not inset enough to stop glare from happening when the sun is not directly above or just behind the car. That makes it difficult to use on the move.

The back seats are well done, however, with the Q50 offering enough space for adults to sit comfortably. The trunk is also of a good size at 13.5 cubic feet.

Twin touchscreen displays are standard equipment on the 2016 Infiniti Q50. These are an excellent idea, but a bit hit-and-miss with their application. Aside from the aforementioned glare issues, the screens do not work intuitively together and the user has no control over what items are shown in which screen. The top screen is primarily for navigation (if that is optioned) and the lower screen for everything else. We'd like to be able to swap the screens' information (flip-flop) and be able to have certain items or apps appear on one screen rather than the other. We do note that the dual-screen setup is new for Infiniti, so we expect improvements will come with time.

Outside of this dual-screen woe, though, the infotainment in the Q50 is relatively easy to use. Control is mostly through touch, but we like the simplified menu layout and the fast responses the system gives. Most basic functionality is included in the base packaging for the Q50, making the base model well-equipped for the price. 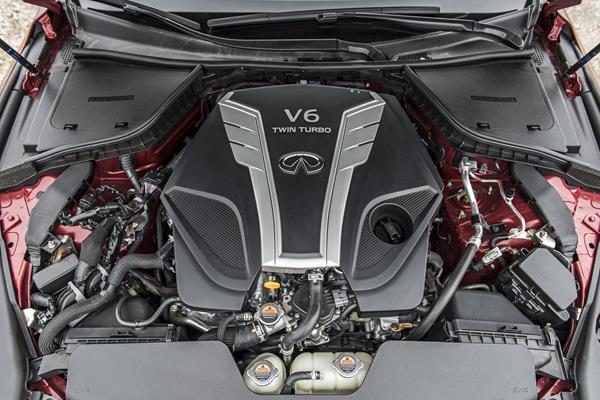 Fuel economy is not necessarily the 2016 Infiniti Q50's strong suite, though the luxury class rarely emphasizes MPG achievements. All models are paired to an automatic transmission and both front-wheel and all-wheel  drive are available in most.

In the real world, our four-cylinder, rear-wheel drive car averaged 26 mpg after over 300 miles of driving in a varied mix of situations. We consider that phenomenal, as meeting EPA expectations in the real world is rare. We also expect that the (as yet unrated) AWD models will have slightly lower economy numbers than those posted here.

Because the Q50 is relatively new in terms of powertrains, reliability data is hard to come by. J.D. Power and Associates rates the 2016 Q50 as "About Average" for the segment and the only recall issued for the car so far was given last year for airbags. 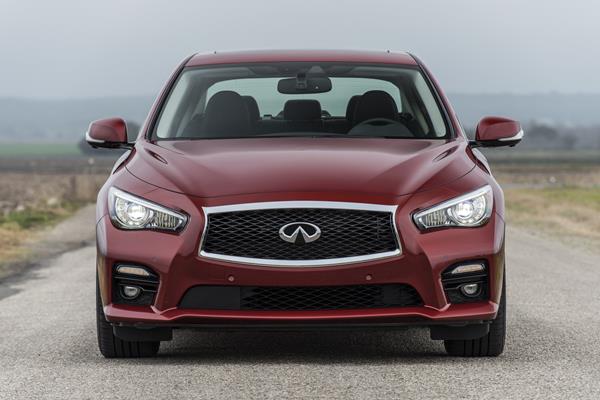 The 2016 Infiniti Q50 has not yet been crash tested by the National Highway Traffic Safety Administration or the Insurance Institute for Highway Safety. The 2015 model, however, received top scores from both institutions with a Top Safety Pick+ rating from the IHS and a 5-Star overall rating from the NHTSA.

The 2016 Q50 has a host of included safety equipment and every advanced safety option available on today's market. A rearview camera and Infiniti's Connection telematics system are both standard equipment while lane keeping assist, adaptive cruise control, and crash mitigation are available in upfit packages for the car.

The 2016 Q50 has six powertrain choices, including three engines. All three engine options are paired to a seven-speed automatic transmission, tuned specifically to the engine. Rear-wheel drive is standard and all-wheel drive is optional.

The base engine is a 2.0-liter turbocharged four-cylinder that outputs 208 horsepower and 258 pound-feet of torque. Q50s with this engine are labeled 2.0T in their model designation. A 3.0-liter V6 is offered in the 3.0T models, giving 300 hp and 295 lb-ft. An upgraded version of this engine powers the special Q50 Red Sport 400, tuned to churn out 400 horsepower and 350 lb-ft of torque.

Our test drive was in the 2016 Infiniti Q50 2.0T with RWD. We found this base four-cylinder to be very peppy and well-tuned for the car. The transmission shifts quickly and seamlessly, offering a good everyday drive. Acceleration is not as powerful as in the V6-powered models, of course, but the torque delivery comes faster thanks to the turbocharging, making the 2.0T feel quicker than it really is.

On the road, the Q50 is a balanced, well-tuned drive. It feels good on the highway, freeway, and open road. It's sporty for the class and definitely emphasizes that, but the luxury appointments and relatively quiet interior are surprises given the sport emphasis. The chassis is a bit rougher than some luxury drivers might want, given its tuning, but most will find it fun and engaging. Around town, the Q50 drives well and is very maneuverable. In all, a well-done luxury sports sedan. 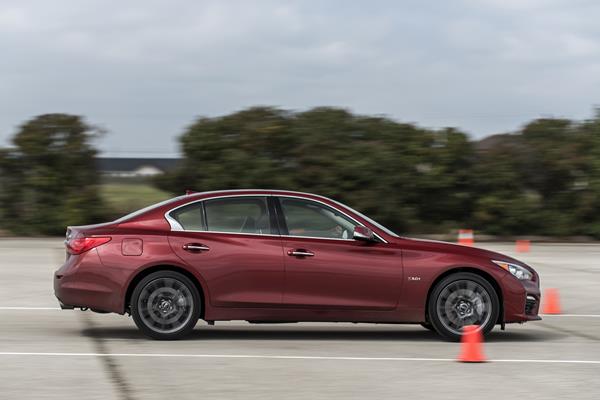 The entry-level luxury midsize sedan segment has a lot of competition, but few among them can offer the kind of accoutrements and luxury that the Q50 does for its phenomenal price point. Our 2016 Infiniti Q50 2.0T Premium model was nearly fully-loaded and priced at just $40,700, delivered. That's phenomenally good compared to a Lexus or BMW with the same equipment.

We do note that the luxury segments are, on the whole, not known for their resale values and the Q50 doesn't change that. It does, however, offer a lot of bang for fewer bucks by comparison to others that may have higher resale down the line.

The 2016 Infiniti Q50 competes with a lot of great choices offered in the midsize luxurys sedan segment. The excellent BMW 3 Series has long been a favorite and offers more engine options than does the Q50, but not the same value. The Mercedes-Benz C-Class is another solid choice, but is not as good at the everyday nor as value-oriented as is the Infiniti. The Cadillac ATS is sportier and has the powerful -V option for the true sports car fanatic, to go with its cabin that can only be described as "purely American" in its opulent excellence. The closest competition for the Infiniti Q50 might be the Lexus ES, which is more expensive and, frankly, less sophisticated than the Q50, but whose Hybrid model is head-and-shoulders over the Q50 Hybrid.

In all, the 2016 Infiniti Q50 is an excellent option in the midsize luxury segment. For those looking for a good everyday driver that is both engaging and ergonomic, the Q50 fits the bill. With real-world fuel economy that is better than many and a value proposition that beats just about everyone, the Q50 is definitely worth shopping.