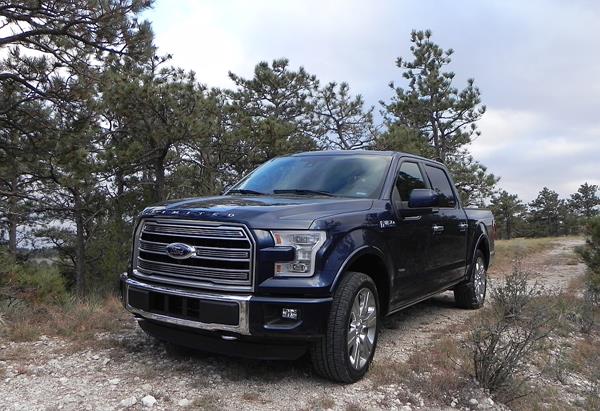 When it comes to the F-150, Ford doesn't sit around waiting for the competition to catch up. There is a reason that this is the best-selling pickup truck and one of the best-selling cars in the United States. For 2016, Ford has added an updated infotainment system, the Pro Trailer Backup Assist feature and a new top-level Limited trim.

We spent a week in the Limited trim and found that it's verging well into the territory of luxury automobiles, normally reserved for brands with European accents. Driving other models shows that the diversity of powertrain and trim/package options means that there's likely a 2016 F-150 for just about everyone.

There's a lot of consider with the 2016 Ford F-150 and a lot of compelling reasons to think of it as a top choice. There are some downsides as well, and the competition in the lucrative full-sized pickup truck market is fierce. 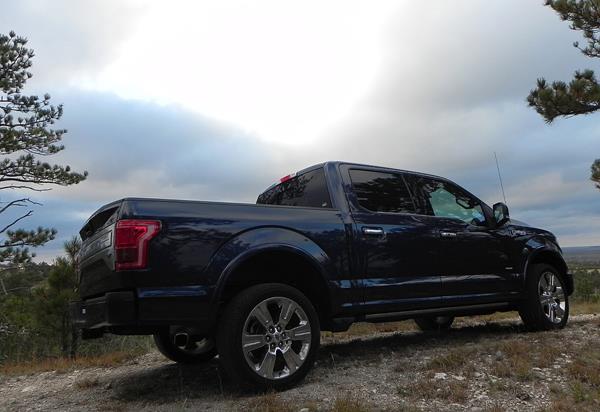 The Ford F-150 is probably the most refined looking of today's full-sized pickup trucks. It has a beefy, powerful look like any pickup truck, but tempers that with some smoothing that gives the F-150 an overall appearance that is more in line with a smooth crossover than a bulky truck. This gives the F-150 a slightly broader appeal than most other full-sized pickups might have. Given the broad base of buyers for the F-Series

- literally the best-selling vehicles in America

A broad grille is smoothed by rounded corners at top and a less aggressive grille with wide slats. The headlamps are angular in an exaggerated "C" shape to either side, which minimizes their large size to further subdue the large face of the 2016 F-150. Low hood lines and multi-tiered fenders complete the look from the front end. The large, strong bumper, which is a must on any pickup truck, underlines everything.

Along the sides, the high ride height is visually diminished by the low-profile tires and strong wheels included in most F-150 packages. Simple body lines remind us that this is the only all-aluminum-bodied pickup on the market. Squared windows for the greenhouse and straight body lines also add to this impression, but the general profile of the 2016 Ford F-150 is less aggressive about its truck-iness than are competitors such as Ram or General Motors.

All of this speaks well for the Ford's overall look, with the 2016 F-150 becoming a much less testosterone-fueled pickup than others on the market. There's enough beef to make sure you know it's capable, but not so much as to become pro-wrestler ridiculous. 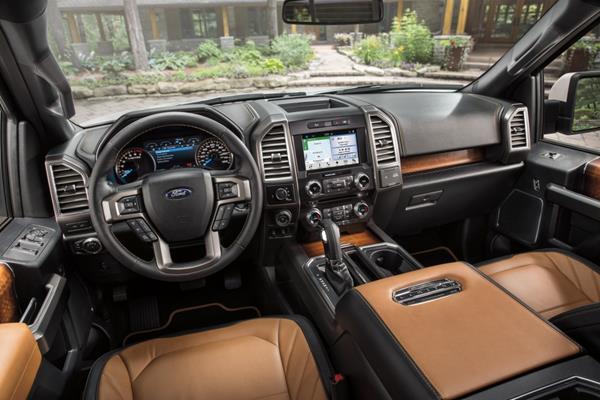 What you get with the Ford F-150's interior will depend a lot on which package you purchase. These range from the very down-to-earth XL trim, which has little in the way of modern comforts, all the way up to the King Ranch and Limited trims, which venture into true luxury vehicle territory.

At its most basic, the F-150's cabin layout is intelligent and well-considered. Seating is roomy and nicely bolstered, though upper trims enjoy far more cushion than that found in the base level. The instrument cluster is exceptionally well done, sitting just about right to avoid glare without requiring deep bezels or a harsh cant. Buttons on the steering wheel are laid out in such a way and large enough so that even those wearing work gloves can use most of them without trouble. Same with knobs and buttons for climate and other must-haves on the central dash.

The infotainment display, which comes with mid- and upper-trims, is well-placed for both driver and front passenger use. We also like the very large storage bin between the driver and passenger and the large, solid-feeling shift lever ahead of it.

2016 F-150 models with a King or SuperCrew cab have back seats that are some of the more accommodating in the full-sized pickup realm. Most crew cab pickup trucks on today's market have more interior space than a large sedan, but the F-150 also has seat comfort that isn't as easily matched by some of the competition.

Beefs with the F-150's interior come when parents install child safety seats, which can be a bit tricky if you have a top lanyard on a front-facing seat without the LATCH system. There is also a lack of rear seat adjustment compared with some competitors. But the driver may not care about this if the optional massage units for the two front seats is opted for.

With one of the better infotainment systems on the market, the F-150's Sync 3 (new for 2016) is a real bonus. An 8-inch touchscreen is standard in the Luxury package for the XLT and in trim levels from Lariat on up. There is also a very useful 9-inch driver information screen at the center of the instrument cluster that is standard in the Lariat trim and above. 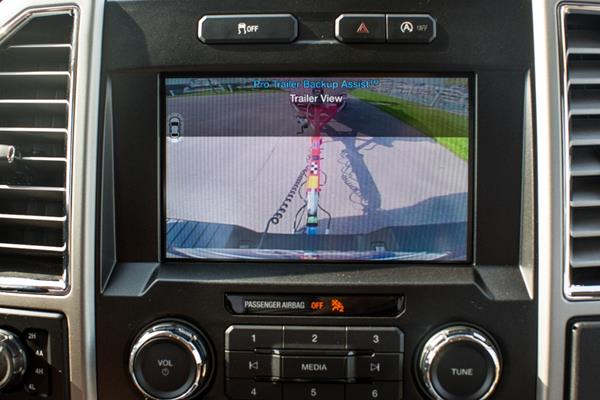 Sync 3, the latest in Ford's infotainment interfaces, is far superior to the MyFord Touch it replaces. Pinch-and-swipe gestures akin to a tablet, fast-button menu selections across the bottom of the screen, and a permanent home button at the top all make it fast to jump from one thing to another. Especially for common items like phone and audio controls. App integration from a smartphone is also well done and may be the best in the business amongst trucks on the market.

The driver information display at the cluster is also very useful. This allows many things to be displayed at the drivers' whim and is controlled via buttons on the steering wheel. Most useful beyond the usual trip counting and fuel economy estimates are the trailering/towing, drivetrain information and alerts that are found there. Having navigation and smartphone alerts available on the screen directly below your line of sight for the road is invaluable on long trips.

In all, the technology interfaces and setups in the 2016 F-150 are all excellent for the market.

With the exception of some diesel options on the market, the 2016 Ford F-150 boasts some of the best available fuel economy numbers in the full-sized pickup truck segment. The base V6 offers 20 mpg combined, with 18 mpg in the city and 25 mpg on the highway in rear-wheel drive. Those numbers drop to 19 mpg combined (17/23) for the 4-wheel drive option.

- both factory warrantied options from Ford. 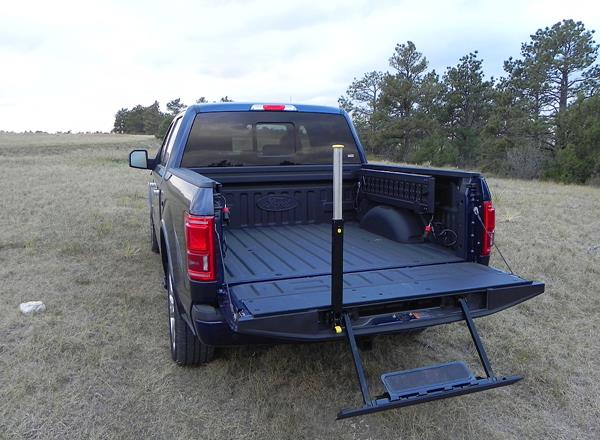 The 2016 F-150 is rated as slightly Better Than Most by the J.D. Power and Associates Vehicle Dependability Study. This is good considering that it's by far the best-selling truck in the segment and one of the best selling vehicles of any kind in the U.S. Tempering that are rumors that the 3.6L EcoBoost engine can degrade when used for heavy towing and reports of expensive bodywork repairs when the aluminum body is dinged or smacked.

Although these rumors are so far not as easily quantified as are dependability studies, they are persistent enough to be mentioned. There have been no safety recalls for the 2016 Ford F-150 and the warranty for the truck is about average for the segment.

The 2016 Ford F-150 is the only full-sized pickup truck currently on the Insurance Institute for Highway Safety's Top Safety Pick list for this model year. In addition, it received high marks from the National Highway Traffic Safety Administration. Somewhat unusual safety features such as standard full-length side curtain airbags and automatic crash notification (via a paired cell phone) bolster these safety ratings.

The XLT trims and above have standard MyKey, a setup that allows owners to pre-program keys for different users so that limitations for valets, teenagers, etc. can be set. Safety technology such as around-view (360-degree) cameras, parking sensors, etc. are also optional or standard for the F-150, depending on trim choice.

The 2016 F-150 is available in so many powertrain configurations that anyone looking for speed, muscle or economy can find something to fit their needs. There are four engines available in the F-150, all mated to a 6-speed automatic transmission tuned for the engine's particular capabilities.

Those who wish for better fuel economy and sporty driving will like the 2.7-liter EcoBoost, a turbocharged V6 that outputs 325 horsepower and 375 pound-feet of torque. 0-60 mph runs in about six seconds are doable with this engine, thanks to the Ford's lightweight aluminum body. Towing is rated at about 8,500 pounds maximum, depending on cab configuration.

The base level 3.5-liter V6 outputs 282 hp and 253 lb-ft, which is respectable for the segment. Towing is rated at 7,600, but don't expect to win any checkered flags with this engine. It's a solid goer, but not fast-paced.

The 3.5-liter turbocharged V6 EcoBoost engine option outputs a beautiful 365 horses and 420 pound-feet, making it the engine of choice for most people in the F-150. This is the quickest of the engine options for the 2016 F-150 and has the most powerful towing capacity of the lineup at 12,200 pounds in some configurations. The engine is capable, but not really meant to do that kind of work everyday.

Top of the towing ranks is the 5.0-liter V8, which outputs 385 horses and 387 pound-feet in a relatively long powerband. Speed is still good compared to other naturally aspirated V8s on the market, but not phenomenal. Towing is rated at 11,000 pounds thanks to that more powerful stroke from those eight cylinders. Top-line towing is from the V6, but daily towing will be better served with this bigger eight.

When considered objectively, most pickup trucks in the full-sized segment are priced at about the same level when compared apples-to-apples for what's included in the package. The Ford has the advantage of having more powertrain options and generally better fuel economy than most gasoline-powered competitors. Resale values tend to cancel this out, with the Ford having a lower value retention over time than do many other trucks.

Knowing that, we can point out that the Ford F-150 has a lot of packages and trims to choose from, each of which fits a segment of the overall market. The Ford F-150's appeal is broad, with a diverse group of buyers making up its sales totals. This makes the F-150 a bit more value-oriented than others in terms of purchase reasons. The F-150 ranges from replacing a family sedan to being a serious workhorse, depending on packaging, and Ford has done a good job of marketing that range. 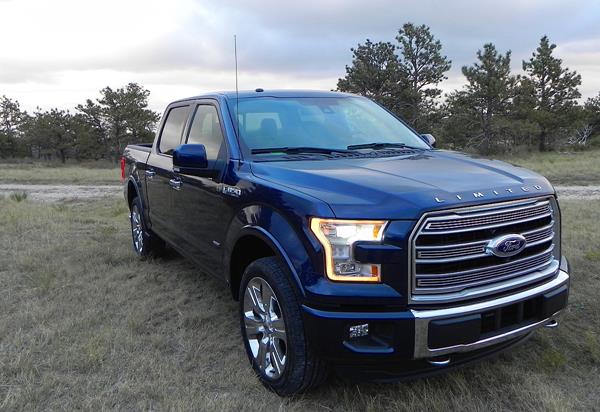 The 2016 Ford F-150 has no lack of competition in today's full-sized pickup truck market. Many great trucks make up this segment, including the smooth-running Ram 1500 and the solid Chevrolet Silverado 1500. Reliability and durability are hallmarks of the Toyota Tundra. Then upscale F-150s will see competition from the GMC Sierra 1500 as well. Against these, the Ford does well, but all are well worth considering if a specific truck need is compelling one to purchase. Although the half-ton Nissan Titan lags behind in many ways, the new Titan XD models are also worth noting if towing is your primary concern.

The 2016 Ford F-150 definitely beats the competition in terms of its range of configuration. As we've mentioned: three cab styles, three bed lengths and four engine options ride, alongside a multitude of trim and package options. From the most basic of work trucks to the most luxurious of rides, the F-150 has it covered. Our week in the Limited model showed us that even well-known European luxury sedans may find some competition from this Michigan-made pickup.