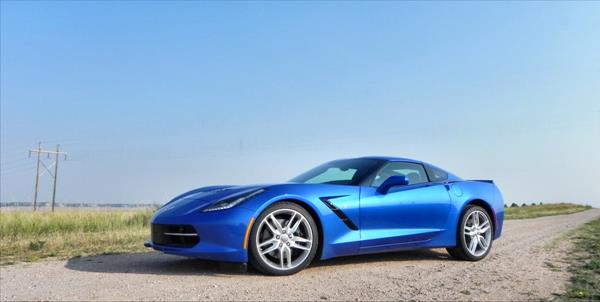 Overview (Final Score: B+)
The 2016 Chevrolet Corvette is the second model year for the seventh generation of this iconic American sports car. The Corvette has a beautifully compelling mixture of sexiness, muscularity, and finesse that few others can boast. Perhaps most striking for ‘Vette fans, though, is the upscale, refined interior and excellent driver's cockpit.

A beautifully resonant 6.2-liter V8 and quad piping underscore the car. Added this year is a flat-bottomed sport steering wheel, a power-closing trunk (to help avoid slamming), and Apple CarPlay / Android Auto as standard for the infotainment system.


What We Loved About the 2016 Chevrolet Corvette


What We Didn't Love About the 2016 Chevrolet Corvette 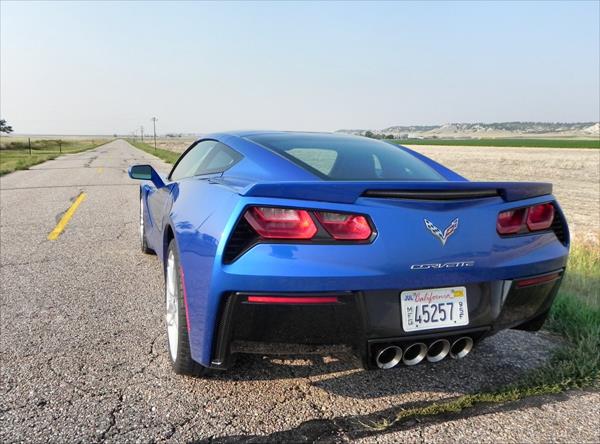 Exterior View (10/10 relative to market)
The 2016 Chevrolet Corvette is one of the best looking vehicles in any class. It's a combination of sleek, modern styling and throwback nostalgia in a beautiful package. The heavy shoulders, hourglass figure, and wide-hipped rear end are still there, as they've been for most iterations of the ‘Vette, but are met with beautiful headlight angles, a smart race-style roofline, and big rims to match the wide wheel wells and tight modern tires.

The look of the new 2016 Corvette begins with the narrow, low front end which gives the appearance of having little air intake for the engine and a lot of aerodynamics as a result. The reality is that air is carefully routed through the narrow grille and from underneath the fascia in order to cool the big beast under the hood while the low, wide, chiseled look of the fascia and hood make for great aero styling.

Tall, hunched shoulders are created by the rounded fenders that come up from the low hood on either side, allowing space for the tires and suspension underneath. These proceed to the windshield pillar, then dip down provocatively along the beltline to rise back up towards the rear of the long door to the tall, heavy rear fenders. The now-signature reverse-7 cut behind the front fender and the fastback roofline finish the side above the machete-style lower door detail.

At the rear, the Corvette has a heavy haunch with powerful hips thanks to this big rear fenders. The rear clips off after the fastback, creating a dynamic look that reminds us of the third-generation Corvettes of the 1970s. With the top removed, the coupe becomes a beautiful roadster-style drive and with its top down, the convertible becomes a great-looking open top drive.

Everything about the 2016 Corvette's look is both sensual and powerful, promising speed with a caress of style. 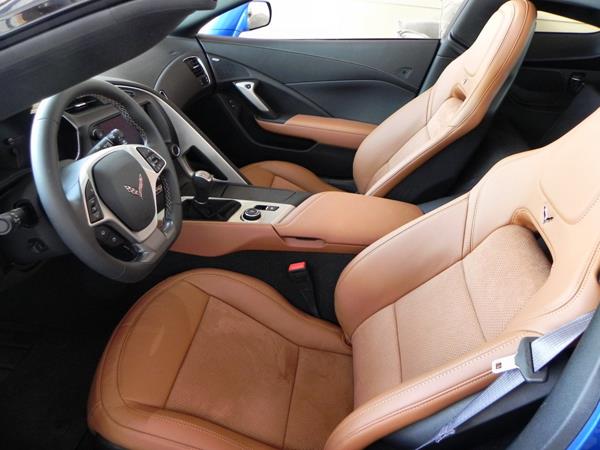 Interior Comfort, Quality, Ergonomics (8/10)
The 2016 Corvette has a much more upscale cabin than past renditions of the car have sported. A driver-centric experience centers the cockpit layout with driving controls being carefully positioned for optimum effect. The center stack cants towards the driver and the dashboard flows into the door panels and seating in a nice wrap that creates a seamless experience.

Seating is very well done for a two-seat sports car with upper trims offering a lot of adjustment options and lower trims having well-placed seating positions. The available sport seats are an excellent choice for those of average height who plan to do a lot of performance driving, but taller folks will prefer the more upscale seating options with lateral bolster adjustment instead.

The cargo space is small, but that's to be expected of a sports car of this caliber. The coupe has a larger area beneath its hatch with just enough space for a golf bag or a few grocery bags. The convertible has very little space, but a big bag of dog food or a few bags of groceries are still doable.

Storage throughout the cabin is tight, but more plentiful than might be expected. The drink holders are small, but the secret cubby behind the infotainment screen (with integrated USB and felt lining) is a great place to stash valuables.

The overall cabin design is one of the best in the market, rivaling even some of those with much larger price tags than the Corvette might have. We also note that in some performance-oriented trims, some of the interior refinement is removed in favor of lighter weight options. 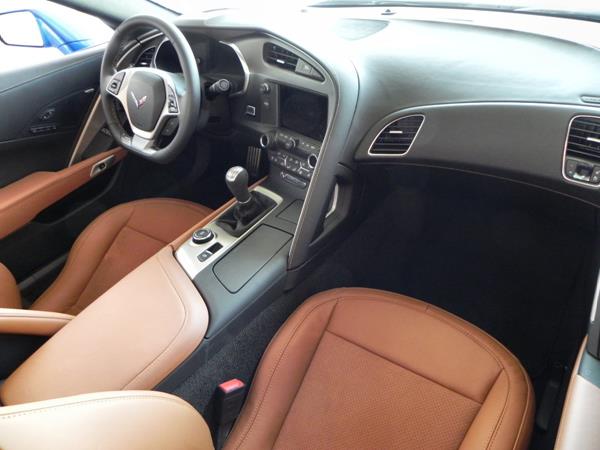 Technology (9/10)
Tech in the 2016 Chevrolet Corvette centers around the 8-inch touchscreen with MyLink, which is standard equipment. The addition of Apple CarPlay and Android Auto for 2016 means that it's even more useful than it was before. The optional Performance Data Recorder (PDR) system is one of the greatest apps you'll find in a performance vehicle. Our only concern with the MyLink system is that it occasionally has to stop and think for a moment, which can be annoying.

As it is, though, the infotainment in the Corvette is easy to use once the short learning curve is surmounted. We like the clean, crisp display and large buttons for menu selections. Users do have to make sure to definitively press to get a selection, though.

Another point of interest is the heads up display, which General Motors has been perfecting in many of its performance vehicles. The display shows at the bottom of the windscreen for the driver and is adjusted by a trio of switches located to the left of the steering column on the dash. A wealth of information can be placed on that little screen, including digital readouts of various gauges and metrics for the car. It also adjusts up or down to accommodate different driver heights for easier reading. The display is clear and easy to read in all but the harshest of lighting. 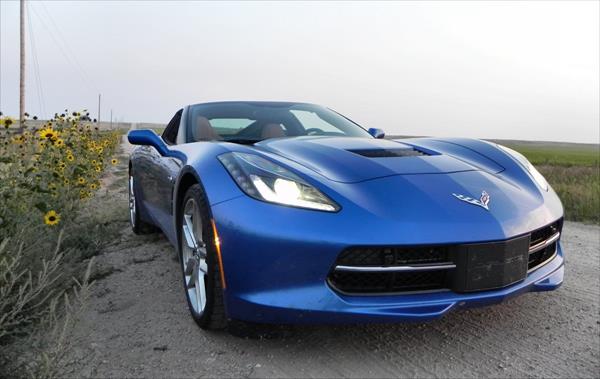 Fuel Economy (10/10)
Here is where a real surprise awaits Corvette drivers. Despite its beefy V8 engine options and fast-paced build and performance orientation, the 2016 Corvette offers excellent fuel economy as well. This is due to a combination of the car's very light weight, the extra gearing in the transmission, and some smart engine metrics.

In the real world, we easily achieved 27 mpg on the highway despite not working very hard towards fuel efficient driving. Averaging better than 20 mpg with either the automatic or manual transmission is not a difficult task if continual performance driving is not your focus.


Predicted Reliability, Initial Quality Ratings (8/10)
Reliability information for the 2016 model year is difficult to come by, but the largely identical 2015 model year has several sources to draw from. J.D. Power and Associates gave the 2015 Corvette a rating of "Better Than Most" (3.5 out of 5). This is a good rating for a sports car. Recalls for the 2015 model year included a suspension, an air bag, and a parking brake recall, all conducted in 2014 or early 2015. There have been no recalls for the 2016 model year, leading us to believe that the kinks have been worked out. 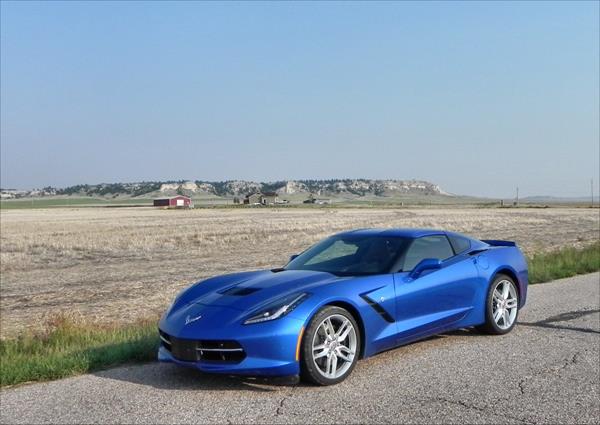 Safety (7/10)
The 2016 Corvette has a host of included safety features as standard. These include GM's OnStar, which has automatic crash notification, on-demand roadside assistance, and more. A rearview camera is also standard equipment.

Crash testing has not been conducted on the 2016 Corvette, nor was it published for the 2015 model year. This is the biggest knock given on our safety assessment. We believe that the Corvette would do well in most crash tests, but have no way to verify that via either the National Highway Traffic Safety Administration or the Insurance Institute for Highway Safety.


Performance (10/10)
The 2016 Chevrolet Corvette is offered in three performance grades with two engine options and two transmission choices. In any configuration, the Corvette can likely equal most competing vehicles in its class or above.

The base model Corvette is the Stingray with a 6.2-liter V8 engine that powers the rear wheels with 455 horsepower and 460 pound-feet of torque. This engine runs through either a seven-speed manual transmission (standard) or an eight-speed automatic transmission. Both transmissions have launch control and driver-selectable driving modes that change steering, throttle response, and other metrics for various conditions. 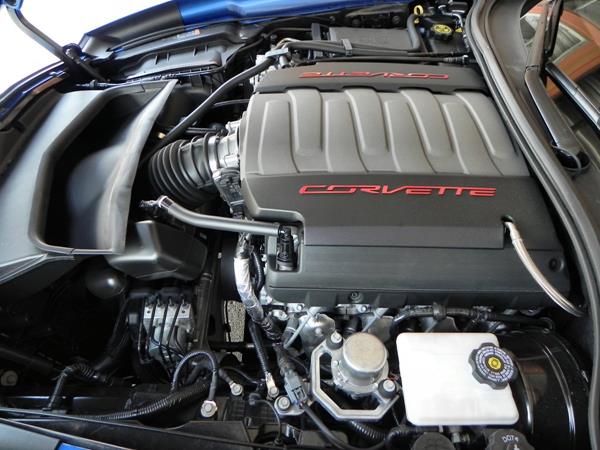 The standard 6.2-liter V8 can be upgraded with a performance exhaust system which raises output to 460 hp. With this exhaust upgrade plus a competent driver, the Stingray is capable of 4-second 0-60 mph times with either transmission. We achieved excellent times in both a 2016 Corvette Coupe model and a 2015 convertible model with the same engine, the former with a standard transmission and the latter with an automatic.

The performance model for the 2016 Chevrolet Corvette is the Z06 edition. This sports a 6.2-liter supercharged V8 that outputs a phenomenal 650 horsepower and 650 pound-feet of torque. The manual or automatic transmission remain the same. 0-60 times of 3.5 seconds are doable with this engine and performance packaging.

With all of that speed and power, though, comes some responsibility. Luckily, it's not paid for with a lack of cornering ability. The 2016 Corvette is quite agile and very easy to handle in spirited driving around bends, corners, and hard turns. Especially with the optional adaptive suspension dampers installed, which we highly recommend.

In our performance tests, the Corvette easily made consistent 90-degree, two-lane turns (aka a "15 mph turn") at 74 mph without skittering the tires or requiring a performance slide to hold speed. For comparison, a Mustang GT was about 10 mph slower on the same curve and a Jaguar F-TYPE with all-wheel drive was just 3 mph faster.


Pricing and Value (9/10)
The 2016 Chevrolet Corvette has a base price of around $55,500 and comes relatively well-equipped for those dollars. From there, it can become expensive, with our test models both ringing in around $70,000 for either the coupe or convertible. The refinement and performance offered for that price, however, is excellent and competitive with some vehicles that cost much more than that.

The Corvette being a two-seat sports car with rear-wheel drive as the only option does have a somewhat limited audience due to its inherent lack of versatility. This is not likely to be of concern to those considering buying one, though, and the spacious cargo area (relatively speaking) in the coupe is a bit of a boon there.

For the price paid, performance offered, and refinement given with the 2016 Corvette, we believe it's a solid value for the sports car buyer. 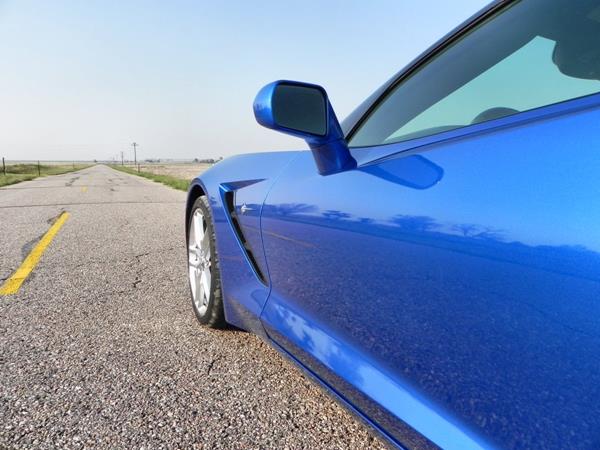 Total Score and Competitive Comparison (71/80, 89%)
The 2016 Chevrolet Corvette is a beautiful car inside and out. It's refinement and driving feel are excellent and as good or better than nearly any sports coupe or convertible you'd care to name. As a daily driver, it's a confident, well-mannered machine with a lot of comfort and a lovely highway glide. As a weekend fun machine, it's spirited and muscular.

There aren't many direct competitors to the Corvette anymore. The traditional pony cars often considered competitive to it, the Ford Mustang and the Dodge Challenger, are now very different sports vehicles in their own right. Neither is as expensive or as good in the corners as the ‘Vette and both offer very different dynamics and focus, appealing to a different type of buyer than does the Corvette. The Porsche 911 is a solid contender with a serious driver focus, but will also be more expensive both off the lot and at the pump.

As it is, the 2016 Chevrolet Corvette stands on its own as a category unto itself. It has equal parts sex appeal, raw power, and driving refinement to make it a surprisingly excellent package. Gone are the ‘Vettes of old with their shabby interiors and questionable handling characteristics and in is a new, revitalized Corvette that doesn't forget its roots as a driver's car.