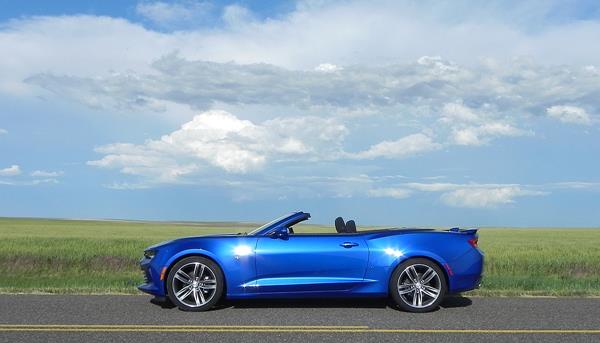 In all, there is much to love about this new-generation Camaro. It deserves the "A" rating we're giving it. This four-seat, two-door muscle car is still the rear-wheel-drive beast that appeared in the 1960s, but has become a much more sophisticated coupe with time. Today's Camaro is fast, fun, and powerful, but is also fuel-sipping and comfortable. It's a great mix of sports, muscle, and daily use.


What We Loved About the 2016 Chevrolet Camaro


What We Didn't Love About the 2016 Chevrolet Camaro 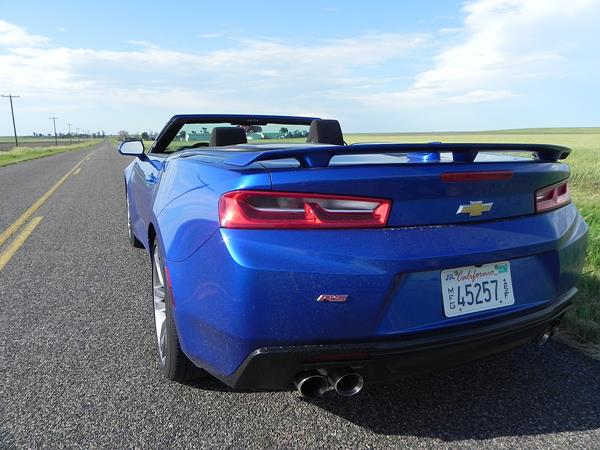 The 2016 Camaro has been fully redesigned for the new model year, but retains many of the looks of its predecessors in this modern era. The new look is more muscular and has a heavier appearance than was there before. The 2016 Chevrolet Camaro is aiming for a more powerful presence and does a very good job of creating one.

A sharp nose, signature to the Camaro, is faced with a thin grille and very thin headlamps. Below that is an air scoop and accentuated lower scoop along with thin vertical fog lamps. The front fenders are strong, but not bulging, with the rounded hood hinting at a large powerplant beneath.

The Camaro, being a coupe, had a fast-paced windscreen and roofline. The body panels beneath continue this with quickly-moving lines towards the massive haunches behind. This being a rear-wheel drive sports car, power in both visual and real form is focused on those rear fenders and tires. The rear pillar, tapered rear glass, and fast-dropping roof all work to build on those huge haunches to give the Camaro a decidedly "jumping forward" look.

Finally, sportiness is hinted through the small gap between tires and wells, the car's short stature, and the overall low and wide build of the 2016 Camaro.

The new Camaro is much more upscale and well-defined than was the previous generation. Some of that trickles down from the Corvette, but outside of a few details, most of the 2016 Camaro's interior is unique to the car. And that's a good thing, as one thing the new Camaro needed was to bring itself up to par with the competition in terms of interior comfort and ergonomics. Chevy has done that and more here.

Seating is well bolstered and smartly done, no matter the package options. Our test model had cloth seating and we were glad for it, given a convertible's propensity for absorbing heat. Yet sitting in a higher-end model with leather won't deny you the same comforts.

What's most striking in the new Camaro, however, is the great dashboard design with details like the rounded vents and updated steering wheel. The dash has been lifted a bit and pushed back, giving a bit more room in terms of knees and overall cabin feel. The concave design of the dash is very modern and unusual, setting this Camaro apart from the competition. The smart placement of the infotainment screen, excellent bezels around the instruments, and unique vent controls for the climate are all great additions to the new Camaro.

Above all, small things like the placement of the arm rest and the shift knob, the widening of the well just around the clutch, and edge-less rearview are great touches that build on the beautiful interior of the 2016 Camaro. The back seats, while really only there for insurance and small children, are shaped well for booster seats or the family dog.

Trunk space is very good in the Camaro, unless you opt for the convertible, whose retracted top reduces the trunk to barely the size of a carry-on bag. Which is why the Camaro Convertible has back seats. Right? 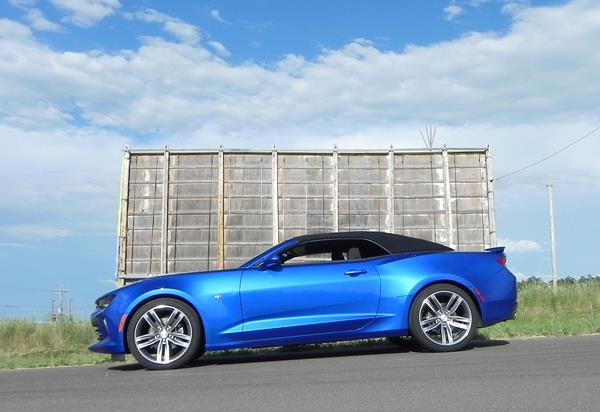 The new 2016 Chevrolet Camaro includes GM's latest touchscreen, which integrates Apple CarPlay and Android Auto along with crisp graphics and one of the clearest backup cameras we've seen. In any vehicle. The latest MyLink interface has more intuitive menus and a faster return upon touch, making it easier to use.

The upgraded options with OnStar, however, might make some users unhappy with its required connection to OnStar for things like Navigation and the like. We did find that the Android Auto connection was more useful than we've seen in many vehicles with similar connectivity, though, and thoroughly enjoyed the ease of use for the MyLink interface overall.

The 206 Chevrolet Camaro may be the most fuel-efficient muscle car, by nature, that you'll find today. That sentence might seem contradictory, as muscle cars and fuel economy are usually about as hand-in-hand as are Disney princesses and firearms, but it's a true statement when describing the Camaro today.

The four-cylinder engine option returns 25 mpg combined per the EPA.  The V6 model has an EPA-estimated 23 mpg combined. Our week in a convertible model with this engine and a standard transmission (rated at 21 mpg combined) found that this number is a bit low for the car, which averaged about 22 mpg overall. Despite our best efforts to torpedo those results with a lot of hard acceleration.

Finally, the EPA rates the big V8 engine at 19 mpg combined (manual) and 20 mpg combined (automatic). Not bad for all that muscle.

In all, these fuel economy numbers are some of the best in the segment by a wide margin. 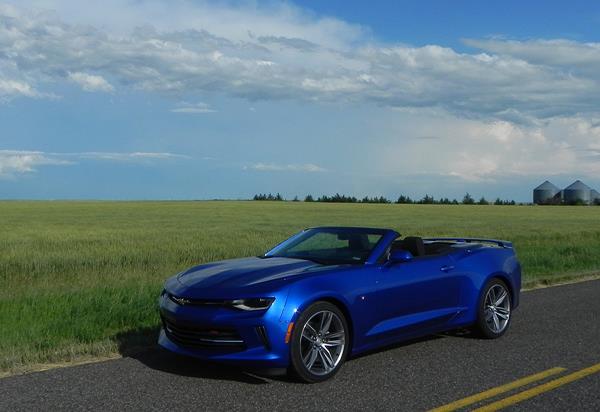 The 2016 Chevrolet Camaro scores a "Better Than Most" on the J.D. Power and Associates Vehicle Dependability Study list while the Chevrolet brand itself is relatively hit-and-miss with reliability expectations. Given the new nature of the V6 powering the Camaro, we could not give a top score to this new-generation Camaro, but feel that it is worthy of a good score regardless.

The 2016 Camaro scored well in Insurance Institute for Highway Safety crash testing. Roof strength was listed as only Acceptable (second-highest score), but all other tests conducted so far were scored "Good" (the highest available). The National Highway Traffic Safety Administration has not rated the 2016 Camaro as of this writing.

There are both low and high points to the 2016 Camaro's performance levels. The low point would be the fuel-conscious four-cylinder option and the high points would be the new V6 and the downright beastly V8 option. Transmissions include a six-speed manual as standard and an eight-speed automatic option.

The four-cylinder is not a slouch, but is not exactly performance-driven either. This 2.0-liter turbocharged engine produces a respectable 275 horsepower and 295 pound-feet of torque, but that's hardly motivating in a car the size of the Camaro by today's standard.

Knowing this, we can see that not much is lost in terms of MPG when looking at the new V6, which outputs 335 horsepower and 284 pound-feet of torque while giving the aforementioned EPA-estimated 23 mpg combined.

Finally, the massive 6.2-liter V8 in the Camaro's performance SS models outputs a growling 455 horses and 455 pound-feet of torque.

Any engine option will propel the 2016 Camaro to 60 miles per hour in under 6 seconds, with the four-cylinder doing it at just below that time, the V6 hitting it at about 5.3 in our hands, and the V8 having a Chevy-estimated 4 seconds for that sprint. That's considerably faster than most of the competing American muscle cars in this class and almost on par with the Camaro's older brother, the beautiful Corvette, which uses the same V8.

Unlike the Corvette, however, the 2016 Chevy Camaro is not as sly on the corners. It's a respectable track car, of course, but requires a bit more room and lower speeds to make the same turns. That's to be expected given the heavier build and nature of the Camaro, which is more about the sprint than the course. It's nevertheless a joy to drive on a curvy road or long highway and a lot of fun when growling around town as a cruiser.

The base price for the Camaro begins in the mid-$20s and goes up from there. Our mid-level convertible model rang in at just over $38,000 with options and delivery. By comparison, other models like the Mustang and Challenger are similarly priced. The Camaro adds some good options and accessories, especially in the mid-tier. It also enjoys a better resale expectation than do most Chevrolets thanks to its sports car nature, which also adds to its value.

We feel that the 2016 Camaro is a good purchase value overall, especially in the performance and mid-tier V6 options. 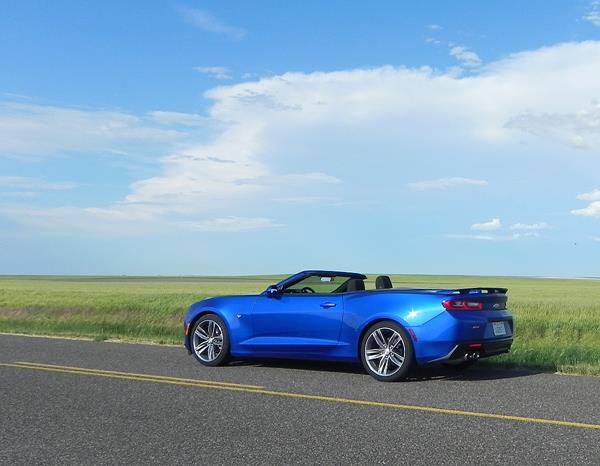 The obvious competitors to the 2016 Camaro are the Ford Mustang and Dodge Challenger. We could point out that higher-end Camaros verge on the price point of the average Corvette Stingray, however, and that most higher-end V8-powered muscle is found in the range of the Audi TT as well. For the most part, though, shoppers are likely to be considering a Camaro against a Mustang or Challenger.

The new Ford Mustang has some excellence that can't be ignored, including the new EcoBoost V6 options and improved handling characteristics of the car. The range-topping Shelby GT350 is much more powerful than the big V8 in this Camaro, but is also very pricey and somewhat exclusive. Compared to that, the Dodge Challenger has lower fuel economy in all of its engine options, but has the hugely popular and ridiculously powerful Hellcat variant with its tire-burning 707 horses.

In the end, choices will more likely come down to brand identity than anything else. The 2016 Camaro has its high points versus the competition, one of which, we feel, is its beautiful new exterior look. For most drivers who use the car daily, the high fuel economy ratings are also a big upside for the new Camaro. We found the V6-powered convertible in its mid-level trim that we drove as our test model to be an excellent all-around sports car in the American tradition with just enough power to feel muscular but enough daily usability to be more than just a toy.

For those reasons, we give the 2016 Chevrolet Camaro a top score as a "must see" for consumers.