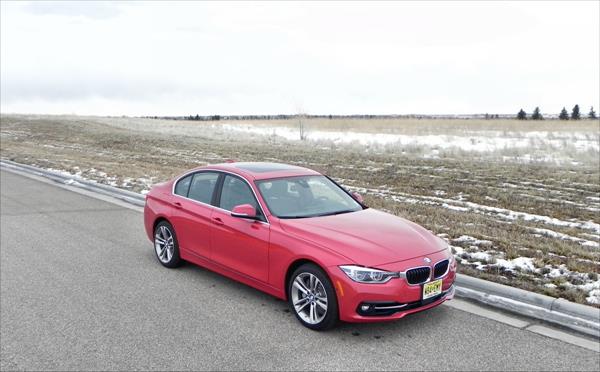 Overview (Final Score: A-)
The BMW 3 Series has set the benchmark for the compact luxury category for some time, offering one of the most well-balanced models in the BMW lineup. With beautiful styling, a great road presence, and plenty of powertrain and efficiency options to choose from, the 3 Series continues to lead the way forward for the segment.

The 2016 BMW 3 Series sees only a few updates from the 2015 model year, including some styling cue changes and a couple of chassis tweaks for better performance. Key upgrades are in some of the engine options and the infotainment. Some package shuffling includes new standard features that bolster the value proposition for this car.

This five-seat luxury sedan or wagon has something for everyone and it's in a value package that is likely much more affordable than might be expected of a BMW. 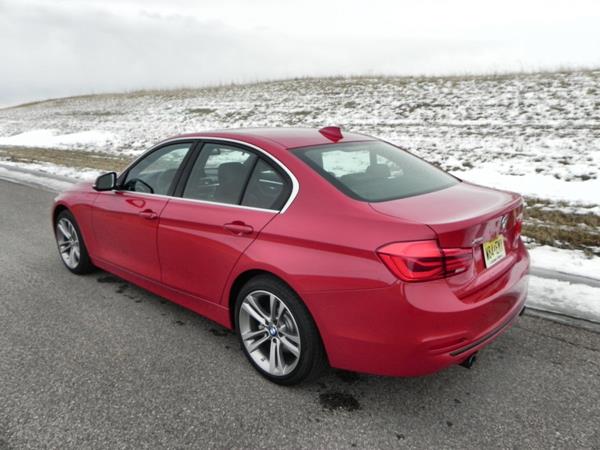 Exterior View (9/10 relative to market)
If anyone knows how to make a fine-looking luxury sedan, it's BMW. The 3 Series, personified by the BMW 340i we drove, has a very contemporary, elegant, and purposeful look about it. The "Teutonic flow" of the BMW sedans carries throughout the line and defines the German automaker's look on the whole. In the 3 Series, we're seeing that look done in a compact package.

It begins at the dual kidney grille centered by the BMW logo above. The peering headlamps with their slightly open, dual-lamp look shine below a fast-moving, low-humped hood that quickly glides up to the raked windscreen and rounded roofline. Strong fenders and a wide, almost unbroken scoop on the lower fascia finish the front end's powerful appeal.

The rest of the sedan is in a fastback style, which was pioneered by the European makes into what has now become the standard in the sedan classes. simple character lines run along the upper paneling, across the door handles, from front wheel well to taillamp. A light bulge at the bottom of the doors disrupts the otherwise smooth paneling to create a forward movement for the car at the curb.

Several style points are entirely BMW, of course, including the squared D-pillar cut that flies in the face of the "Euro" swoosh normally seen back there. Everything about the 3 Series is meant to convey movement and elegance, the mark of a well-made German vehicle. 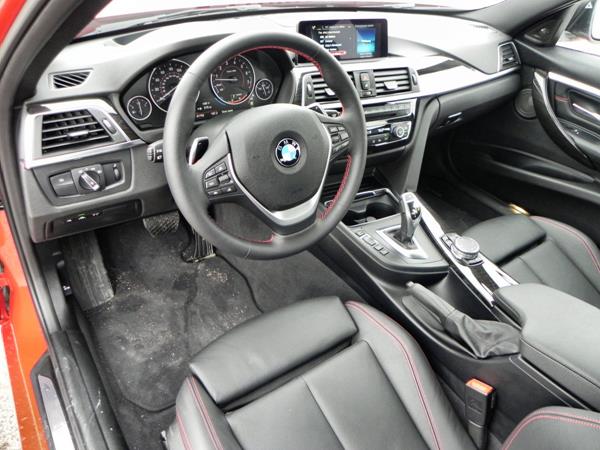 Interior Comfort, Quality, Ergonomics (10/10)
The 2016 BMW 3 Series has one of the most comfortable interiors you'll find in the luxury sedan class. The build quality and materials quality are both excellent and the subtle reminders of the brand's history, especially in the instrument cluster and dashboard design, keep the heritage of the Bimmer machines alive within a contemporary setting.

Seating is very good with plenty of adjustment, no matter the trim level of the car. The front seats are well done and the driver's focus is maintained with smart ergonomics and controls placement.

In the back, seating is very good as well, with more space than will be found in many rivals in the compact luxury class. Headroom in the rear is good enough for most in the sedan and better than average in the wagon. Trunk space starts at 13 cubic feet for the sedan (above average for the class).


Technology (8/10)
The standard infotainment for the BMW 3 Series begins with a 6.5-inch screen utilizing BMW's iDrive infotainment system. This is controlled with a command knob located ahead of the armrest on the center console. The knob allows for relatively intuitive control with menus geared towards finding the most-used items quickly. In advanced systems with navigation and other options, the top of the iDrive Controller is also a touchpad, allowing user input by drawing or moving on-screen. This is especially useful as a faster way to enter an address or phone number over the usual hunt-and-peck scheme most systems use.

For the most part, the iDrive system is intuitive and fairly quick. It responds fast and has good screen resolution. Some items are a bit over-complicated, though, and there are better infotainment systems on the market. Among them, though, BMW's iDrive is better than average. 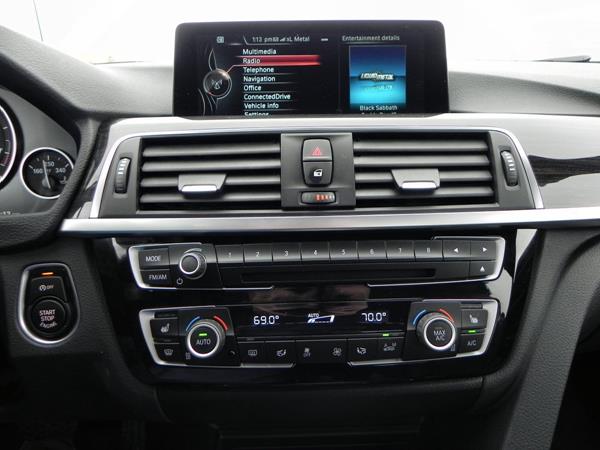 Fuel Economy (10/10)
In the luxury sedan classes, fuel economy is usually second fiddle to performance and looks. With BMW, things are no different, but with few exceptions, the 3 Series manages to achieve better fuel economy than the rest. There are four engine and two transmission options available for the 3 Series, depending on trim point and configuration. Most models are available as rear-wheel or all-wheel drive.

The 320i base model comes with either RWD or AWD in either a manual or automatic transmission. With either transmission, the RWD model of the 320i is EPA rated at 28 mpg combined. With xDrive, the EPA lowers that by a point to 27 mpg combined.

The 328d is the diesel-powered option for the 3 Series. The RWD option for this engine offers 36 mpg per the EPA. The AWD variants, including the wagon, for the 328d are EPA rated at 34 mpg.

Finally, the top most in the 2016 3 Series is the 340i. This model is EPA rated at 24 mpg combined in RWD with the manual transmission and 23 mpg combined with AWD. The automatic receives a rating of 26 mpg in both RWD and AWD options.


Predicted Reliability, Initial Quality Ratings (8/10)
The 2016 BMW 3 Series is expected to have better than average reliability and its initial quality seems solid. The 2015 model year was given a Better Than Most rating from the J.D. Power and Associates Vehicle Dependability Study and the virtually unchanged 2016 model year is expected to carry that forward. Only one safety recall was performed on the 2015 3 Series and none have been issued for the 2016 models. 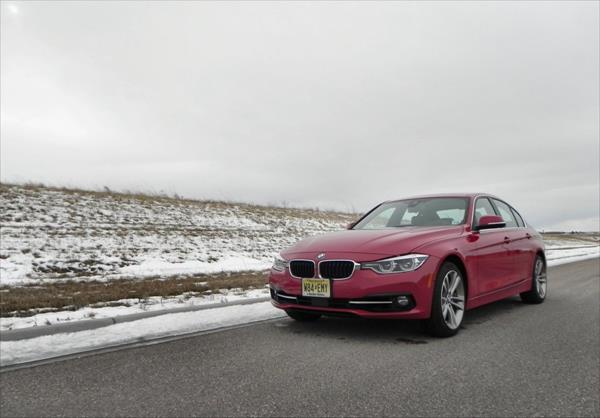 Safety (8/10)
The 2016 BMW 3 Series has undergone crash testing by both the Insurance Institute for Highway Saftey (IIHS) and the National Highway Traffic Safety Administration (NHTSA). The NHTSA gives the 3 Series a 5-Star overall rating with five stars in every test except the frontal crash, for which it received four.

The IIHS rates the 3 Series with its best "Good" score on all but the Small Overlap Front Test, for which it rates a second-lowest "Marginal."


Performance (10/10)
There are few things to fault the 2016 BMW 3 Series for and the least of those is performance. There are plenty of engine options for the car, all of which are built atop a well-tuned platform for maneuverability and driving enjoyment. From the base model 320i to the beefy V6-powered 340i, the 3 Series has something for everyone.

It begins with the 320i base model, which has a manual or automatic transmission option and can be had in either a rear-wheel or all-wheel drive powertrain (called xDrive). The manual transmission is a six-speed and offers well-mannered shift throws and clutch engagement. The automatic is an efficient and quick-shifting eight-speed with a smart feel.

Next up is the same engine with more power tuning, called the 328i model. This boosts the four-cylinder to 240 horses and 255 lb-ft of torque. Sub-six-second 0-60 times are doable with this model. The same transmission and drivetrain options in the 320i are available in the 328i.

The 328d is the diesel variant of the 3 Series. This is a turbocharged 2.0-liter diesel engine that outputs 180 horsepower and 280 lb-ft of torque. The automatic transmission is the only option for this engine, but 0-60 mph times are still good at about 7 seconds.

The most powerful option for the BMW 3 Series is the 340i, which utilizes a 3.0-liter turbocharged V6 that is rated at 320 hp and 330 lb-ft. Both the manual and automatic transmissions and RWD and AWD are available for this model. Our average 0-60 mph time in the 340i xDrive was 5 seconds.

On the road, the 3 Series hugs corners admirably and is very comfortable in all types of driving. On the highway, the sedan is quiet with little road noise coming into the cabin and most road imperfections being absorbed by the astute chassis. Maneuverability around town is also very good in the 3 Series. 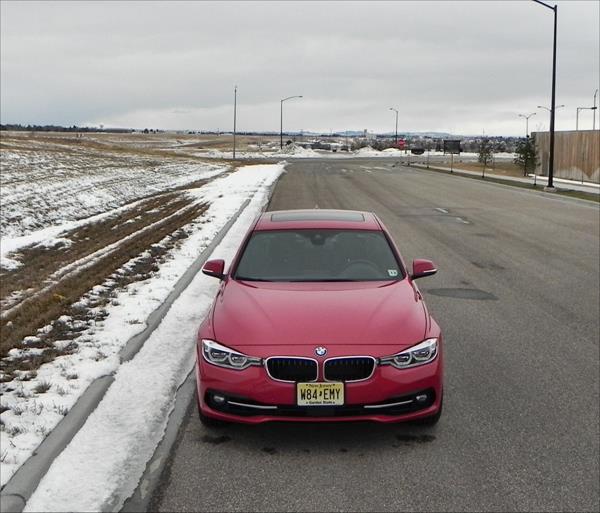 Pricing and Value (9/10)
Value for the dollars spent in the 2016 3 Series is better than might be expected. This well-driving, nicely outfitted little sedan has a starting price of 33,150 for the 320i model. That model comes well-equipped for the price, but the mid-level trims in the $35,000 to $37,000 range are a better value in terms of technology and performance for the buck. The diesel model is relatively expensive, at $42,000 on average, but returns excellent fuel economy and a nice driving experience. The powerful and fun 340i models are also in the over-$40k range and are very well done for the price paid.


Total Score and Competitive Comparison (72/80, 90%)
Chief rivals to the 3 Series in the compact luxury market are the Audi A4 and Allroad models as well as the Lexus IS 350 sedan. The Cadillac ATS is also worth noting. Of these, the BMW offers the best all-around mixture of driving excellence and value. The 3 Series continues to set the benchmark for others to achieve.

That final note summarizes our look at the 2016 BMW 3 Series. This is a well-done, nicely rounded, beautiful car with a well-balanced mix of performance, economy, and comfort. The unmistakable BMW elegance and beautiful interior experience are just icing on that cake.