Overview Overall Grade after 6 Categories: B 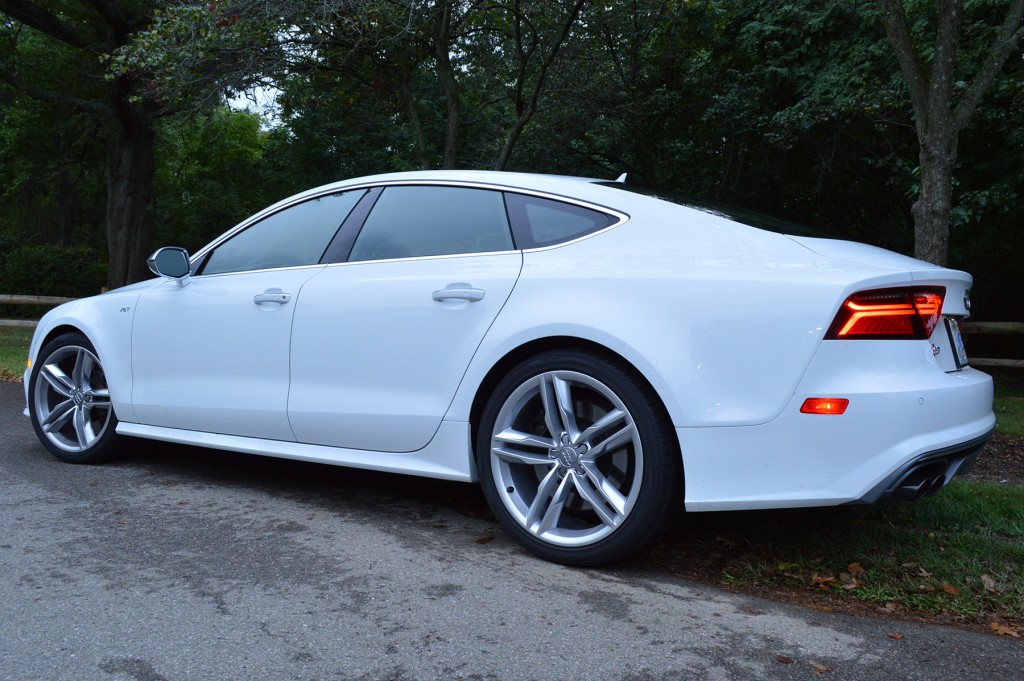 Similar, but not alike. This oxymoron statement perfectly describes the Audi S7 and the Audi A6. They're built on the same platform and both are hot, sporty, luxurious hatchbacks. And both feature current technology and German styling and engineering. But while there are similarities, there are also many differences to why the S7 warrants a higher price tag and warrants consideration, as a sportier version of the stout and sexy A7. For this model year, there are significant improvements to the overall look of the S7 as well a new, more powerful engine and more technology than ever before. 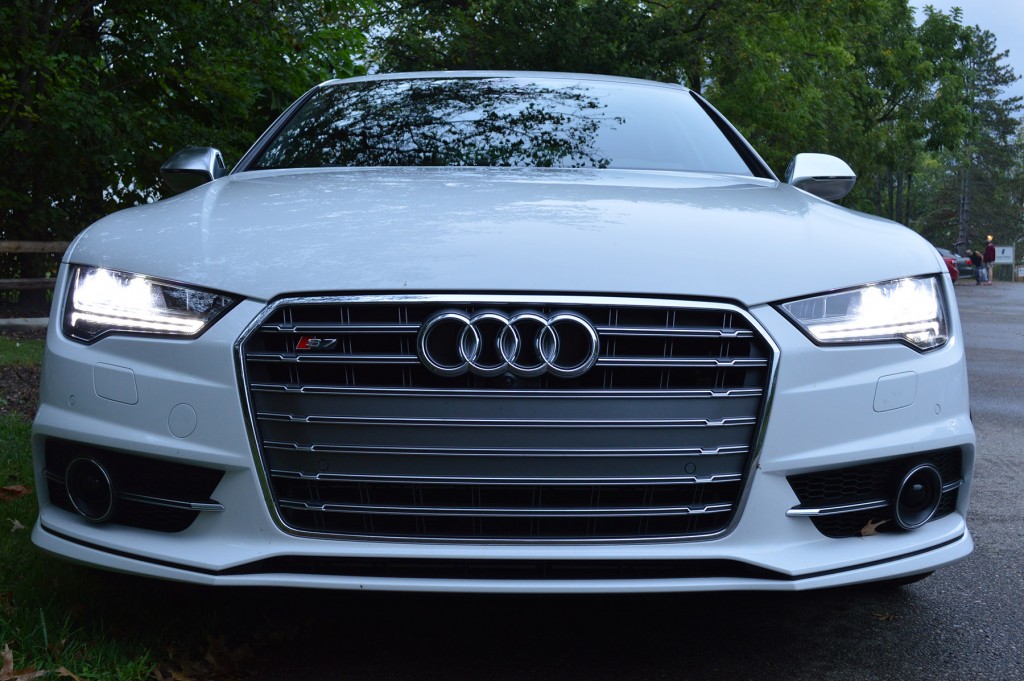 For 2016, the S7 has all-new looks, including a new front fascia and redesigned back end. The new front end is striking and distinctive, we especially loved the blacked out grille. The LED head lamps flow perfectly with the rest of the grille, and they all blend perfectly together, and look stunning at night. The back end is sleek. Trapezoidal tailpipes give it an aggressive look. With its hatchback styling, it was already sloping and sharp, but now, similar to the front end, rear LED tail lights give the entire back end a real presence (again especially at night). The S7 looks amazing at night, carving through the darkness with style and distinction. 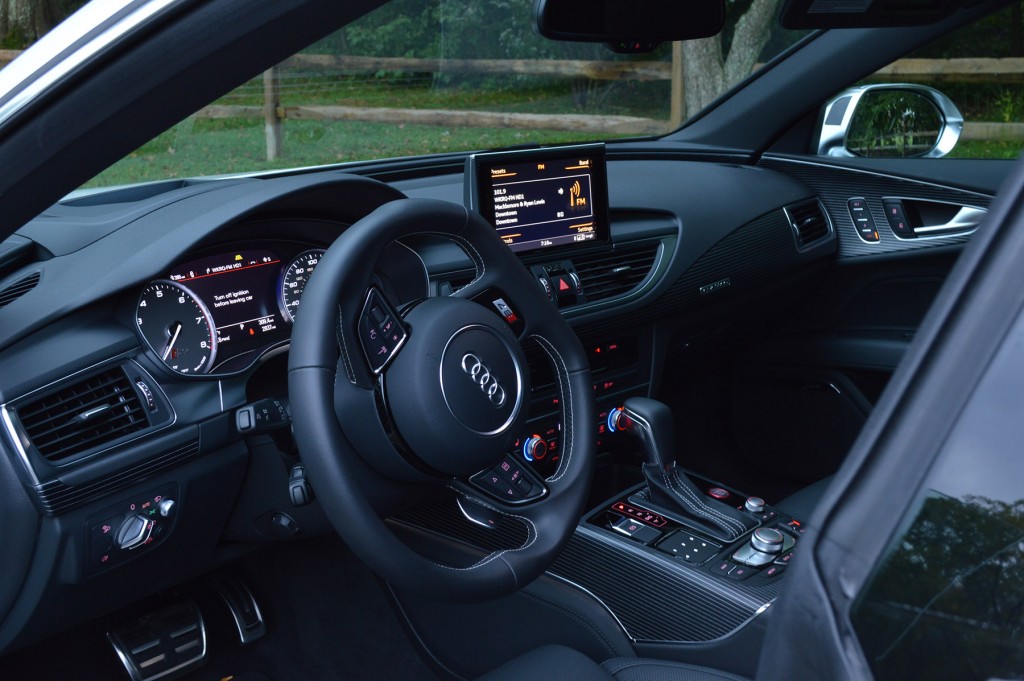 As mentioned, there are noticeable differences between the A7 and the S7, and the interiors of these two vehicles are starkly different. The S7 is not shy about heaping on the luxury while the A7 is a little subtler. There is no subtly inside the S7. Even smaller things like aluminum pedals and footrests are noticeable and let you know that the S7 is something special. The racing-style leather seats have accent stitching. This is upper-echelon type of luxury features, that you don't even see in most Audis. Generally, I have a disdain for racing style seats, but in the S7, they're plush and comfortable and offer a fantastic vantage point for the fun driving you'll experience. The entire front seating area is great for both driver and passenger, when it comes to legroom, headroom and cabin organization. However, rear passengers will find the back seat less than desirable. While legroom is acceptable, the headroom is lacking. Any passengers over six feet tall will not be comfortable, due to the constricted headroom thanks to the sloping hatchback style of the C-pillar. Unlike the A7, the S7 is only a four-passenger vehicle, which is a good thing, because otherwise it'd be absurd and uncomfortable to try to squeeze a third person in the back seat. Instead, a center console offer convenience including cupholders, and a USB charging station. Job well done there Audi! As a hatchback there's enough cargo room behind the second row. There is 24.5 cubic feet of space, but that space can be expanded further as that area can be lowered down to increase the cargo load. Again, job well done Audi! 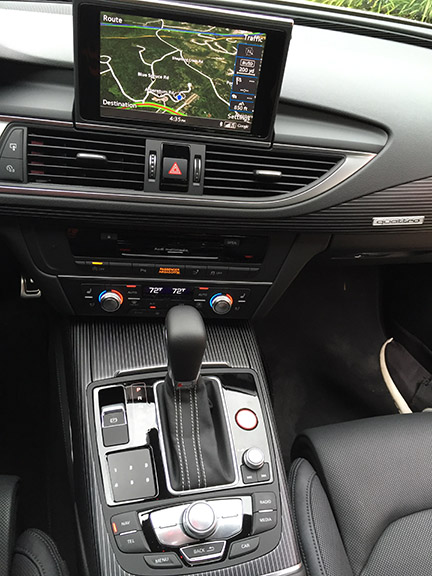 Audi, as a brand, is usually chock full of technology. The S7 is no exception. However, a criticism I've always had for Audi is that they often over engineer things, especially their infotainment systems. For the 2016 S7, Audi must have heard some of the fair criticism on the cumbersome nature of their infotainment system. The entire system is powered by a Multi-Media Interface (MMI) that included a way to spell out certain things like street names and other commands on a scratch pad. However, this technology, while extremely cool, often failed to do anything but cause frustration. In this new S7, the MMI is much improved, but still is awkward for the driver, and requires a lot of eyes-off-the-road staring to figure things out. An 8-inch color touchscreen is vibrantly bright and prominently placed in the center of the dashboard, which is well organized. That screen retracts upon start up, but can also retract with the push of a button. It is big and can be overwhelming and when you really just want to focus on driving, it has merit to retract it. I like having that option at least. The console-mounted MMI control is indeed less sensitive than in the A7, but it still falls short of my expectations. Continue to improve this system, and eventually it will merge the amazing technology the system does accomplish with a truly intuitive system. There's 4G LTE WIFI in this car. And as is the trend with today's modern car, there's plenty of smart phone integration with apps to interact with the car. The best app, which does integrate safely with the infotainment system and your smartphone is Apple's Siri Eyes Free, which reads texts to you. It takes a bit of time to set up and requires Bluetooth connectivity.

The 2016 Audi S7 has an EPA rating of 17 mpg/city and 27 mpg/highway. We found this to be an accurate rating, but achieving the 27 mpg on the highway will require a lot of restraint. In a week's worth of mixed driving where I definitely got into the turbo, I averaged only 21 mpg. That's about what you can expect from the S7, but it's not a car you're buying for the fuel economy.

There is currently no data available for this model or even the previous model. All other data is based on older models of the A7, which is not similar enough to compare.

The S7 has a 4.0-liter turbocharged engine and this year's model now has 30 more horsepower than the 2015 model. The 2016 S7 makes 450 horsepower and 406 lb./ft. of torque. That's power that is truly meant for high-performance cars only, and more power than the average consumer needs. But all of that power is well-contained and doesn't feel out of control ever, thanks in part to how well the seven-speed Tiptronic transmission keeps things shifting seamlessly. There is no turbo lag at all for the S7, which is uncommon for most turbocharged engines. The S7 comes with Audi's all-wheel drive Quattro system. With a re-engineered differential this model year, the responsiveness of this car is tremendous. Audis always drive amazing, but the S7 really outperforms other cars, and even other Audis on the road. It's quite, handles well, and is incredibly fun to drive.

There is only one trim offer on the S7 and it has a base price of $82,000. This is nearly $20,000 more than the base price of the A7. It's hard to justify that huge price difference, despite the incredible differences between the A7 and the S7. Is that much more horsepower and the refined, sports-car performance worth the price difference? That's up to the consumer. The looks and interior are noticeably more luxurious too, as we noted, but again, is it $20,000 better? My tester was loaded with extra options, as the German carmaker is known to do, and that took the final MSRP of my tester to $93,825, and that's encroaching the ridiculous six figures. Is the S7 a six-figure luxury car? It's nice, but I'm not sure it's THAT nice. 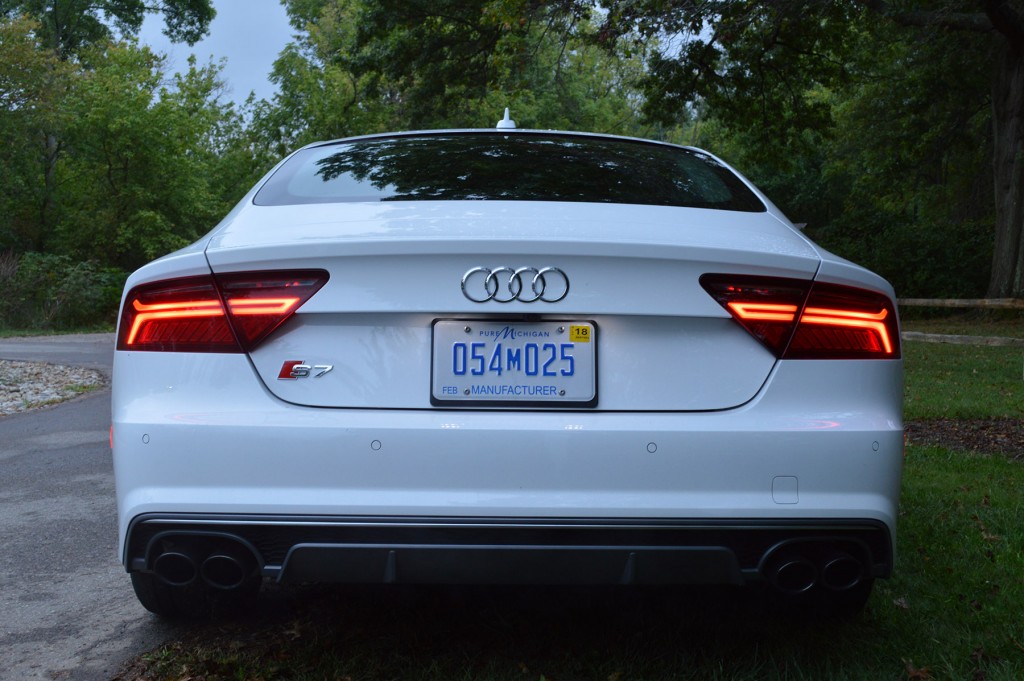 The only question that surrounds the Audi S7 is how much better is it than the equally nice A7? There are significant differences in both appearance and performance, but can it justify a jump to the next price point and the next stratosphere in luxury cars? It certainly is nice and the S in S7 stands for super, because it really is a superior sports hatchback