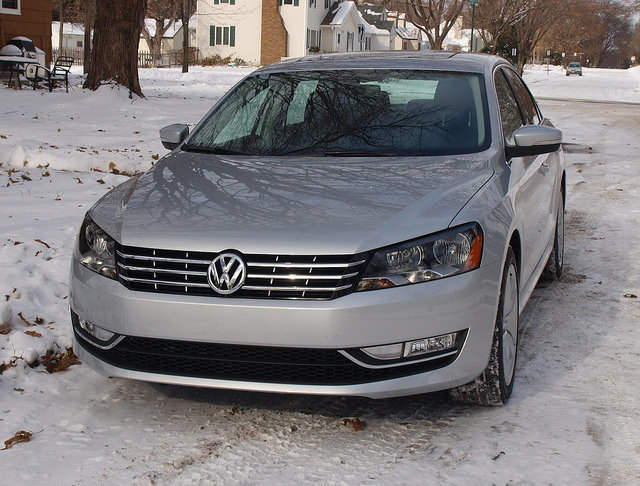 Overview (Overall Grade After 8 Categories: B) 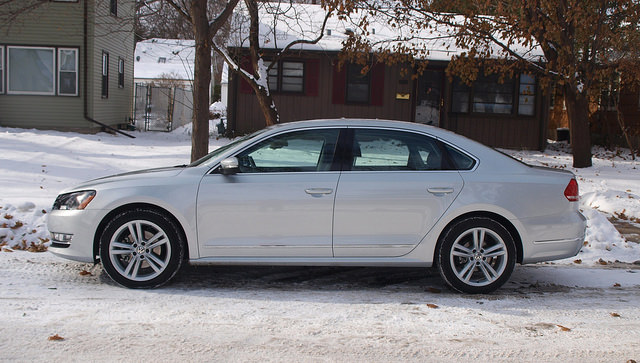 The Passat's design has been a point of contention among brand enthusiasts. Some would have liked to have the current generation global Passat in its place, but Volkswagen had a plan. To regain the North American market, it had to be...well..."American." This is a familiar tactic used by General Motors. What used to be an Opel Vectra became the Saturn L-Series. By doing so, they fleshed out the platform to accommodate American bodies and tune their suspensions for American roads. VW did exactly that to this Passat - take the global platform, stretch it, made it simpler for American eyes to digest, though retaining familiar VW design tenets.

The result is a familiar Volkswagen that is purely big-boned. Though there are some familiar lines, creases and other design elements that point to the VW badge up front, the Passat does not elicit a level of excitement that engage brand enthusiasts. It is rather plain, but very functional. Wide opening doors and a huge trunk lid are two things you rarely find on other Volkswagens. If you had no history with the brand, and want to be anonymous, the Passat works in that fashion. 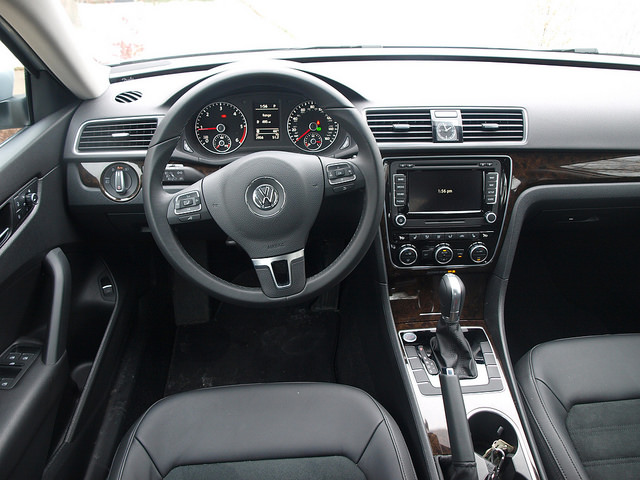 Step inside to a very spacious cabin. Front seat occupants have plenty of space to stretch out, unless you are tall and have the moonroof above you. Finding a suitable position behind the wheel will take some time, but you will find a competent place to operate the big Passat. Seats are on the small side, which is perfect for averaged sized drivers. Rear seat passengers benefit from a comfortable bench and loads of rear seat room. One might argue that the rear seat is more comfortable than a Toyota Camry - the one car the Passat has ambitions to compete against.

Given the design leap on the current Golf and GTI, one would be disappointed by an older dashboard design and older switchgear on the Passat. However, it works very well. It helps to the advantage of Volkswagen owners to use familiar stalks for the wipers, cruise control and switches for the lights, climate control and so forth. There are some logic issues regarding the infotainment system. When starting up, there is a lag in Bluetooth connection and initial phone pairing is not as clean and easy it should be. The steering wheel seems too thin for being a VW. Yet, instrumentation is familiar and logical to work with.

If there are two positive points to the Passat's cabin, it would be the Fender audio system and the gear selector for the DSG transmission. Fender's nine speakers emit amazing tones throughout the cabin, aided by a subwoofer that layers in the bass perfectly. Also, the short throw of the DSG lever is something for the enthusiasts to enjoy. It makes you wish for a manual lever instead.

Volkswagen introduced CarNet this year as their answer to General Motors' OnStar and Hyundai's BlueLink. It offers accident reporting, connection to roadside assistance, parental settings for younger drivers, remote vehicle access, navigation assistance and vehicle diagnostics. You can monitor your vehicle using a mobile app for better control of the Passat.

However, the technology side of the Passat is let down with an outdated infotainment system. The Passat has everything we need - navigation, SiriusXM radio and Bluetooth connectivity, the execution is lacking. We found lags in Bluetooth connection to our smart phone affecting the use of the audio system. The new Volkswagen Golf and GTI offers a new generation infotainment system that addresses these problems, along with Car-Net integration.

When you drive a diesel, you expect high fuel economy and a long range on ultra-low sulfur fuel. The Passat TDI averaged 42.5MPG even in cold temperatures that would challenge fuel weight. There is no question that you will find the TDI powered Passat a great alternative against gasoline models.

Predicted Reliability and Initial Quality Ratings (8 out of 10)
For 2013, the Passat received from J.D. Power their Automotive Performance Award for Mid-Sized cars based on the APEAL survey. However, initial quality and reliability ratings have been average or below, as rated by J.D. Power.

On Volkswagen's top sedan, there was a lack of active safety features on this model - save for the rear view camera. However, that did not keep the Passat from earning a Top Safety Pick rating from the Insurance Institute for Highway Safety. The National Highway Traffic Safety Administration awarded the Passat an overall rating of five stars. 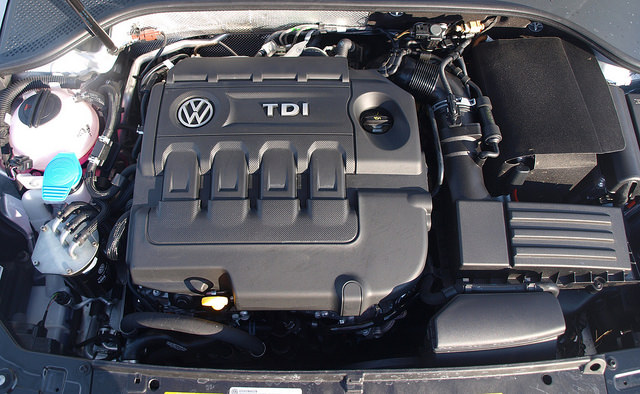 For 2015, a new 2.0liter version of the turbocharged diesel engine that has been the most desirable power source for Volkswagen makes its debut. While it only has 150 horsepower on tap, it will be the 236 pound-feet of torque that will win you over. When you step on the accelerator, it pulls away just like a V6. Plus, it is quiet and clean. That old diesel clanging no longer exists, while exhaust emissions have been cut to meet a 50-state standard. Power goes to the front wheels through one of the better transmission choices on any VW - the DSG. It is a solid gearbox, however, it would actually be more fun if it had either a Sport mode and/or paddle shifters. Only a few mid-sized family sedans would say that it had a dual clutch transmission with true manual operation.

The TDI is not the only engine available on the Passat. The standard engine is a 1.8liter TSI turbocharged four-cylinder with 170 horsepower on tap. You can also get a 280-horsepower 3.6liter V6 on the SEL Premium model.

Recent Volkswagens are known for having a sporting feel. The Passat was designed to offer comfort for passengers above all else. This is cause for debate pitting enthusiasts against family sedan consumers. The driving experience of the Passat tells the tale of comfort above all, considering how smooth and supple the big VW rode. Not that it is a bad thing, but that depends on which kind of consumer you are. Clearly, enthusiasts will be put off by the supple roll and lean in the curves and the light steering system. There is an ample turning radius, but the light steering action actually will respond quite quick, despite being a bit disconnected.

Braking is very good. Stops are sharp and exact in normal and panic situations. This leads to the traction control system - something of a hit-and-miss with Volkswagen products. On the Passat, it works quite well to provide necessary traction to the right wheels. I would love to see VW provide a suite of active safety features and possibly its 4Motion all-wheel drive system on its top trim of the Passat - if not all models.

The big Passat starts off with a basic S model with the 1.8liter TSI turbocharged engine starts at $22,120. My TDI powered SEL top range example came to $34,405. As high-end mid-sized family sedans reach further into premium sports compact sedan pricing territory, one could argue that the diesel engine alone is worth the price of admission. However, you can still get the same TDI driveline in the less expensive SE trim, starting at $26,825. 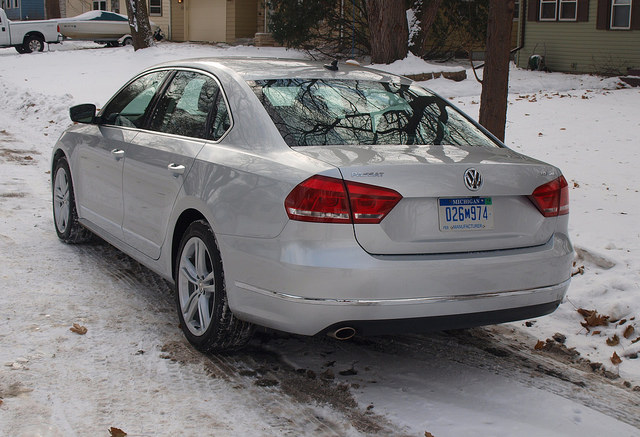 The Passat is up against some pretty stiff competition. The aforementioned Camry, Fusion, Sonata, Accord and Altima lead the pack in this class. However, consumers would also shop the Passat against the Kia Optima, Chrysler 200, Mazda6 and Chevrolet Malibu. To reiterate the point: None of these competitors have a diesel engine option available to compare against the Passat.

The Volkswagen Passat represents the modern diesel big sedan. It also represents the only diesel fueled option among family mid-sized sedans. It all seems to come together as we find alternatives to the good ol' gasoline fueled internal combustion engine. We could argue between hybrid drivelines, plug-in electric propulsion or diesel fuel, but it just seems fair and logical that diesel offers a longer fuel range, despite the higher price fueling up per pump.

As for the Passat competing in a highly competitive and crowded field, Volkswagen brings a lot to the table. It has the cabin space and smooth ride to satisfy a lot of families and businessfolk. What it needs is more refinement to excel in this field. Perhaps in a mid-cycle refresh we could see some improvements in the Passat - starting with the infotainment system and the switchgear.

It takes a good sedan to bring in the customers. The Passat has some of that equation down. The dealmaker has to be the TDI diesel. That alone should win family sedan consumers over.