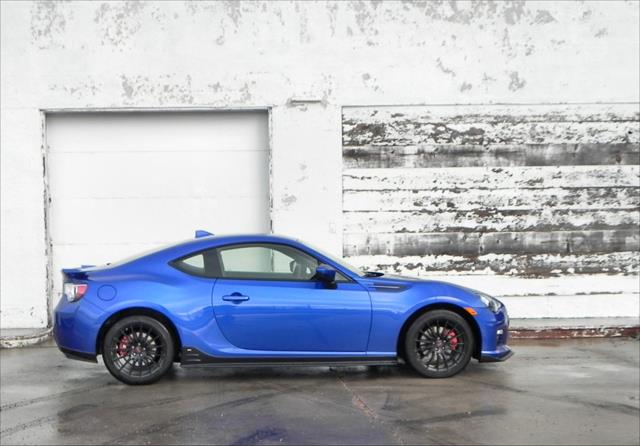 Overview (Final Score: B+)
To summarize the 2015 Subaru BRZ is simple: it's fun times with an affordable price tag. Entry-level sports cars are making a comeback and are no longer the privvy of European makes. The Subaru BRZ is a collaborative design effort with Toyota, who sells near-twins as the Scion FR-S and the Toyota FT-86 both here and abroad. Collectively, the cars are often referred to as the "Toyobaru twins."

Like most back-to-basics entry-level sports cars, the 2015 BRZ focuses on the driving experience rather than power output. Unlike many who have made this claim, though, the BRZ actually delivers with a fun-filled and dynamic driving experience that few can match.

The road comes through to the driver very well in this car and handling is superbly tuned. In the manual shift transmission, the shift throw and clutch are tight and fast, making for a very sporty drive experience despite the lack of engine power relative to other sports cars on the market. So although the 2015 BRZ probably won't win many races on the drag strip, it will always thrill on the open road and twisty highway and makes even a dull commute into a "wake up and drive" experience.


What We Loved About the 2015 Subaru BRZ 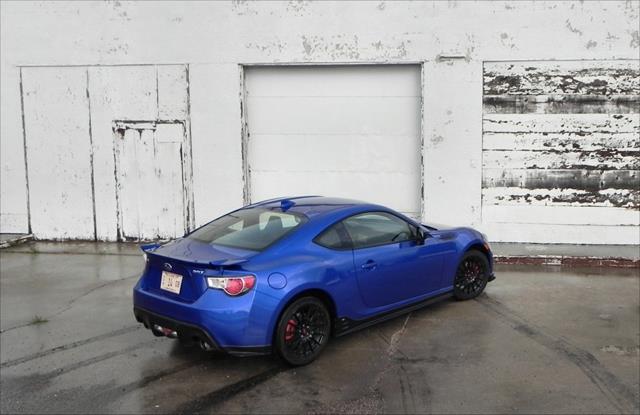 Exterior View (9/10 relative to market)
There's no questioning the fact that the 2015 Subaru BRZ is a great-looking little sport coupe. Its lines denote a certain finessed muscularity. The BRZ combines the power of a European sports car's appearance with the grace of a Japanese street rod. Without looking over-budget.

The front grille is understated, with a scoop below and a straight line clipped underneath the hood, making for a sharp fascia. Headlights peer out from underneath hunched fenders. From head-on, the 2015 BRZ looks low and sleek rather than intimidating.

Along the sides, the fast coupe roof is accentuated by light curves on the doors and a heavy underline along the bottom of the doors, leading up to a swooping uppercut to accent the strong rear fenders and muscular rear quarter.

The overall look is a fast teardrop that promises nimble speed. It's very good looking for a car in any price point, but even more amazing given the low MSRP of the BRZ. Most of the car's goodies are had with the base Premium model, but the upgraded Limited and Series.Blue models add foglamps, and a rear spoiler to the exterior. The latter also adds some limited edition styling tweaks. 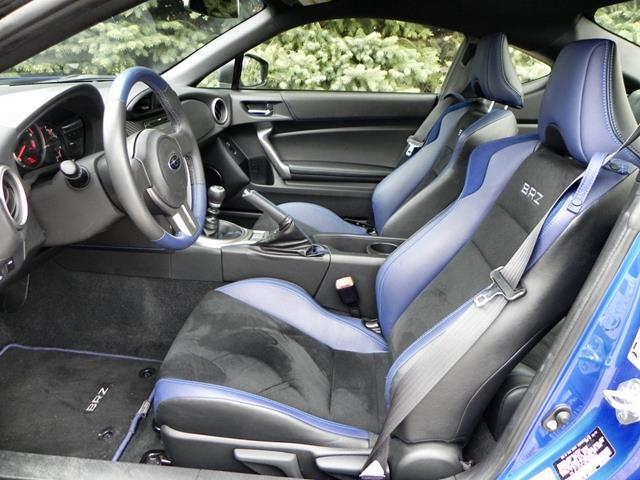 Interior Comfort, Quality, Ergonomics (8/10)
Inside, the 2015 Subaru BRZ shows its shared design with the Toyota versions (FT-86 and Scion FR-S). The interior is also where the "back to basics" philosophy of the Toyobaru family is showcased. You'll find nothing fancy in this car, but for the most part, you will find a pleasant and ergonomic experience.

The base model includes navigation, hi-def radio, Bluetooth connectivity, and a small touchscreen interface. Seating is comfortable regardless of trim level, though the upper trims do add some adjustments not had in the Premium. The seating is very low and pushed back, as befits a sports car, and the back seats are largely useless except when carrying children in a "must take the kids" scenario. Getting a child safety seat into the back is an experience akin to a first-time yoga class, but it's possible if you must. The back seats do fold down to expand the trunk space, though, which stands at almost 7 cubic feet on its own.

As a sports car, however, the 2015 BRZ is much more comfortable than its small size and diminutive price tag might suggest. The base model comes well-equipped and the Limited and Series.Blue trims add leather and suede upholstery and heated front seating and mirrors. 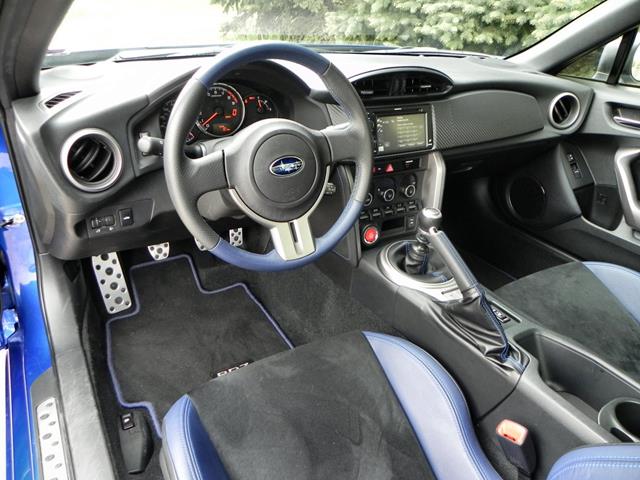 Technology (7/10)
If you're a serious tech buff, you won't find much inside the BRZ. That said, this is a car focused on driving, not infotainment, so the technology offered is largely just to cover the basics of what's expected out of a car today. Bluetooth and other connectivity are standard equipment, as is navigation. The stereo is an eight-speaker system that does very well in this small cabin and some smartphone app integration is possible via Aha Radio and an auxiliary audio jack and USB plug.

The 6.1-inch touchscreen seems small on paper, but is rather large in a car this tiny and so does well in the BRZ. It is not, however, imbued with a user interface that is made for simplicity or quick use. The menus are slow and sometimes confusing and the buttons are so small that they're almost impossible to use while driving. The good news here is that a decent voice activation system is also built-in and takes much of the frustration out of the infotainment system's clunky use.

In all, the tech inside the 2015 BRZ is good, but not stellar, and should be a side note to most who buy this car. 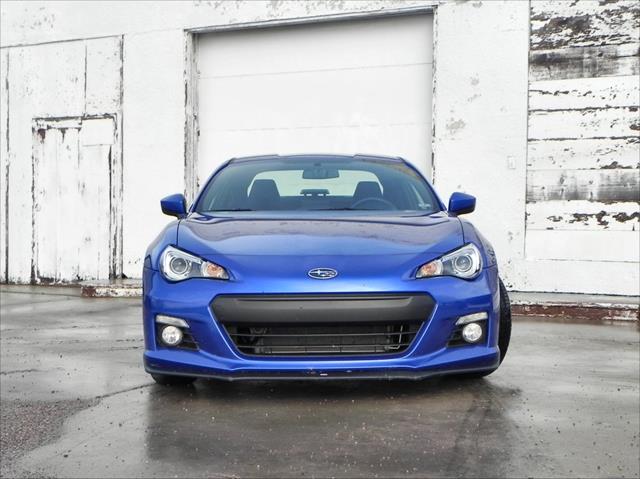 Fuel Economy (8/10)
The manual transmission option for the BRZ lowers fuel economy to 25 mpg combined, per the EPA. This means 22 mpg in the city and 30 mpg on the highway are possible in the car with this configuration. The upgraded automatic transmission, however, adds a lot of MPG to the car, giving the 2015 Subaru BRZ an EPA rating of 28 mpg combined (25 city, 34 highway).

In the real world, our 2015 BRZ Series.Blue test model achieved the EPA's combined rating for the manual transmission despite our spirited driving habits in this little coupe.


Predicted Reliability, Initial Quality Ratings (7/10)
The 2015 Subaru BRZ offers a solid build and good ergonomics, but ranks only average in the J.D. Power and Associates Vehicle Dependability Study. The BRZ is a collaborative vehicle built by Subaru and Toyota and has been on the market without significant redesign for some time. Historically, the car rates well, but not much above average, for its general reliability. We do note that no recalls have affected the BRZ this year.


Safety (9/10)
The 2015 BRZ does surprisingly well in crash testing for such a tiny car. The National Highway Traffic Safety Administration gives the BRZ a total score of five out of five stars, with four stars for frontal-impact and five everywhere else. Similarly, the Insurance Institute for Highway Safety rates the 2015 BRZ with its highest possible rating of "Good" in almost every test. The small-overlap frontal offset test, which has become the bane of small cars, rated at a second-best "Acceptable" for the BRZ.

Most of these high safety marks come courtesy of the well-designed body framing and solid suite of safety technologies included as standard equipment in the little BRZ. This includes a suite of airbags and strong braking dynamics. 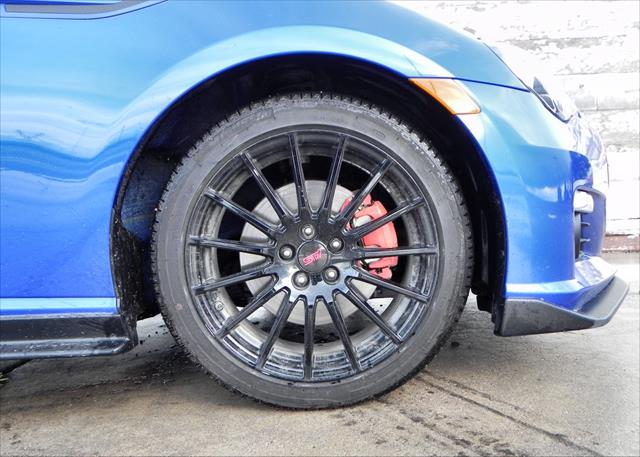 Performance (9/10)
The 2015 BRZ is a sports car, but its focus is on the driving experience, not 0-60 times or quarter mile sprints. As such, it's a bit slower on paper than some V6-powered rivals might be, but that shouldn't detract from the car's true performance: a love of the road.

Powered by a 2.0-liter horizontally opposed (boxer-style) four-cylinder that outputs a respectable 200 horsepower and 151 pound-feet of torque without turbos or gimmicks, the BRZ has a choice of a six-speed manual transmission or a six-speed automatic with paddle shifting. The Series.Blue is manual only.

All of this output runs to the rear wheels in a lovely cascade of small engine grunts. Zero to sixty miles per hour runs can be done in around 7 seconds with the manual transmission, but where the BRZ shines is on the open, curved highway or side road where it caresses the corners and jumps happily into the straights with the driver getting a full feel of the road along every inch. The 2015 Subaru BRZ is low, fast, sharp and fun. The only comparable car on today's market in this regard is the Mazda MX-5 Miata. Their driving experience and feel is very similar, though the BRZ has a tighter feel and the Miata offers topless good times.

One last thing we noted with much surprise is the BRZ's very short and precise shift throw in the manual transmission. Not even pricey European sports cars can always promise that kind of excellence in a manual. It's thoroughly enjoyable to operate and requires little more than a wrist flex to move gears. A highly positive clutch complements this attribute. Very, very well done and a real pleasure in a low-priced sports coupe like this. 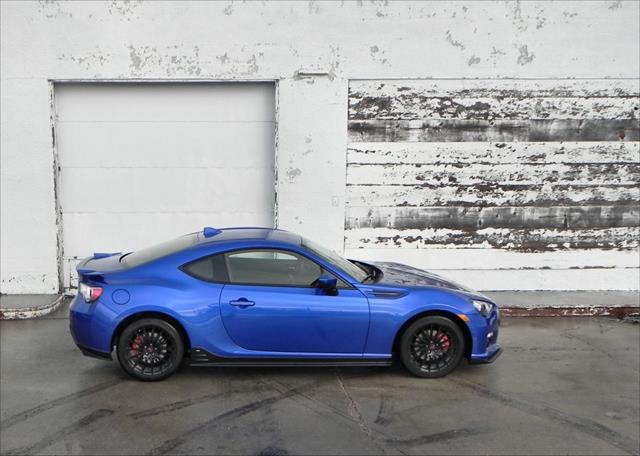 Pricing and Value (8/10)
Value is subjective, of course, but the BRZ competes with a near-twin from Scion that has a slightly lower price point. As such, a value judgement is easier to come by with this car. Although more expensive, the Subaru BRZ has more standard equipment and a more refined interior than its FR-S twin from Scion. Compared to other vehicles of similar market, such as the Miata we mentioned earlier, the BRZ delivers a solid value for the price.

There are some caveats, however, that are worth mentioning. It's a rear-wheel drive only car and summer tires are standard equipment from the factory. This could make it a "six month" car for many buyers in some regions. A few vehicles in this segment offer front-wheel drive, making them potentially more suitable in winter environs.

Overall, though, we give the 2015 BRZ high marks for price point and value. The base model begins at around $25,500 (plus delivery) and the top shelf Series.Blue limited edition rang in at about $30,000 (delivered) as we drove it. Most will find those prices fair, though the latter verges into European entry-level sports car territory. 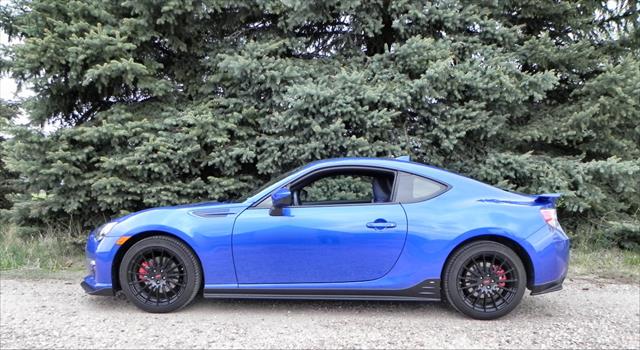 Total Score and Competitive Comparison (65/80, 80%)
We've mentioned several competitors to the 2015 Subaru BRZ throughout this piece, including its twins at Scion and Toyota as well as the fun road car to be had in the Mazda Miata. In our opinion, the FR-S scores slightly lower than the BRZ due to its less refined interior experience. The BRZ ranks about equal to the MX-5 Miata, though, for fun and value. The retractable roof on the Miata is a hard thing to beat, but the back seats, diminutive as they are, in the BRZ help make up for that. The BRZ is also a bit more spirited and brisk on the road by comparison.

Another key competitor is the Ford Focus ST, which is front-wheel rather than rear-wheel drive, but which offers better engine output at about the same price point. More expensive competition would include the Nissan 370Z and the Hyundai Genesis Coupe. Less expensive and less performance-capable cars might also include the Hyundai Veloster while the more expensive and equally engaging Volkswagen GTI is another option.

Comparatively, we really liked the 2015 BRZ and found it to be a very well-done little entry-level sports coupe. On the market, it struggles against the lower-priced and better-advertised FR-S, though, but still performs very well as Subaru's only rear-wheel drive sports car offering. The 2015 Subaru BRZ is a somewhat more upscale little entry-level sports coupe with a surprising amount of sophistication for the price tag.