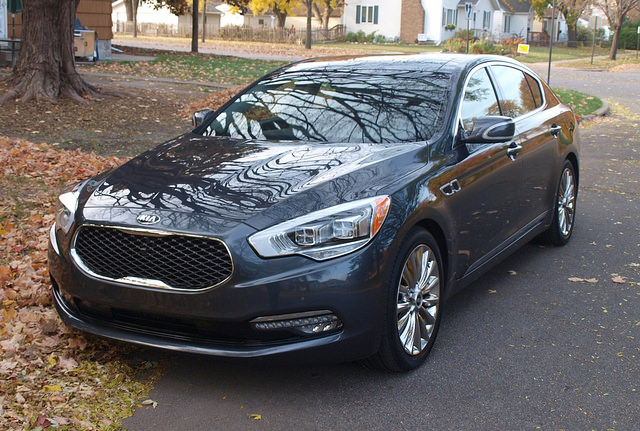 Overview (Overall Grade After 8 Categories: B+)

You read and heard this before. It is usually accompanied by laughter and a comedy routine. One does not consider Kia a maker of fine automobiles. Well, that was before they merged with Hyundai. Since then, we heard all sort of things of Kia was supposed to be. Was it supposed to be a value brand? Or, was it to be the sportier of the two, as distinguished from Hyundai.

Then, the brand hired Peter Schreyer to design their cars. One "tiger" grille after another, with styling cues that could be seen as interpretations from his former employer - Audi.

There is no doubt that Kia is serious about making a car that is on par with flagship sedans. The K900 sedan (known as Quoris or K9 outside of North America) is the result. It looks big, bold and aspirational. But, it is still a Kia. It looks like a Cadenza - the full-sized, front-drive offering.

This is all surprising. Still, one must have proof that Kia did pull off the biggest head scratching moment in automotive history. So, I must prove the worthiness of the Kia K900 in a segment that demands the highest standards of luxury, performance, quality and status.

The spec on the car being reviewed is the VIP package with the 5.0liter V8 under the hood. That alone should make it competitive with the world's best flagships. Or, does it? 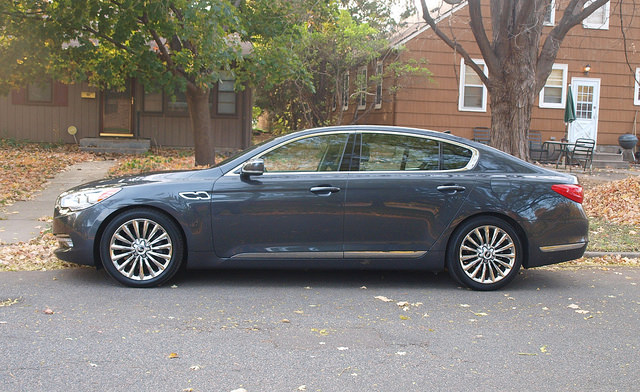 The point was made before - the K900 looks like the spitting image of the big Cadenza. That is only if you spot one from a quarter-mile away. Get closer to the K900 and you will see the difference.

The "Tiger" grille is present, but is larger than the rest of the Kia family, set on a blunt front end and large headlamp clusters. Each module inside of these headlamp units have fed lights each - twelve light in total. They emit a good beam of light ahead of you. The side profile looks bulkier, but for a reason. It is that feeling of security flagships sedans should embody. The roof is typical Kia, as are the wide opening doors. The rear end looks very derivative - think Lexus LS to see why. Big chrome wheels set off the K900's look.

In all, it appears that Kia has made the K900 look like a flagship sedan.  However, the K900 works as just a handsome big sedan that is conflicted between its status and its badge. 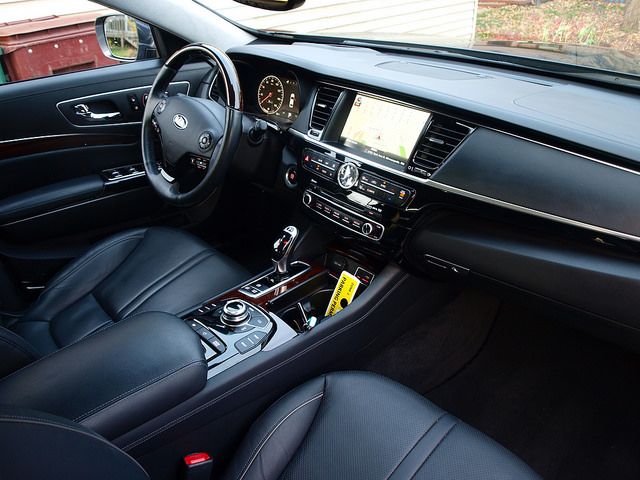 Stepping inside the K900's big cabin brings up another question: is it a luxury sedan or just another Kia?

One answer comes from looking at the instrument panel. It appears to be shared with the Cadenza, but the K900 is wider than the other Kia. Being almost the same is a good thing, since the K900's fascia offers a larger instrumentation screen that changes depending on which drive mode you are in. Sport turns the full TFT screen into a digital display. Switching it to Normal or Eco returns the screen to a regular analog cluster.

The steering wheel is big and luxurious - just as you expect from a flagship. Switches are intuitive and good to the touch, though some switches on the steering wheel are a bit tricky to figure out at first.

The seats up front are large, comfortable and accommodating. It is also balanced between support and cushion making the front seat occupants more relaxed in the road - or just standing still. Power adjustments are on the door panel, including lumbar and seat cushion length - both part of the VIP package. Where the K900 gets its flagship credentials are in the rear seat. With 38.2 inches of leg room, the K900 becomes limousine-like in accommodating that special person in the back. The VIP package adds reclining rear seats, rear climate and audio controls. There are a set of sun shades to in the rear and side windows for both protection and privacy. 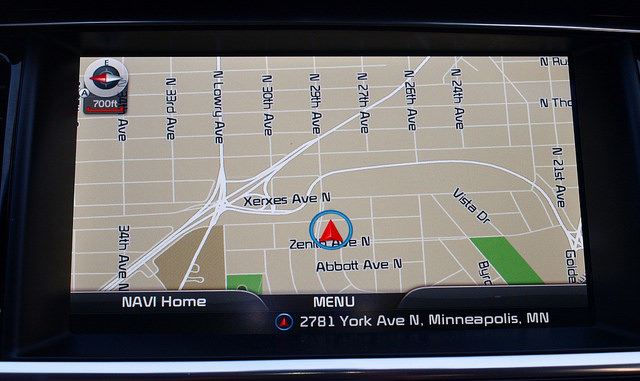 In the middle of the instrument panel is a large 12.3-inch screen that houses the infotainment and some vehicle functions. This is not a touch screen, however. Controlling the UVO-supported functionality is done through a knob and some associated buttons on the console. Audio is filtered through a 17-speaker Lexicon system.

Using the UVO eServices app on your smartphone, you can get roadside assistance, use the satellite connection to locate your vehicle and check on the health of your car. There are no fees to use this service.

Park Assist is standard in the K900, which gives the nervous driver a full view around the car by the use of cameras to help make that perfect parking job easier. It also helps in determining curb distance, a huge issue with on-street parking situations.

One does not expect exceptional fuel economy from a V8-powered flagship sedan. Our tester averaged 18.7MPG - which is better than expected. On the highway, our K900 gained a 25.5MPG - still remarkable considering the weight of the car.

Being a new car, no data is available to see its reliability and to calculate service costs on the K900. Kias are improving overall however, and overall quality feel of the K900 is evident. Actual confirmed data would help.

Kia pulled all of the stops to equip the K900 with a host of active and passive safety features - all standard. The K900 comes with blind spot monitoring, lane departure warning, rear cross-traffic alert, parking sensors and an Advanced Smart Cruise Control.

Choose the VIP package, and you get one of the best and brightest heads-up displays in the business. The graphics are clear and comprehensive, concentrating on displaying warnings from the active safety features.

No crash test data for the K900 was available at the time of this review. 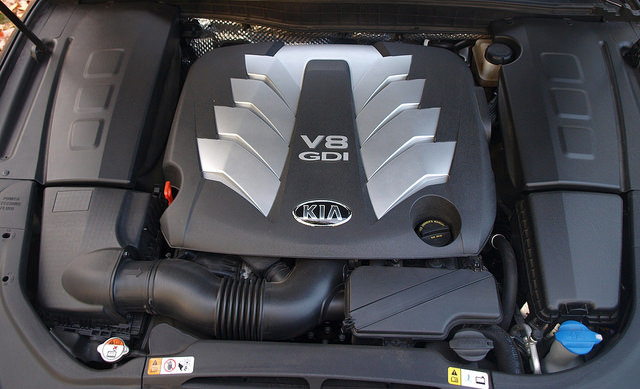 This is not the first Kia powered by a V8 engine. Yet, it is certainly the most powerful Kia ever. The Tau 5.0liter V8 has 420 horsepower and 376 pound-feet of torque to manage 4,643 pounds of flagship sedan. This power is channeled through a new eight-speed automatic on to the rear wheels. There is no question how well it performs - fast, quick and full of quiet thrust.

The aforementioned three drive modes come into play with almost every aspect for the K900's performance and driving dynamics. Yet, there are only nominal differences between each three - steering and suspension feel in Sport, slower shift points in Eco, just to name a few. The overall impression of the K900 in either mode is one where there is a balance between cruising along at highway speeds and the occasional need for enthusiastic driving.

That translates into a smooth, comfortable ride in any drive mode. It simply rides like a flagship sedan. Bumps and road imperfections are simply smoothed out. On the other hand, handling is quite soft with a tinge of roll through the corners. Push the K900 through some backroads and it reward you handsomely with an eager feeling.

In terms of steering, it is a mixed bag. A large steering wheel makes quick maneuvers a bit of a chore. There is also a feeling of disconnect from the system itself. The surprise is how it all eventually reacts with tight cornering and response when it needs to. The brakes work smoothly making sure stops through its large disc rotors. Expect short normal stops and great modulation during panic situations.

It would be overstating this review to say that the K900 is clearly Kia's most expensive product. Base price for the K900 Premium model is $54,500. Our VIP tester came in at $66,400. Compared to other flagship sedans, that is still a good value - badge aside. 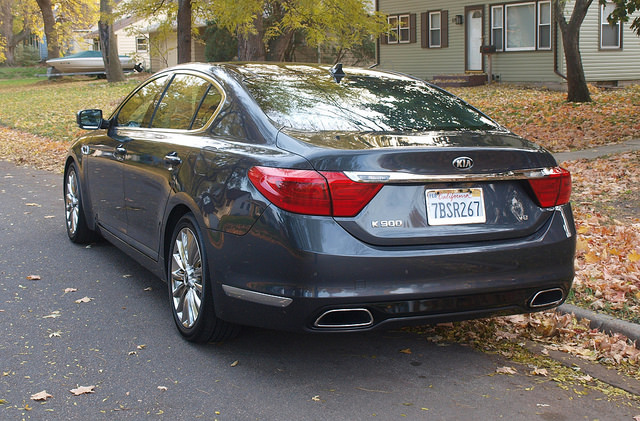 The K900 is a flagship that shakes up everything you know about luxury cars. Aside from the Lexus LS 460 and the BMW 750i, the K900 competes against the Hyundai Equus, Mercedes-Benz S550, Jaguar XJ, Audi A8 and Maserati Quattroporte. Only the Equus matches in the price range, while the rest of the segment range up from the mid-$70,000's and up.

That is not to say that the K900 is uncompetitive. Far from it. It offers a lot for the money, despite it being considered "too much to pay for a Kia." Is $66,000 worth spending on a Kia? It also depends on whether the K900 fits your lifestyle and your aspirations.  It is a wonderful flagship sedan that does match up to its competitors and offers up luxury on their level. But, it also comes with a huge issue - the badge. It all comes back that it being a Kia.

Would you rather balk at the badge? Or, enjoy a solid flagship sedan for under $70,000? The choice is yours.