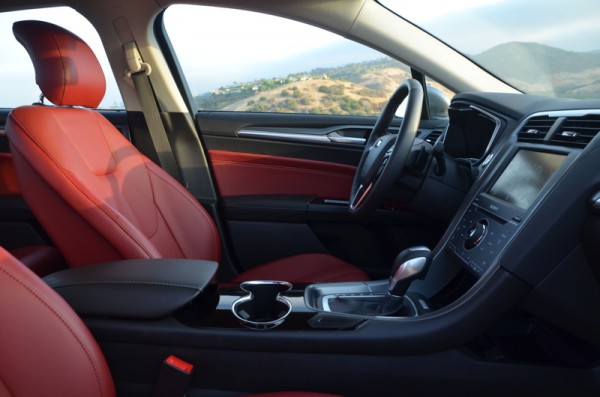 Overview (Overall Grade after 8 Categories: B)

We thought that we pretty much had the family sedan segment all figured out when our test 2015 Ford Fusion 2.0 liter EcoBoost sedan rolled into our life for a week of tough testing traveling over 1,000 miles all around Southern California's pothole lined freeways. We had driven all of the Fusion's natural rivals and frankly were not expecting it to perform as amazingly as it did and for it to show itself to be class leading in so many key areas. It forced us to completely rethink "what makes a great family sedan?"

Well, if a wide array of choice is one thing you want from a family sedan then the 2015 Ford Fusion can provide that for you and then some. Not only does it come with our 2.0 liter 240 horsepower/231 lb. feet of torque turbocharged EcoBoost 4-cylinder but there is also a smaller 1.5 liter Ecoboost motor good for 181 horsepower/185 lb. feet of torque and an entry level 2.5 liter 175 horsepower/175 lb. feet of torque Duratec engine. But wait, there's more! Ford also sells not only a hybrid version of the Fusion with 188 horsepower/121 lb. feet of torque combined but also a plug-in hybrid as well called the Energi which offers up to 195 horsepower combined and can travel up to 19 miles in electric mode up to speeds of 85 miles per hour. Impressed?

While it is quite obvious that Ford left no stone unturned when it came to building a Fusion that could appeal to everyone, does it succeed on that count or is it the proverbial jack of all trades and master of none. Thankfully no, and while we haven't driven every powertrain combination available with the Fusion we did spend the day with both the Hybrid and Energi Fusion models and found they both felt a whole lot like driving any normal car albeit the hybrid did make us feel like the car had a tiny turbo attached, so difficult did we find it to detect any electric motor whine. But as with any electric motor, the car gets a nice boost when accelerating from a stop. The Energi was just very, very quiet and when the gas motor turned on we hardly noticed.

But given that the Fusion sells most of its volume to consumers buying the gas engine variants we will stick to talking about the 2.0 liter EcoBoost model we drove for an entire week. Not only did it have enough accelerative potency to put it up there with personal family sedan favorites like the 2015 Kia Optima Turbo, 2015 Honda Accord V6 and the admittedly slow selling (but not slow) Volkswagen Passat VR6 but it also simply glided over bad Los Angeles freeway pavement as if it was a 30 foot long stretch limo with an air suspension. Not sure how Ford managed to do that and still make it handle so entertainingly is a mystery for the ages.

But if you want to know the rest of our in depth impressions of the 2015 Ford Fusion sedan then keep on reading. This might just be the perfect family sedan for you and that army of mooches (kids, dogs, spouse) who make you always drive them around. 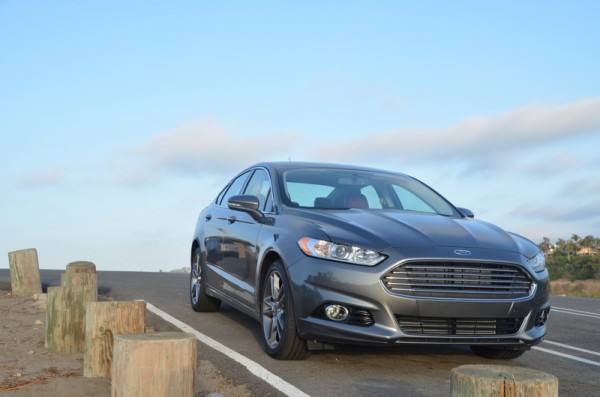 What We Loved about the 2015 Ford Fusion

What We Didn't Love about the 2015 Ford Fusion 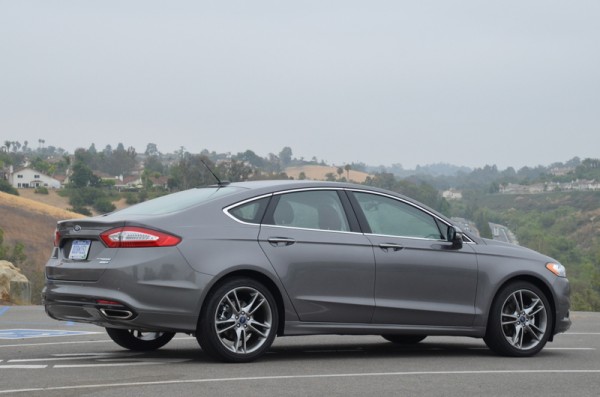 From the front of the 2015 Ford Fusion, there is more than just a small hint of Aston Martin about the design as designer Ian Callum has penned cars for both brands. It's understated yet somehow conveys menace and a touch of sportiness. Moving down along the sides of the car there is little visual frippery to take anything away from the timeless elegance of this design. The rear tail lamps may be the most generic aspect of the entire design but they do look like they were intended to be that way to maintain the classy flow of this sedan's nearly coupe-like lines.

So in that sense, we applaud Ford for clearly designing the Fusion's exterior all at one time instead of doing what many competitors apparently do and assign committees to pen the front, side, rear and three quarter views of their family sedans all while insisting they do so without ever communicating with each other. We wouldn't name names but the latest Nissan Altima quickly comes to mind as an example. 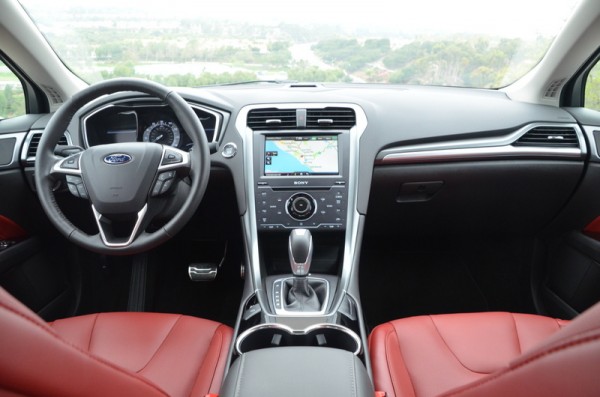 The interior of the 2015 Ford Fusion is quite roomy even if rear headroom is behind a bit on competitors thanks to its swoopy, coupe-like appearance. Thankfully rear legroom is plentiful and the shape of the rear seat is supportive for long drives as are the front buckets. Speaking of the seats, our tester featured a special red leather upholstery that may have been a $650 extra but Ford really got the shade right (not too pink, not so dark it looks purple) that it really made the whole interior appear like something from a far more expensive vehicle.

After living with the red interior we couldn't imagine just ordering our Fusion with ordinary black leather but to each their own. If you are adventurous go for the red interior. It looked great with the grey exterior paint job. Other than that, the Fusion's interior was pretty much all business but everything was solidly assembled and materials were of a high quality. Ford's interiors have come leaps and bounds in the past ten years and the Fusion's cabin looks like it could take a decade of hard abuse and come out the other side looking like a Honda. Meaning, still in one piece. 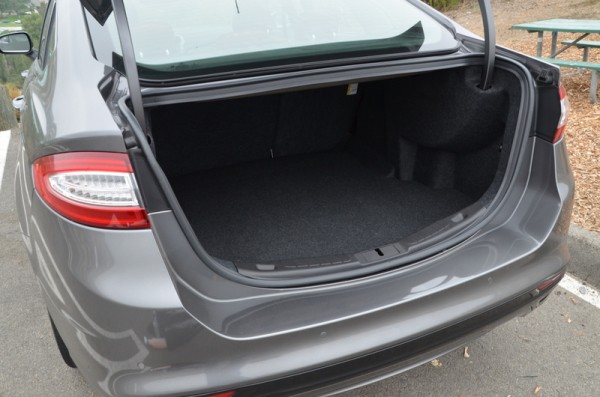 The 2015 Ford Fusion is available with all manner of advanced technology starting of course with the hybrid and plug-in hybrid powertrains available on their "eco-friendly" models. But the 2015 Fusion also is available with an array of hi-tech safety features like Blind Spot Warning, a rear cross traffic warning system that tells you if someone is not going to stop as you are backing out as well as a lane keeping assist system which vibrates the steering wheel if you are departing your lane. There is also available heated and cooled front seats with three level settings, adaptive cruise control and an automatic parallel parking assist system. We tried it, and it really can easily parallel park for you. If you trust it.

We also found the Sync and MyFordTouch systems to be totally trouble free with our only complaint being that you have to hit the touch screen in exactly the right place in each corner to change the screen to audio, navigation or the telephone function. Better touch screen control placement would help a lot or better yet, a control knob like BMW's iDrive.

All Fusion models run of regular unleaded gas and the EPA estimates the 2.0 liter EcoBoost will return 22 city/31 highway and given how much fun we had driving this speedy sedan for the week we were very happy to average 26.7 miles per gallon. If that doesn't satisfy the 1.5 liter Ecoboost can manage 25 city/37 highway, the hybrid is rated at 44 city/41 highway and the Energi model returns from its gas motor 36 miles per gallon whereas its electric car EPA score is 88 mpge combined. At least understand the Fusion Energi does have a gas engine to rely on when the batteries get depleted so no need to worry about Nissan Leaf-like range anxiety. 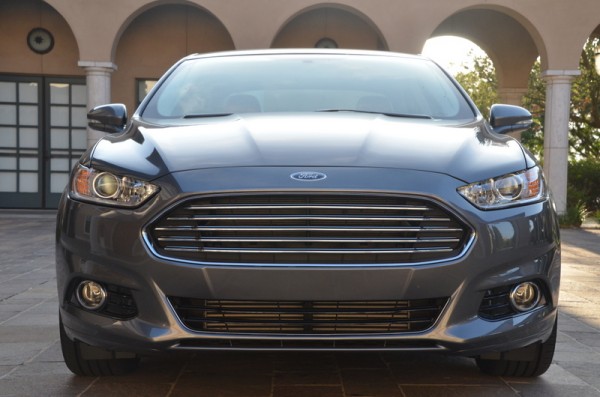 Esteemed predictors of all things reliability and quality JD Power and Associates gave the Fusion a three star out of five rating for initial quality which is an average score and nothing to see as a warning sign. As far as long term quality goes, the Fusion has been a bright spot for Ford so it gets a four star rating out of five. Honestly, the only thing that seems to vex Ford owners in these surveys is getting along with the Sync and MyFordTouch systems which are admittedly now vastly improved over their forebears.

According to the IIHS (Insurance Institute for Highway Safety) the Ford Fusion is so safe in the event of a crash that they awarded it their top honor of "Top Safety Pick Plus." The Federal Government's NHTSA body also gave the Fusion high marks awarding it Five stars out of Five overall after its testing. In addition to being safe in an accident, our tester boasted some advanced technologies to keep you from an accident as well as Ford exclusive rear passenger seatbelts which inflate out of the belt itself to reduce the risk of whiplash and hitting your head on part of the car or yourself. There was also blind spot warning, an emergency braking assist system as well as back-up sensors with a camera. 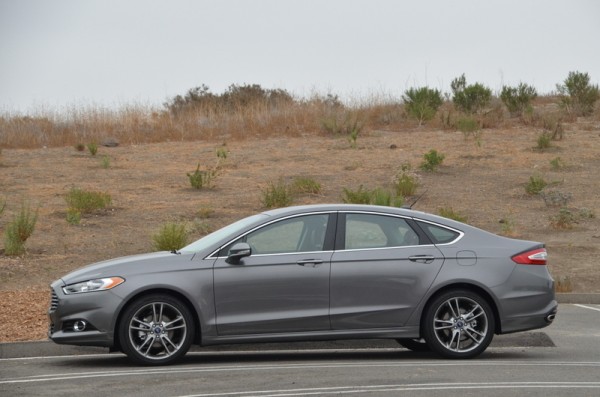 While the 1.5 liter 185 horsepower 4-cylinder engine offers up plenty of pick-up for the Fusion to manage quite nicely no matter what the situation, we happen to be the greedy types who like to have more power than we need so the deliciously lively 2.0 liter turbocharged 241 horsepower/230 pound feet of torque 4-cylinder proved just the ticket for us. (No pun intended. And no we received no speeding tickets during our test although we easily could have.) Power comes on strong from low in the rev range and the engine emits a nicely rorty growl as the revs rise. Paddle shifters on the steering wheel were fun to use when we wanted manual control over the otherwise smooth six-speed automatic gearbox.

Steering feel and suspension tuning are both Ford strong suits thanks to clear input from its European engineering arm as it feels very at home at either high freeway speeds or winding back roads. The steering doesn't dial in artificial heaviness to mask the fact that it is totally uncommunicative so you always know where the car will go when you turn the wheel. And as we have repeated ad-infinitum, the suspension is simply marvelous at absorbing road irregularities. A magic carpet ride if ever there was one.

Prices for the most basic Fusion sedans start around $22,000 and stretch to just about $40,000 for a full loaded plug-in hybrid energy model (before discounts of tax rebates). Our fully loaded 2015 Ford Fusion 2.0T Titanium all-wheel drive 2.0 liter EcoBoost model was lavishly equipped out the door at $35,000 with features like power front heated/cooled seats, navigation, 19-inch alloys, the red leather seats, exclusive rear seat belt airbags, back-up camera, automatic halogen headlamps, an awesome Sony premium audio system, Sync and and a whole lot more. For a family sedan with this much horsepower and such a superlative ride that price seems entirely reasonable to us. 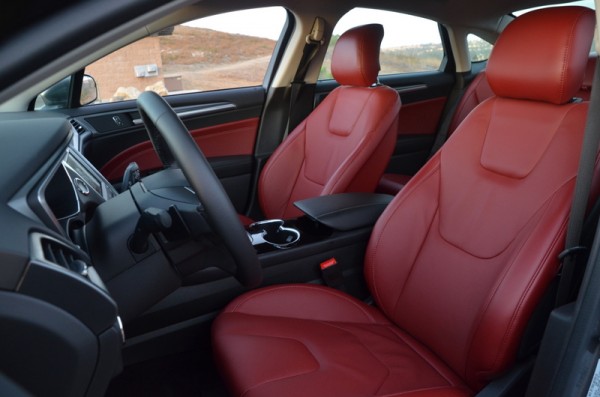 "The Final Numbers" and the Competition (67 points out of 80)

If you are looking for a stylish, roomy, extra fast family sedan and prize smooth ride comfort over all else then the 2015 Ford Fusion might just be the perfect choice for you. We put more long, pothole ridden highway miles on this graceful looking Ford sedan with the "look at me red" leather interior and it proved its mettle as the limousine of the family sedan class. For long road trips you really can't beat it. Another favorite feature was the punchy and potent 2.0 liter turbocharged 241 horsepower/230 pound feet of torque 4-cylinder felt a lot faster than those figures suggest.

The most direct competition for this particular Fusion model would have to be the 2015 Kia Optima turbo which has a 2.0 liter 274 horsepower turbocharged 4-cylinder which is similarly potent but doesn't match the Fusion's suspension refinement. Also keep in mind the 2015 Honda Accord V6 but avoid the overpriced 2015 Nissan Altima which is unrefined, pricey and has poor body control. Actually the Honda Accord is really the only family sedan to match the Fusion line-up like for like with powertrain options. To sum up, if you are interested in the 2015 Ford Fusion as always be sure to test drive something else as well but we are sure this vehicle will satisfy you in the long term should you decide to park one in your garage. 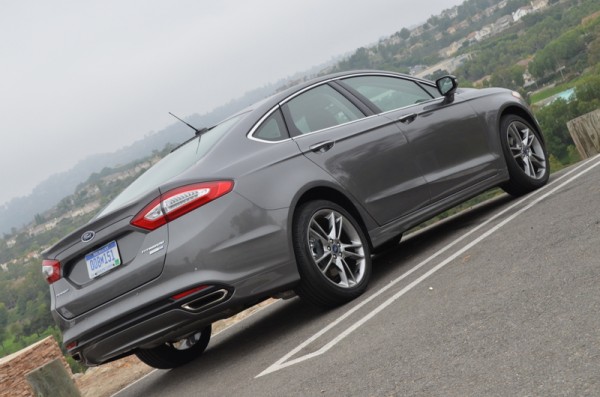