The competition in the full-size luxury segment is tough. Like Thunderdome tough. Like Chuck Norris tough. Between the BMW 7-series, the Mercedes-Benz S-class and our tester this week the 2015 Audi A8, it's a very competitive segment. But competition is good for the customer as it means each car maker will try to outdo the other with extra amenities, cutting-edge technology and refined drive performance. The Audi A8 certainly holds its own with all of these efforts and then some!

What We Loved about the Audi A8

What We Didn't Love about the Audi A8 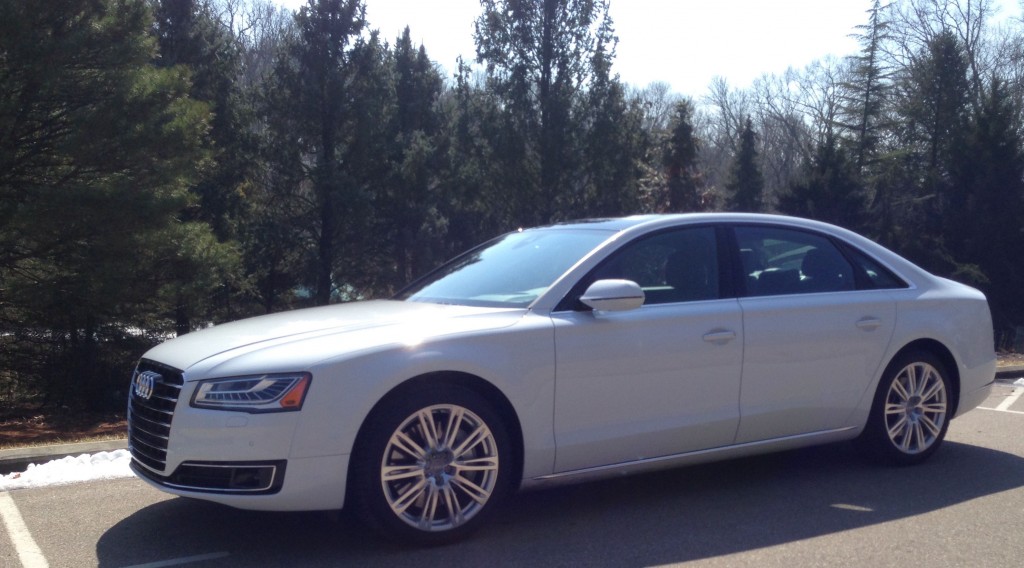 The 2015 A8 has several changes from the previous model year. The grille sports a more sculpted look. It appears that Audi wanted to mirror the BMW 7-series with this tweak, and it certainly succeeded. However, we really liked the more distinctive front end of the previous model year better. We really enjoyed the new-look LED headlights. Audi has always been ahead of the competition when it comes to lighting technology and they never disappoint, realizing the aesthetic importance, instead of just the practical purpose, lighting serves on a car. The 2015 Audi A8 is absolutely stunning at night, and this is where the flagship sedan looks best. While the A8 is a long sedan, due to its styling, it doesn't appear to be that long. There's a good balance in the overall exterior design of the A8 where the sedan is front-end dominant, where the back end is much smaller proportionally than the front end, but this adds to the combined aggressive and refined nature of the A8. 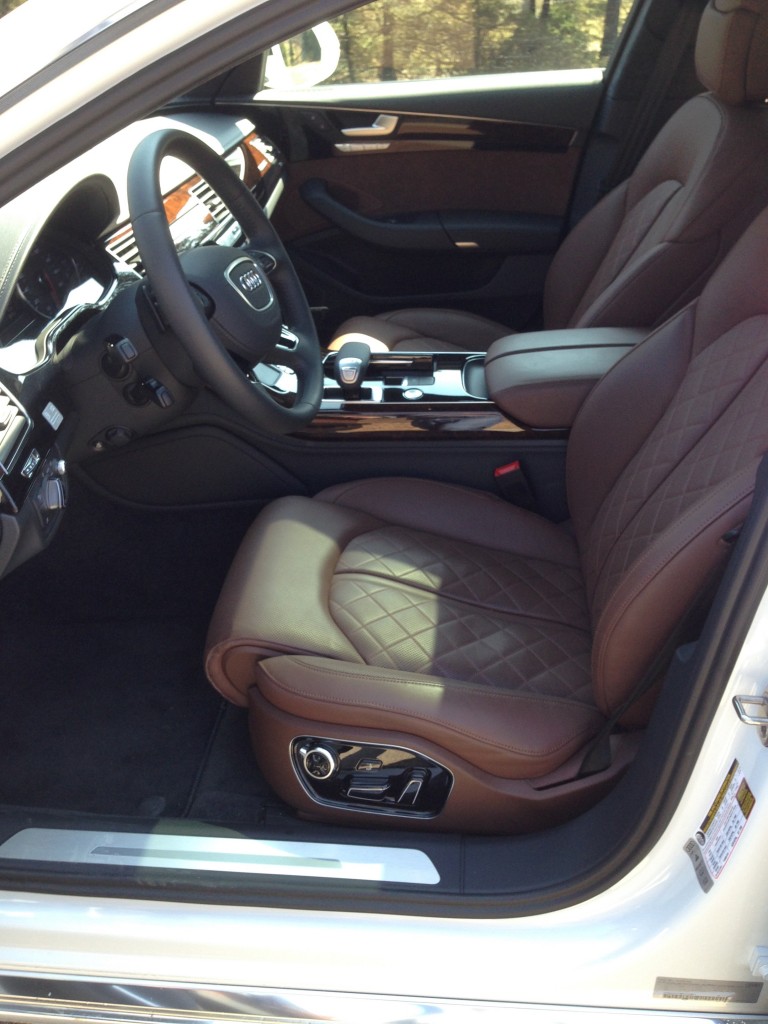 There's no doubt the A8 is aimed at a specific consumer. This luxury sedan is appealing to the business professional who may have to drive clients around, or other colleagues. While some luxury brands you're just paying for a name as a status, with the A8, you're paying for, and getting, a lot. Luxurious doesn't come close to describing the inside of the A8. It needs a new word in fact - one more superlative than luxurious. Rather than search for adjectives, let's focus on all there is to talk about with the interior, because there's a lot. Rich wood accents give a glamorous vibe to the A8. Soft leather seats in the front and the back embrace you in quiet comfort. If describing the interior is sounding like a glowing commercial for the A8, that's because there's practically nothing negative to say about the interior. It is simply at the top of the segment, right down to the heated/cooled massaging front seats. There is an almost equal balance of space in the front and back. There's 37.2 inches of headroom in the front and 38.1 inches in the back seat. The A8's back seat is big enough, and comfortable enough to accommodate up to three full-size passengers. Audis are known for offering a quiet ride, and the A8 delivers. A quiet, calm balanced ride awaits passengers inside, making it perfect for conducting business and schmoozing clients. 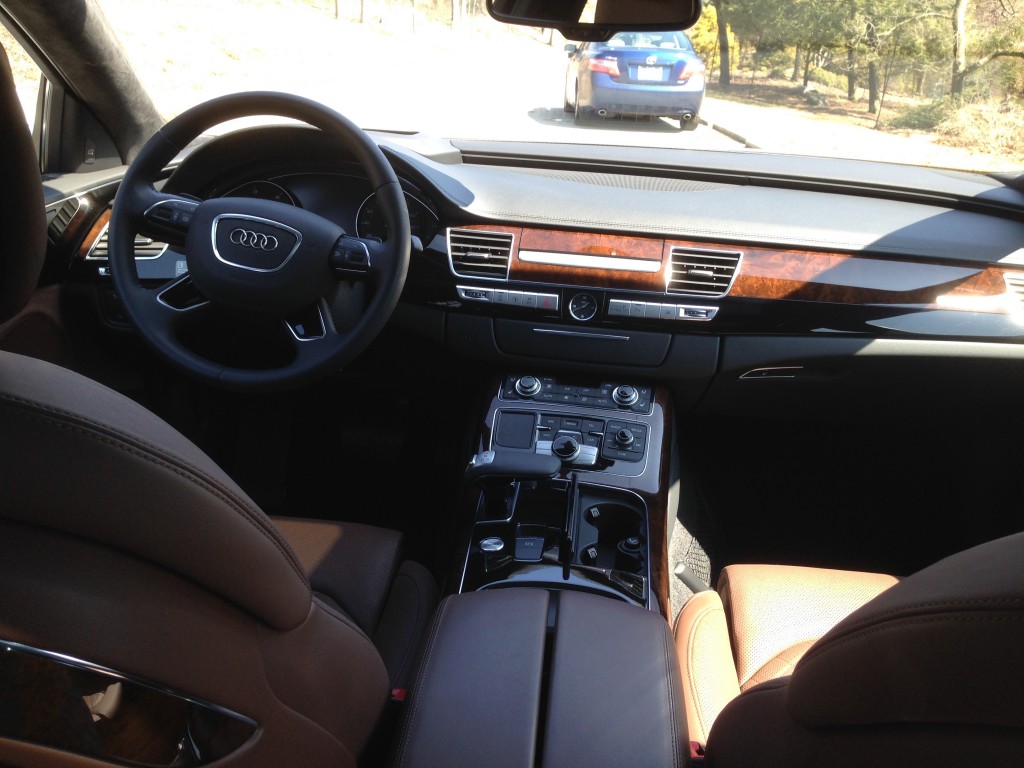 Audi is always a leader in new car technology. In fact, sometimes, we are critical of them for having too much technology in their vehicles. They sometimes over engineer things and introduce technology that is clumsy and is not intuitive. There's a little bit of that in the A8. We love the Audi Connect system that integrates with Google Earth. It's the neatest navigation on the market. It's a talking point and has a high "wow" factor. However, managing it, along with the other aspects of the infotainment system can be clumsy and confusing. It also requires a great deal of dexterity and hands-off-the-wheel manipulation thanks to the MMI interface. Based on a very touchy pad, the technology is amazing, but requires a lot of practice. Once you get used to it, you grow to appreciate the truly amazing technology throughout. Enjoy real-time access to weather, sports news, updated gas prices and other online information, all through a built-in WIFI system that is available to all passengers.

Audi offers the A8 in both a gasoline and a clean diesel option. We drove the TDI (clean diesel) version which is the most fuel efficient version of the A8. Audi goes as far as to claim that the A8 TDI (diesel) is the most fuel-efficient sedan in the segment. EPA estimates for the TDI is 24 city and 36 highway. In a week's worth of heavy-footed driving we averaged 29 mpg. There's a lot of disparity between the diesel and gasoline engines in regards to fuel economy. EPA estimates for the 3.0-liter gasoline engine is 19 city and 29 highway. If fuel economy is something of vital importance, the diesel version is the way to go, and what you lose in horsepower, you gain in torque and have fewer trips to gas station.

The Audi A8 has done well in the past in consumer quality ratings. The fit and finish on this sedan are absolutely incredible so it'd be hard to imagine there being too much disappointment or issues regarding overall car quality. Due to the heavy technology throughout this sedan, repairs and general maintenance could be more costly. But if you can afford an $80,000+ vehicle, that's probably not as much of a concern.

Audi goes high tech with their safety. Sure there's all the airbags and sensors and gauges that are expected, but Audi offers several features found only on high-dollar vehicles like the A8. Added on safety options included a heads up display that offers the driver ease of viewing vehicle speed, navigation information and even a night vision system that helps detect people and animals on the road. Additionally, our tester came with the Driver Assist Package (at a cost of $2,250) which includes lane assistance notifying the driver if they sway over a line, side assist, which notifies the driver of the presence of another vehicle, adaptive cruise control and an alert system that will apply the brakes to help prevent a collision. We especially found the Night Vision assistant incredibly handy and appreciated that technology. After all, who wants to run their A8 into a deer at night? These safety features really do bring amazing value to the A8, but for a high-ticket sedan, we'd love to see at least some of these (like lane assist and adaptive cruise control) as standard options instead of adding more to the final price tag. 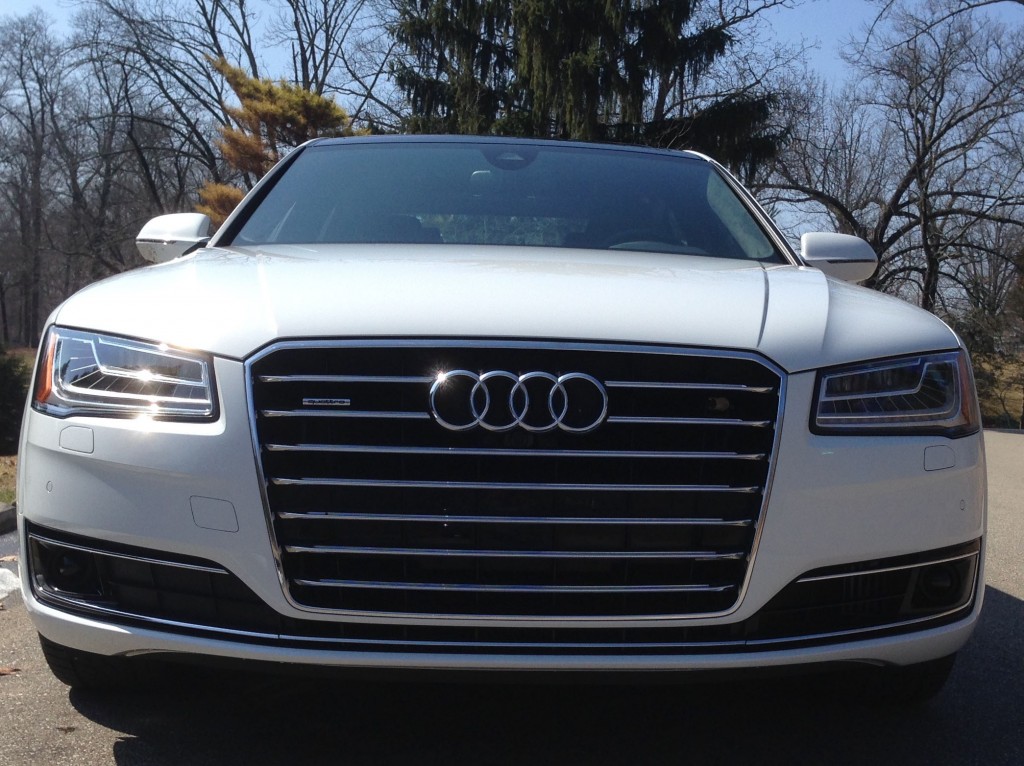 The A8 comes V6 and V8 engines, as well as the gasoline and diesel options. Our tester was the 3.0-liter TDI engine. It made a rather pedestrian 240 horsepower. However thanks to the turbo-injected diesel engine, it makes an amazing 428 lb./ft. of torque. So this is an example of not letting the slim horsepower number convince you to buy the bigger V8 engine. The TDI A8 is plenty powerful. Sure the gasoline V6 makes 333 hip, but it makes significantly less torque. It's not always about the horsepower numbers. Rather, it's about how the car works together with other components. An 8-speed automatic transmission is the only transmission option, but it seems to work brilliantly with the turbo diesel engine. It handles the torque output well and flings the shifts around with ease and without any lag. New for this model year is an electromechanical power steering system. This provides unbelievable agility (for such a big sedan) and gives the driver an incredible amount of feel that the previous A8 didn't have. Audi claims it also is a contributing factor to the A8's overall fuel economy improvement.

Our tester had a base price of $85,100. The V6 gasoline version can be had for slightly less than that. This makes the A8 on the higher end of the spectrum when compared to the BMW 7-series which can start in the mid $70s. Our tester came with lots of extra options (most of which we've written about and that you'd likely want) that took our final price tag to $98,575. It's this type of optioning that is common amongst European vehicles, that frustrates us about the A8. Options that add to the greatness of this sedan come at a hefty price and almost prices it out of the segment.

The Audi A8 is unquestionably a great sedan. Audi's flagship is downright special. When compared to its tough competition, it flashes points of brilliance and between fuel economy, all-wheel drive, and cutting edge technology. The A8 is a special car in a special segment. It stands out in the segment in many ways and continues to evolve, adapt and improve. We look forward to seeing what Audi will do for the next generation A8.

Audi A8 Cars for Sale