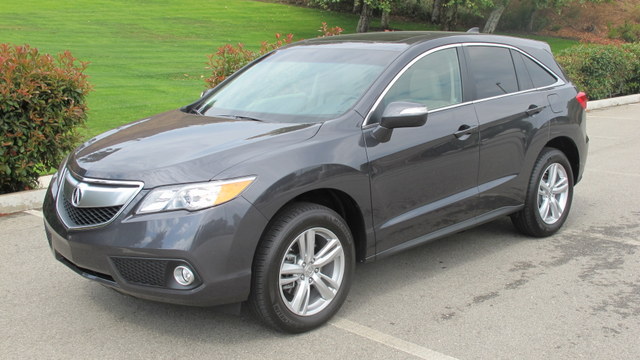 Overview (Final Score after 8 Categories: B+)

Not much is new with the RDX for the 2015 model year and to our way of thinking if it wasn't broke in the first place then why on Earth should Acura try and fix it? We frankly had quite a time coming up with three complaints about this SUV so happy were we with its performance, roominess, handling and style especially in our tester's burgundy exterior hue. Seriously consider buying your 2015 Acura RDX in that color because it makes the SUV look far more expensive than it really is. Or as much as a comparably equipped Lexus RX, Cadillac SRX, Audi Q5, Volvo X660 or BMW X3 would be that's for sure.

But is the 2015 Acura RDX as good as those exemplary luxury compact SUVs what with an onslaught of ever more capable newcomers like the Lincoln MKC, Audi Q3, pricey Porsche Macan and Lexus NX to name just a few? Well, while the new Porsche Macan may be the choice of sports car drivers there are still many more buyers out there who value things like interior room, a logical dash layout (which the Macan lacks) as well as a somewhat sensible price tag. Come one, people who buy these kinds of SUVs most likely still have to work for a living. They will not be cross-shopped with the upcoming Bentley or Rolls Royce SUVs.

If you are still reeling from the notion that both Bentley and Rolls Royce are developing luxury SUVs then hopefully now you can see that the concept of a "regular grade" luxury SUV is somewhat sensible. And few come as sensibly priced as the 2015 Acura RDX while striking a truly deft balance between overall luxuriousness and avoiding self-parody. It may not be optionally available covered in Swarovski crystals but we figure that market will be filled by Mercedes when they turn one of their SUVs into a Maybach.

What We Loved about the 2015 Acura RDX

What We Didn't Love About the 2015 Acura RDX 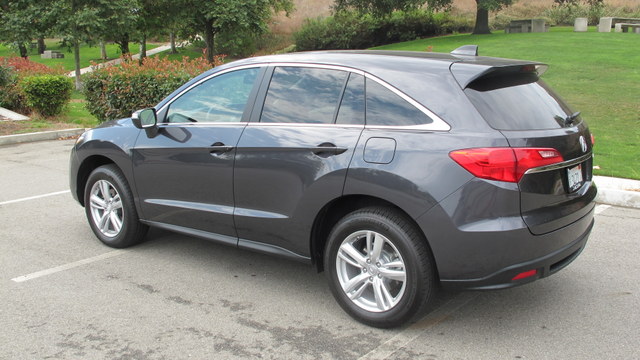 Our 2015 Acura RDX with Tech Package test model looks positively resplendent in this deep and rich red color that this luxury automaker refers to as "Basque Red Pearl Two." Apparently there was a "Basque Red Pearl One" but as opposed to the rule with most films, we are pretty sure that this sequel is better than the original. It truly is a gorgeous color but do note it is only available with the light colored parchment interior so if you must have a black interior consider another one of the available seven exterior hues.

Stylistically, we see the current RDX as the "Son of MDX," this Acura's larger seven passenger big brother which shares many of the same design elements. Thankfully, both are not only classically handsome and elegant looking but they manage the difficult trick of looking good from all angles. Some luxury SUVs appear to have been styled by different committees for the front, the back and the sides none of whom ever spoke during the design process. We may, or may not be talking about the BMW X3 here.

Sure, there are some competitors like the Cadillac SRX which do take more stylistic risks than that the RDX but few do them as successfully as that Cadillac. So we think the 2015 Acura RDX really did strike a nice balance between style, sophistication and elegance with its latest compact luxury SUV. 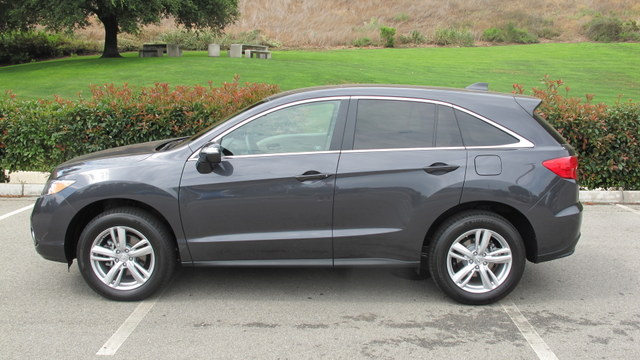 If you are well acquainted with the cabins of any other Acura models then you should feel quickly right at home in the 2015 RDX. Although the RDX shares some commonality with Honda's CR-V, it is in its interior that this baby Acura SUV manages to shine through brightest as the truly more glamorous and luxury filled variant. The leather is of such high quality it feels like ten years will hardly age it, although we would question choosing the tan interior as it is a very light hue which shows dirt easily. Thankfully, however, we found the dash plastics, leather and carpets all easy to clean after a long day getting dirty out in the countryside.

Okay, we didn't take the RDX off-roading or anything but even with a dog aboard the 2015 Acura RDX handled all of the abuse we could toss its way without blinking an eye. The cargo area holds 26.1 cubic feet behind the second row of seats which grows to 76.9 cubic feet once you pull the brilliantly placed release levers accessible through the rear hatch on the walls of the cargo hold. No need to make that trip back to the side doors and then back to the rear hatch door once you are done folding the seats. Yes, it may be lazy not to want to walk those few extra feet but isn't being lazy truly the ultimate luxury? 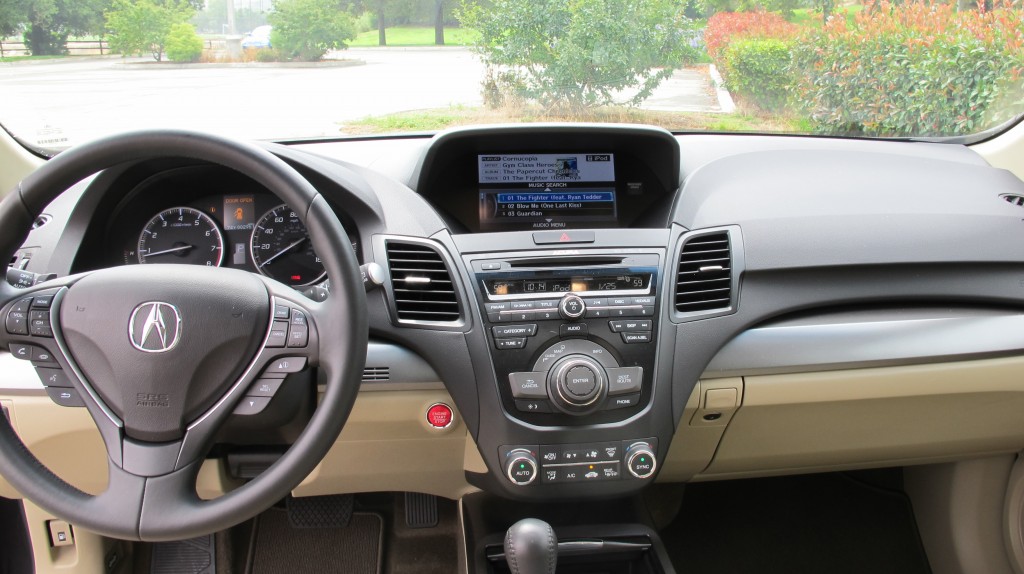 Of all the automakers whose Bluetooth connectivity we have tested, Acura and parent company Honda easily have one of the quickest, if not the quickest smart phone hook-ups in the industry. It's a simple process and never have we experienced a hiccup with an Acura syncing up to one of our smartphones. Thanks to an easy to use center dash mounted knob, all of your phone functions from missed calls to your phonebook are within easy reach. This knob also controls navigation, audio and other related infotainment functions via the high mounted 8-inch screen.

Standard with every RDX is a very nice 7-speaker Acura Premium audio system with the usual USB/i-pod integration and Bluetooth music streaming along with Sirius/XM and a CD player. You know, in case you still have any. But being the audiophiles that we are, we cannot recommend more highly the Acura/ELS audio system upgrade that comes with the Tech Package upgrade and was developed with Grammy Award winning sound engineer Elliot Shiner. It includes 10-surround sound speakers, Dolby pro-logic, an 8-inch subwoofer as well as a 15 GB built in hard drive to store your music so you can leave your i-Pod at home.

Also included is Acura's amazing song by voice system which allows you to use the voice commands to tell the car to play a song from your i-Pod or hard drive. So, if you are in the mood for some Amy Winehouse just press the voice activation button and say, "Play track Rehab" and that song will start playing without your having to scroll through your songs manually. Other notable gadgets include the ability to have your text messages read back to you as you are driving and a scenic drive submenu in the navigator which can direct you to the closest scenic drive no matter where you are in the United States. Pretty cool for road trips, huh?

As with most premium nameplates, Acura recommends buyers of the 2015 Acura RDX use premium unleaded when filling up the 18 gallon fuel tank so if that is an issue we recommend you try downloading an app for your smartphone that can locate the least expensive premium unleaded near you. We recommend downloading "Waze" which not only finds you the best gas prices near you but is also a navigation system which notifies you if other uses spotted highway patrol officers or construction ahead of you. Our 2015 Acura RDX with All-wheel drive was EPA fuel economy rates at 19 city/27 highway and over the course of a week we averaged 23.4 miles per gallon. 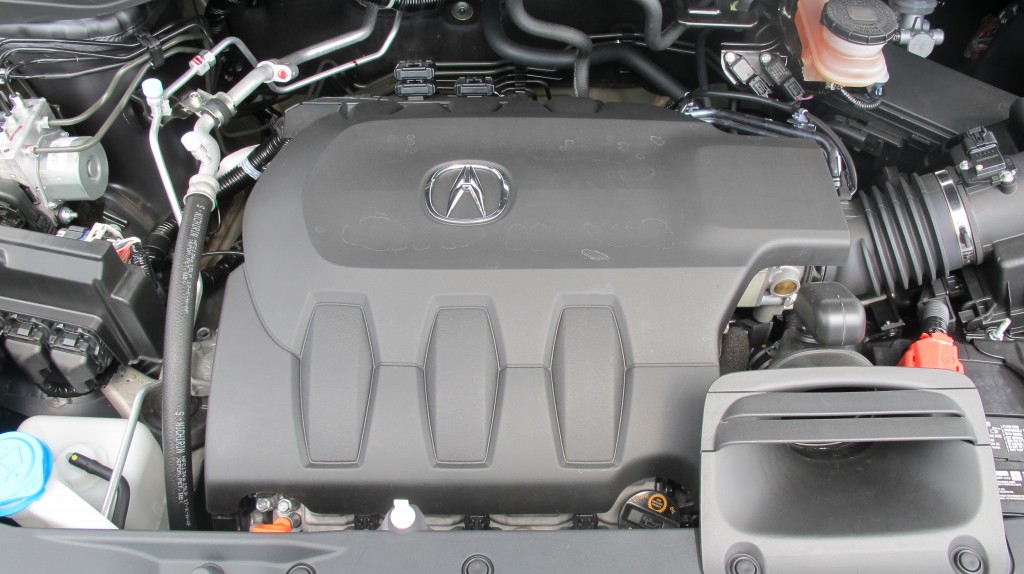 Even though the redesign of the latest Acura MDX for the 2014 model year saw some early build hiccups that are truly unusual for the brand, the RDX which was redesigned about a year before suffered no issues early on in its life and has proven quite reliable. Various quality and satisfaction surveys from the likes of J.D. Power and Associates which awarded the RDX with an overall score of 4 out of 5 stars for overall reliability. That's impressive given the amount of tech included with this SUV.

Although the 2015 Acura RDX has yet to undergo the difficult IIHS small front overlap crash test meant to simulate impact with something like a tree or pole at 40 miles per hour, the luxury SUV proved to have a very solid structure in all other tests managing to score top ranks of "good" in all areas. This included front off-set impact, side impact, rollover roof-strength and passenger whiplash protection. The only thing the IIHS wished the RDX had more of were active safety warning systems like the Lane Alert camera found on even the Honda Accord, Civic and Fit as well as features like Blind Spot Warning and Impact alert warning. 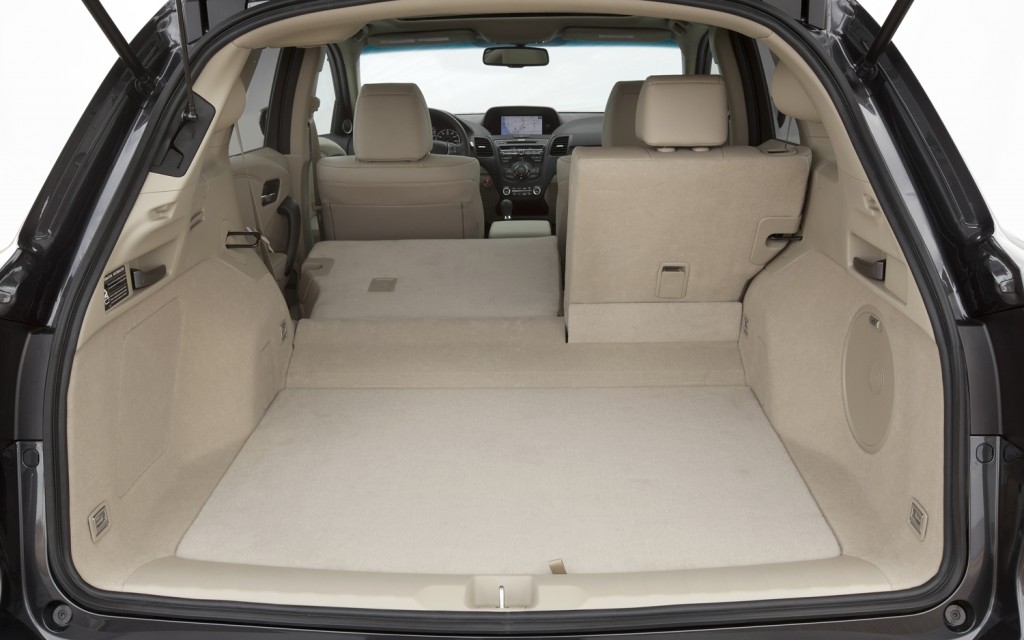 The last generation RDX came with a highly unusual for this class 2.3 liter turbocharger 4-cylinder engine that, while peppy, wasn't the last word in refinement or even fuel efficiency. So when Acura redesigned the Acura RDX they instead chose to shoehorn the corporate 3.5 liter V6 which puts out 273 horsepower and 251 lb. feet of torque that proves more than sufficient to make this feel a bit like a luxury SUV hot rod. What also doesn't hurt is some very responsive steering and a chassis that thrives on corners that would leave some competitors slamming on the brakes.

Standard on every 2015 Acura RDX is a telepathic six-speed automatic which helps our tester return an EPA estimated 19 city/27 highway on recommended premium unleaded gasoline. While our tester did come with all-wheel drive it is not like Acura's much vaunted SH-AWD system but rather keeps the RDX mainly in front drive mode and only sends power to the rears should you need extra traction in bad weather.

The SH-AWD system, on the other hand, constantly monitors power to all four wheels and can send extra power to individual wheels as needs arise. This makes SH-AWD a boon in bad weather and in good in that it noticeably helps improve handling. The larger and pricier MDX offers SH-AWD as an option and it is part of what makes that SUV feel a bit sportier than even its smaller sibling during spirited driving.

The only other option is to add what we think is an essential—the Tech Package which brought our all-wheel drive equipped variant up to just about $40,000 fully loaded. Adding the Tech Package nets you an easy to use and intuitive navigation system with traffic, weather, a restaurant guide as well as a great driving roads guide, the Acura/ELS premium surround sound system with 10 speakers and hard drive song storage, automatic HID (High Intensity Discharge) headlamps, a power rear tailgate and much more. Go out. Try to beat that price with the same features. You won't.

Thanks to the sporty car feel delivered by its 273 horsepower 3.5 liter V6 which can emit a very un-SUV like howl as well as its comparatively very affordable pricing, the 2015 Acura RDX leaves us with few reasons not to recommend it. The RDX may not flaunt your wealth as you drive down your street but not everyone is looking for that from a luxury vehicle. We would hate to call Acura's approach here a more toned down "old money" feel as opposed to the "new money" status symbol exemplified by the BMW X3 and Lexus RX which both do nothing more than the RDX yet cost at least ten grand more. Is that propeller or little "L" logo on the hood that important? 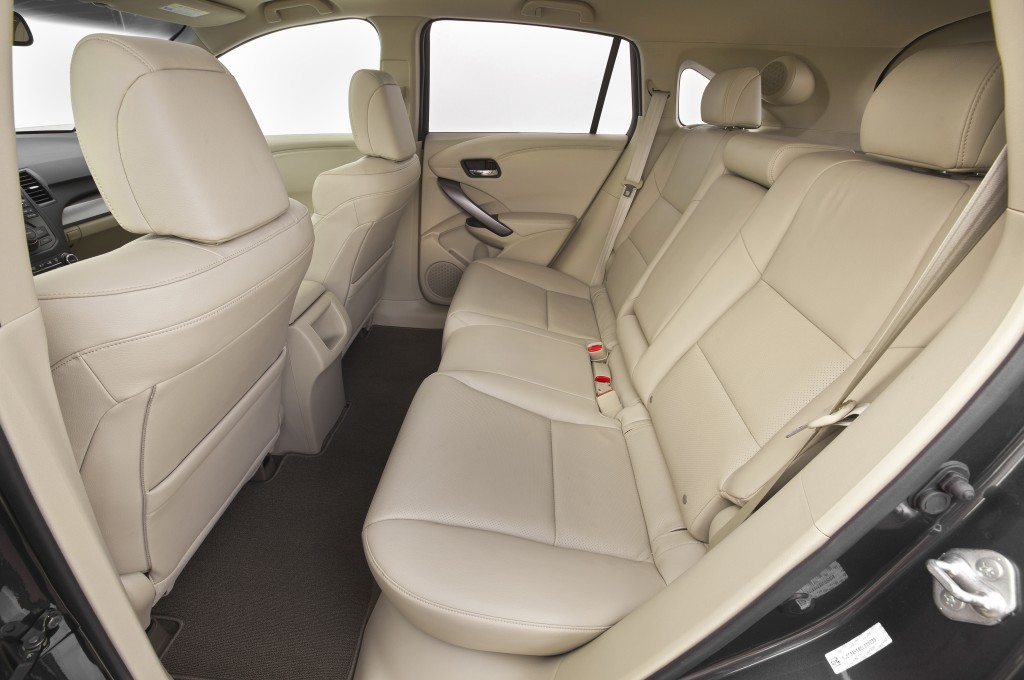