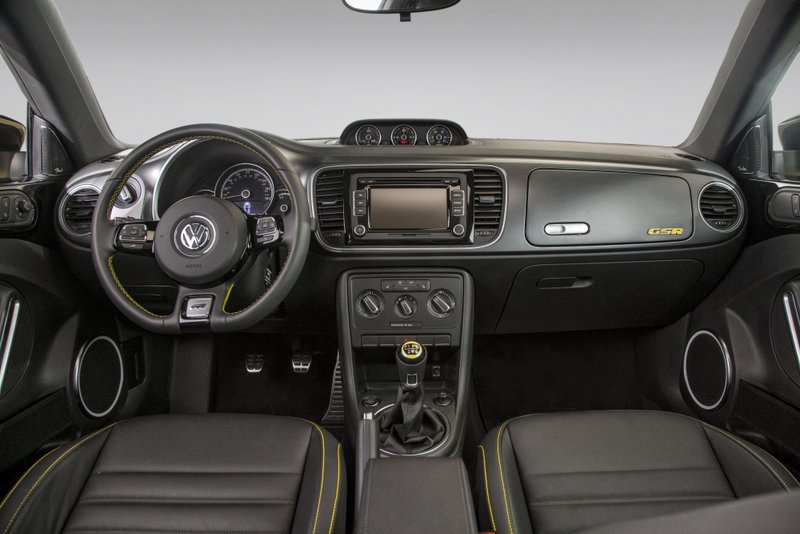 Once the domain of cute sorority girls everywhere, the 2014 VOLKSWAGEN Beetle which was recently redesigned with a more muscular and masculine edge to its once adorably squishy styling is turning into a more focused performance driving machine with each passing year. This model year even sees the end of the last vestige of poor performing New Beetles of year's past—the 2.5 liter 5-cylinder base engine that has its design roots from the long since forgotten Audi Fox engine which was popular around the time the Bee Gee's were at their musical peak.

This new model year also sees the addition of a GSR edition which is limited to less than 2,000 units for the United States market and the renaming wholesale of all 2.0 liter turbocharged Beetle models which are now assigned either the R-Line or GSR designation. You can tell that you bought the GSR thanks to the huge rear spoiler, bright yellow paint job, black racing stripes and yellow trim accents in the interior. The 2014 VOLKSWAGEN Beetle GSR is definitely for the extroverted driver looking to get noticed while they are having a blast driving one over the top turbo sport coupe.

Also available alongside the sweet revving 2.0 liter gas turbo is a 2.0 liter 140 horsepower/236 lb. feet of torque diesel TDI variant with the base 2.5 liter 170 horsepower/170 lb. feet of torque 5-cylinder hanging around for a short time until VOLKSWAGEN shoehorns it's amazing new 1.8 liter turbocharged 4-cylinder base engine under this rolling style statement's long and sloping hood. We aren't fans of the performance, efficiency or refinement of the 2.5 liter motor and as we recently were fortunate to not only test VOLKSWAGEN's new 1.8 turbo as well as the R-Line, TDI and GSR at a drive event in Napa, California—we can tell you that this new engine will truly round out the Beetle family so that all models offer buyers something unique ad appealing. 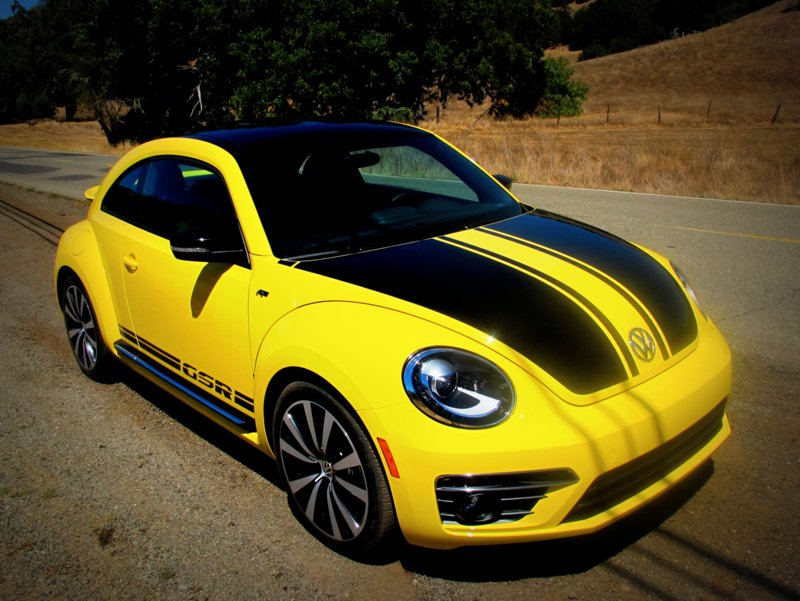 While VOLKSWAGEN didn't have an exact timetable for when the Beetle would be getting the 1.8 liter 170 horsepower/184 lb. feet of torque turbocharged 4-cylinder as its base powerplant (the Jetta and Passat will get the new engine first), if you do not plan on purchasing the fuel efficient diesel TDI or the sportiest models with a 2.0 liter 210 horsepower/207 lb. feet of torque turbocharged 4-cylinder, we cannot recommend more highly that you sit on your hands and wait. Where the 5-cylinder moans and wails when you need power, the 1.8 liter motor delivers its power in a quick and deliciously linear manner with a 38 mile per gallon highway rating just the icing on the cake.

For 2014 VOLKSWAGEN is also offering a Fender Special edition of the Beetle with either the 2.5 liter or 2.0 liter turbo engines which boasts unique dashboard trim, Fender badging, chrome wheels and a 400 watt 9-speaker audio system designed for the car by, you guessed it, Fender guitars. The Fender special edition, like the 2.5, TDI and R-Line models is available in either coupe or convertible form. Oh yes, not only do you have to choose from this many engines but you also have to decide ragtop or hard top? Decisions, Decisions.

Love it or hate it, the new and more muscular styling of the 2014 VOLKSWAGEN Beetle is not for everybody and in that lies its inherent appeal. This is a car for those who want to make a visual style statement with their choice of new car and while we aren't exactly sure what a 2014 Beetle would tell people about you, it would at the very least announce your arrival. Especially if you buy the GSR model which only comes in bee sting yellow.

Personally, we found the more squared off edges of this "newer" Beetle more appealing that the model generation that came before as it was all soft curves and rather feminine exterior lines. That was even before you saw the interior of the last "New Beetle" with its flower vase which forever damned it to the ranks of a "chick car." Now, we think that giving cars a gender assignment is rather dumb but the 2014 VOLKSWAGEN Beetle will no doubt prove appealing as a purchase to both women and men. This car is just too fun to drive and look at for it not to be driven by everyone and anyone. 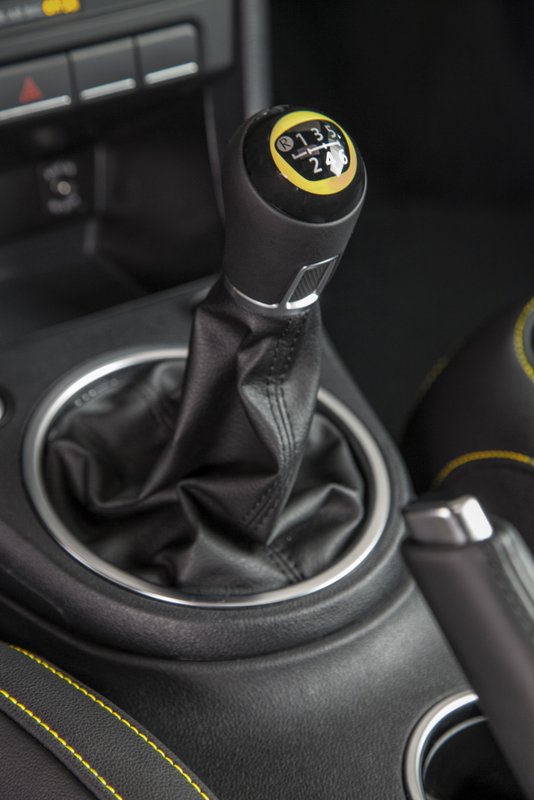 Again, we thank VOLKSWAGEN for ditching the flower vase on the dashboard when they redesigned this version of the Beetle. Now the 2014 Beetle has a straightforward, no-nonsense and high quality dashboard that is upright with clearly marked gauges much like the first rear-engine Beetle. The doors and sloping roofline both also work together to make the occupants of a 2014 Beetle feel snug and protected from the giant SUVs outside. To some the Beetle may feel less than airy inside the cabin but if so buy either the convertible or the GSR which comes with a glass roof. Both are excellent ways to bring extra light into your Beetle's cabin.

As you would expect with any VOLKSWAGEN, interior materials quality is excellent and definitely a step above what competitors at this price would provide their customers. The two front seats offer plenty of room for two large adults including their shoulders and elbows. The back seat passengers are not quite so lucky and had better be children. Or packages. Perhaps a small dog.

Our behind the wheel time with the 2014 VOLKSWAGEN Beetle has been limited to a sport tuned GSR model, a Beetle R-Spec Convertible with the DSG automatic and the same motor as the GSR as well as a coupe with the TDI motor and DSG double clutch automatic. We have not driven one with the base 2.5 liter 170 horsepower 5-cylinder but we have yet to find that engine very thrilling in any application. Go for it only if you can't stretch your budget to a TDI diesel or a turbo variant.

Let's start at the top with the 2014 VOLKSWAGEN Beetle GSR with its bright yellow paint and black racing stripes which boasted a slick and smooth shifting six-speed manual gearbox. The GSR comes with all the Beetle coupe's available bells and whistles like a sunroof which really brightens up the cabin, navigation and premium audio for just under thirty grand. Then VOLKSWAGEN added an enormous rear spoiler to the back, additional body cladding, xenon headlamps, GSR specific dash trim enhancements as well as yellow stitching on the sport seats and shift knob. Overall, the car looks as over the top as it drives.

Pop the 2014 VOLKSWAGEN Beetle GSR's gearbox into first and you will notice how light, smooth and easy to manipulate that the clutch pedal is even when in stop and go traffic. But find some open road and unleash the full fury of the 2.0 liter 210 horsepower/207 lb. feet of torque turbocharged and direct injected 4-cylinder will rocket you towards the horizon whether you are ready or not. The GSR can be had with VOLKSWAGEN's excellent DSG automatic transmission (the only available option) but we think the self shifter suits the GSR's bespoke and sporty nature much better.

Compared to our piloting the 2014 VOLKSWAGEN Beetle convertible with DSG that we piloted earlier, the DSG felt much more like a competitor for the Fiat 500 Abarth or Mini Cooper S meaning it did a fine job of imitating sport coupe greats. Admittedly, the Beetle is most fun and feels most composed when driven at up to 8/10's of its potential since the pliant suspension does allow some scary pitching sensations if you hit a crest in the road at an illegal speed. Not that we did that, of course. But do understand that you pay the price in a Mini or Abarth and that price is long distance ride comfort—something at which the Beetle excels even in convertible form thanks to the fabric top's solid constrtuction.

As far as safety goes, the Beetle performs very well in crash tests with the IIHS naming it a "Top Safety Pick." Honestly our only niggle with driving any of the Beetle 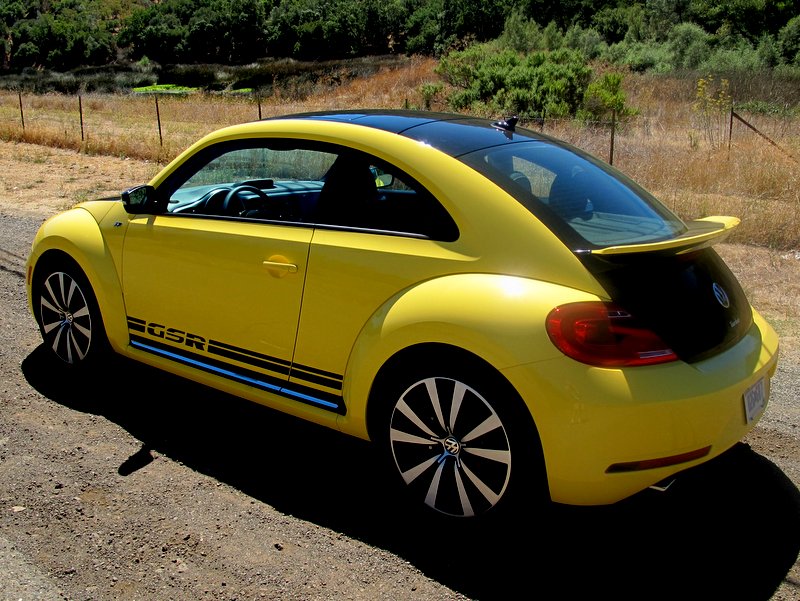 models was with the convertible with the top up as it really is possible to lose planet killing asteroids in your blind spot. So then we recommend you just leave the top down and only put it up in case of torrential downpour or a blizzard.

So finally, how do we think the 2.0 liter 140 horsepower/236 lb. feet of torque turbocharged diesel 4-cylinder works in the Beetle? Well, much like in the Golf, Jetta and Passat this motor offers plenty of off the line urge with the double clutch automatic and only gives off the slightest hint of diesel clatter and no odor or smoke. It is actually a good match for the gas turbo engine only you can see up to 50 miles per gallon realistically in a TDI VOLKSWAGEN on motorway trips. Not bad for a "fun car."

There really is no competition for the VOLKSWAGEN Beetle Convertible with the diesel engine which in real world driving is known to be capable of easily beating its EPA fuel economy estimates of 28 city/41 highway. Sure, a Miata is fuel efficient but not anywhere near that efficient plus it doesn't have a back seat. Admittedly, the Beetle Convertible's back seat is best left to children or pets but it's nice to have it anyway. Even just as a shelf to store the shopping you couldn't cram into the trunk.

As you would imagine, the 2014 VOLKSWAGEN Beetle coupe is the more rational purchase with prices starting right at $20,000 and moving  up to about $24,000 to gain entrance into models with the TDI or 2.0 liter turbo engine that bring us finally to the GSR and fully loaded R-Line model with navigation, leather and more which still sneaks in at just $29,995. Trust us, that's a very good deal for the level of performance that the Beetle GSR and R-Line are both capable of, especially when equipped with the standard 6-speed manual gearbox.

It may not be as slick as the unit you find in a Mini Cooper S but the 2014 VOLKSWAGEN Beetle GSR's transmission still has no problem accessing the 2.0 liter turbo's devilish and hooligan-like nature. You wouldn't think a yellow car could be a bad influence on you but the Beetle GSR positively goads you into speeding and attempting cornering maneuvers that you ordinarily would not. Try that excuse with a traffic officer who pulls you over, however, and we doubt that you will get any 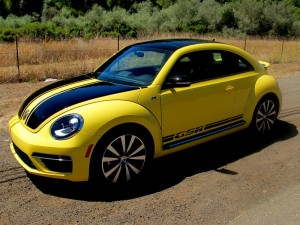 Our first Beetle tester was a convertible R-line model with the 2.0 liter turbocharged motor and while we loved driving in the open air we simply refused to back the car in reverse with the top up. Seriously VOLKSWAGEN, this convertible top has a blind spot so huge that it could hide the Great Wall of Chine. Ah, what we give up to look fashionable. Later, we were fortunate enough to put a 2014 VOLKSWAGEN Beetle GSR through its paces on one of Napa, California's most challenging and picturesque winding back roads. In that setting the GSR proved its mettle thanks to a smooth 6-speed manual, tautly grounded suspension tuning and yellow paint job that we believe in fact makes the GSR all that much faster.