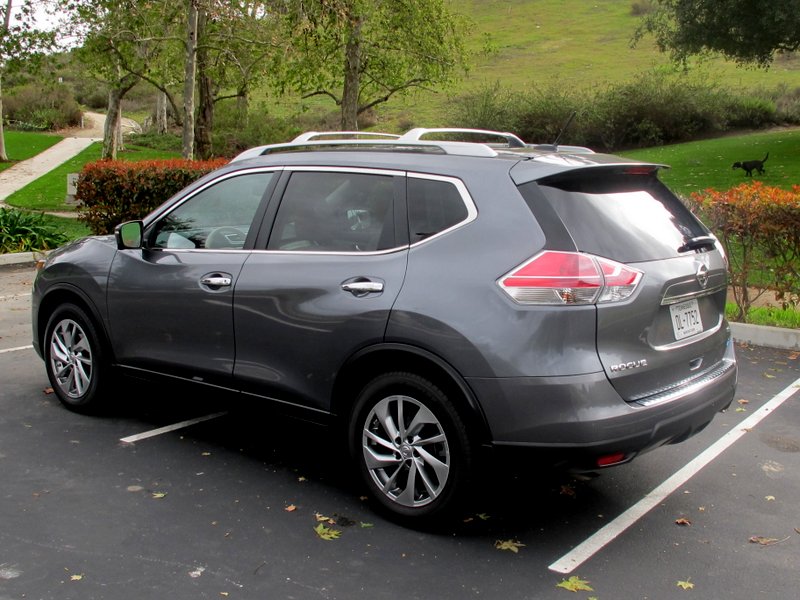 To sum it up in the most succinct and easy to digest way possible here is our basic summation of the all-new 2014 Nissan Rogue compact family SUV—it could easily qualify for SUV of the year just by dint of being a total and overall improvement over last year's model whose least offensive sins were blind spots capable of hiding jetliners and an exterior design that made it look like a Murano with a glandular condition which never let it outgrow its bulbous baby fat.

We aren't sure how Nissan got back a bit of its mojo with the new 2014 Nissan Rogue but as a matter of fact the only thing we care about is that we never have to drive the old one ever again. This new version is smooth and refined to drive, luxurious feeling on the inside without a huge price hike and can be ordered in a wide array of versions going so far as to offer a third row option best left to kids. But still, kids love those third rows of seats. And Nissan, in their new redesign, was kind enough to even design air vents leading to passengers all the way in the back should your model be so equipped. How thoughtful! And one last note, we won't argue with you for just buying the Rogue based on looks alone.

What We Loved about the 2014 Nissan Rogue

What We Didn't Love About the 2014 Nissan Rogue 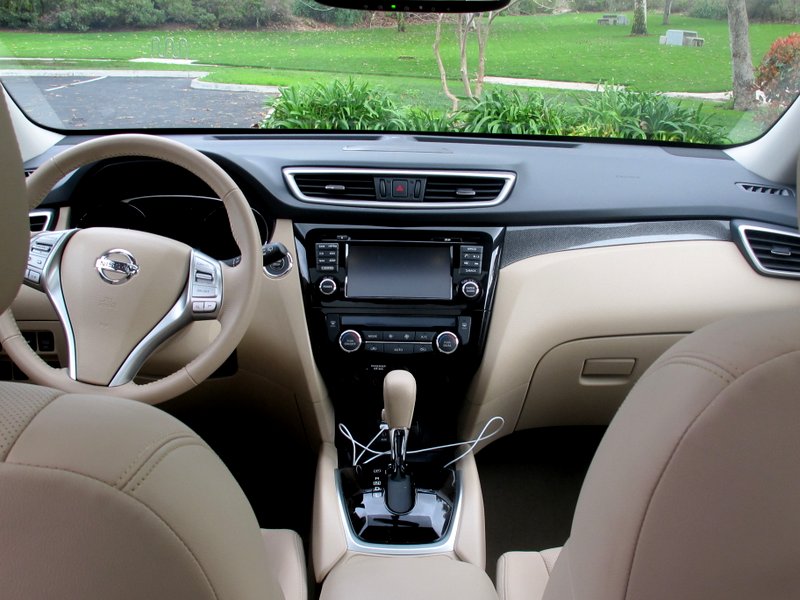 Now, we can't say that any compact family SUV exactly gets our blood boiling with desire when it comes to exterior style and design but as far as this class of vehicle goes the Rogue is at the top of its league. At the very least, it surely is better looking than the awkwardly pointy Toyota RAV4 which seems to have been designed by six teams which never spoke to each other. The Rogue, on the other hand, echoes not only the svelte lines of big brother Pathfinder but it also manages to look cohesive, masculine and pricier than it really is. That's not an easy feat to pull off.

And lastly, kudos to Nissan for taking one of the dorkiest looking SUVs on sale (last year's Rogue) and turning it as if by magic into a family transport module which could almost be described as sexy. And way, way sexier than any minivan will ever hope to be in this or any lifetime.

From the choice of upscale leather inside the top of the line SL version of the Rogue that we tested, to the fit and finish of the interior trim pieces all the way down to the uniquely stylistic shapes of the air vents in the dashboard—it's clear that the 2014 Nissan Rogue is trying to play an all new ball game. Last year the Rogue's interior was a mishmash of hard plastics, cheap feeling and looking dials and controls and some of the least convincing leather to such a degree we conjectured at one time that it was perhaps a by-product of an Armadillo and not a cow.

Another issue with last year's Rogue was the fact that it had terrible blind spots so much so that it was easy to miss people walking in parking lots and cars behind you on the freeway. Now, not only is the new Rogue's design free of such issues mostly but the compact family SUV also comes with available back-up camera and blind-spot warning systems to keep you from having to guess what's around you. Add in seats that properly support over long hauls (Nissan calls this Zero Gravity Seating Technology) as well as a cargo hold that is 39.3 cubic feet behind the second row of seats and 70 cubic feet with all the back seats folded.

Oh yeah, we almost forgot to mention the new for 2014 third row of seats available on the Rogue which when in place leaves about 9 cubic feet for cargo. We say, if you need a third row why not go for the Pathfinder as it's roomier and just makes more sense for really large families. Either that or Nissan would happily sell you a Nissan Quest minivan. 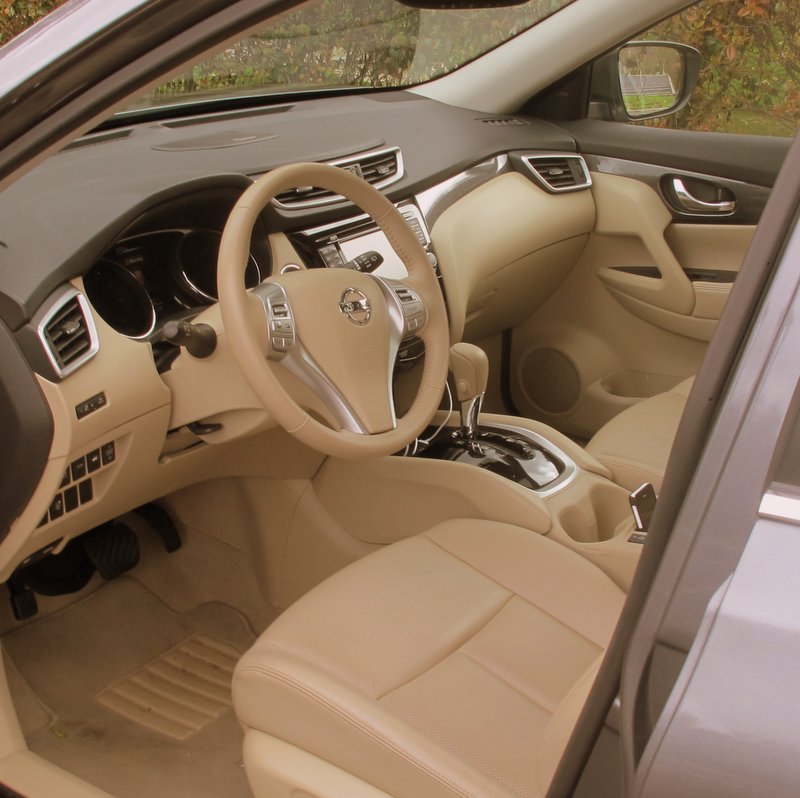 You can't really ask for much more technology be available on the 2014 Nissan Rogue as pretty much anything you can dream up in this class is optional at least. The only issue is that sometimes the technological features in the 2014 Nissan Rogue can be borderline annoying and obtrusive. Thank goodness, however, that Nissan believes in letting the customer decide and most features are relatively quick and simple to turn off. Even if it is for good. That is why we recommend you try out all of the optional technology out on the road (see safety section for a run-down of what we mean) so you don't spend extra on features you never use.

But we did love many things in the 2014 Nissan Rogue like it's "Around View Camera" which gives you a virtual Bird's Eye view all around the SUV as you are backing up. We also loved how simple and straightforward the design of both the dual zone climate control and center stack in-dash navigation screen both were. It all helped keep the dashboard from feeling overwhelming and Nissan's clever cargo hold Divide N' Hide system is a clever way to keep folks from checking out your valuables. And barring the lane departure warning system, Nissan's safety features all worked flawlessly.

Our 2014 Nissan Rogue did not come with all-wheel drive and as such had a predicted EPA fuel economy rating of 26 city/33 highway on regular unleaded gasoline. This figure is class leading and was made all the more disappointing when the best we could manage was a little over 22 miles per gallon over the course of a week. Still, the 14.5 gallon fuel tank allowed a decent cruising range and to criticize an SUV which weighs nearly 3,400 lbs. for being a bit thirsty is to expect miracles from the laws of physics. 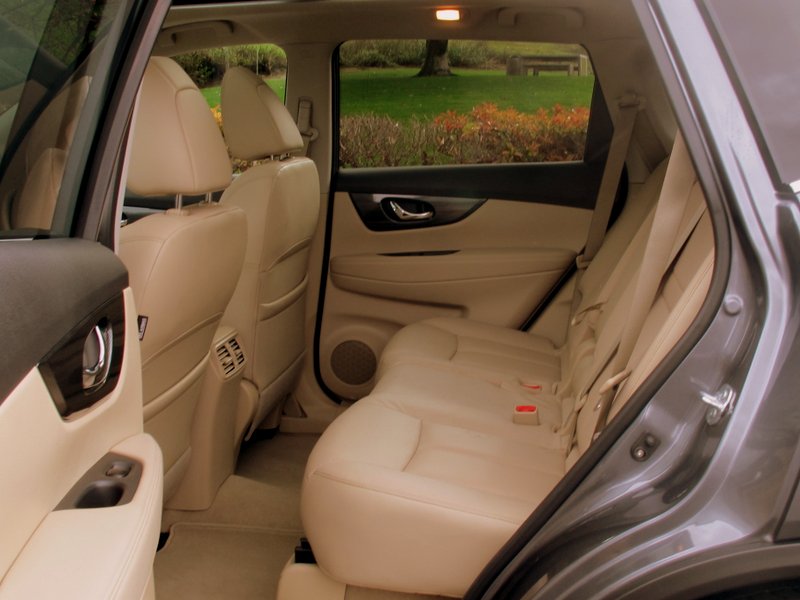 Since the 2014 Rogue is an all-new model this year it's tough to predict how well it will do long term in the reliability stakes but in J.D Power's Initial Quality Survey sent to owners after three months with their new car it seems that this generation Rogue should prove average. In most categories customers gave the Rogue a 3 out of 5 star rating which doesn't point to any major issues but it also doesn't show any particular strength either. J.D Powers gave the 2014 Rogue 4 stars out of 5 rating for predicted long term reliability which does lag behind stalwarts like the Honda CR-V and Toyota RAV4.

Not only is the 2014 Nissan Rogue a IIHS (Insurance Institute for Highway Safety) choice this year for its top honor of "Top Safety Pick Plus" but this compact family SUV offers safety features you can't find anywhere else in its class. The Rogue can be had with Nissan's ingenious "Around View Bird's Eye Safety Monitor" which gives the driver a view in four directions and from above the SUV instead of the usual one view found in most back-up cameras. Never again will backing up or parallel parking be an act of faith and guesswork.

Also, on our top of the line SL Rogue model we had a Blind Spot Warning System (a light illuminates by your side mirror if a vehicle is in your blind spot), a Moving Object Detection system that works at speeds below 5 miles per hour so you don't miss anything backing up as well as a Collision Impact Warning System which warns you if you are getting too close to the car ahead of you. The only system we didn't care for was the Lane Departure Warning System as its loud beep warning was often times startling at a quiet cruise. Do note, however, that our Rogue was a pre-production model so this problem is not indicative of production versions and besides—you can always turn on the lane departure warning function if you hate it. 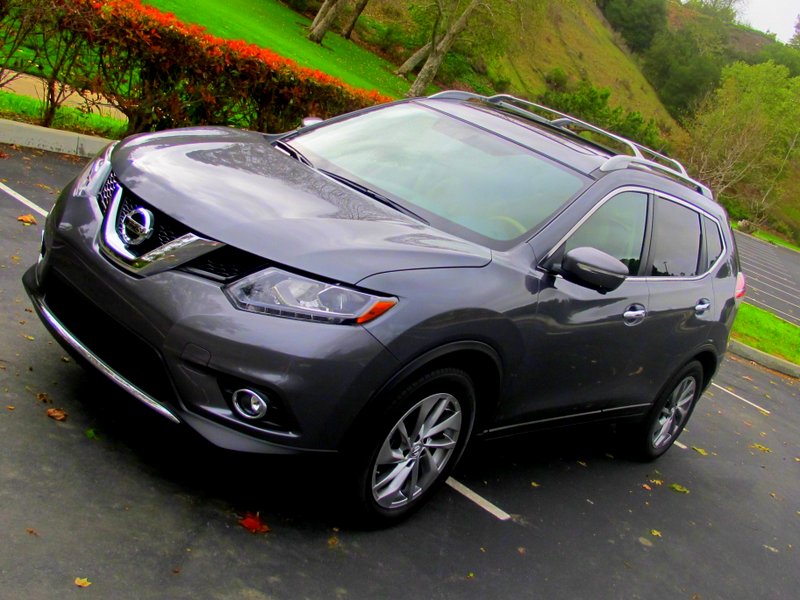 The Rogue's powertrain was the one area where little to no changes were made although clearly the body is stiffer and sound deadening measures far more advanced since cruising in this new model is a much more calm experience than ever before. Where once was a rattling buzztrap now you find a compact SUV whose doors slam with authority and keep wind, tire and road noise out of the cabin. For long drives, this makes the 2014 Rogue far more recommendable than before.

Unfortunately, Nissan decided to stick with the same 2.5 liter 170 horsepower/170 lb. feet of torque 4-cylinder engine that was in use last year and yet again mated it to a CVT (continuously variable automatic transmission) automatic that is much improved but still leaves some gap between it and the best in class. First off, we applaud Nissan trying to have a fuel efficient version but why not be like Kia, Subaru and even Ford and offer a larger compact SUV engine option for those who want performance? Or at least a little bit.

Now, the Rogue will no doubt satisfy most drivers on average suburban streets but sometimes when you need a real hit of power like on Southern California freeways, we found the Rogue's power lacking. At least, however, the CVT no longer makes so much noise. So we do agree that Nissan's improving on CVT technology but in the future we hope more work can be done to make these odd (yet oddly fuel efficient) gearboxes less of a compromise. 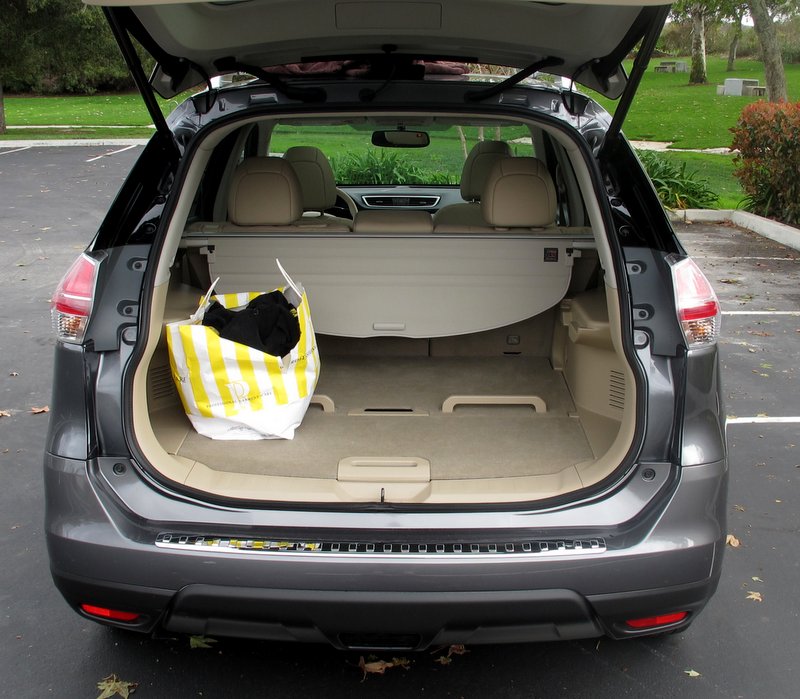 Base S model Rogue models start just under $23,000 and comes with all of the basics like air conditioning, power everything, 17 inch alloys, Bluetooth, AM/FM/CD/USB audio system with four speakers, a back-up camera and lots of other stuff you expect at this price point. Move up to the Rogue SL like our tester and you start above $28,000 for features like push button start, dual zone climate, 18-inch alloy wheels, navigation, leather interior, the Around View Monitor System and more fancy chrome than you can shake a stick at.

If you demand everything with your 2014 Nissan Rogue (just as our SL model was outfitted) then you must add $1,990 to the tally for the Premium Package thereby taking the MSRP above $31,000. What do you get with the Premium Package? A large panoramic glass sunroof, self-leveling HID (High Intensity Discharge) headlamps as well as blind spot assist, lane departure warning, collision warning and the moving object detection system. Do note that 7-passenger seating is only available on mid-level SV trims without the panoramic sunroof and you must order the $940 Family Package to get it.

Overall, the 2014 Nissan Rogue can be a good value if you are wise with how much you spend on options but if you get carried away then you really need to look twice at some of the excellent similarly priced competition. We think a Rogue in SV trim starting at $24,400 with the Premium Package that pushes the tally just above $26,000 is the smartest buy in the line-up (this package adds navigation, around View Cameras, power tailgate, blind spot warning, moving object detection and more).

But in the end you can have more fun driving your compact and still relatively affordable family SUV by looking at the VW Touareg, Subaru Forester XT, Kia Sportage Turbo, Mazda CX-5 or the Ford Escape. Or if you want to own something that will be bombproof and relatively entertaining there is always the Honda CR-V. We do not recommend you check out the Mistubishi Outlander Sport due to a frightening lack of power or the Toyota RAV4 due to a frightening lack of style. All in all, the new 2014 Nissan Rogue is an excellent new entry in a field already crowded with exemplary players. 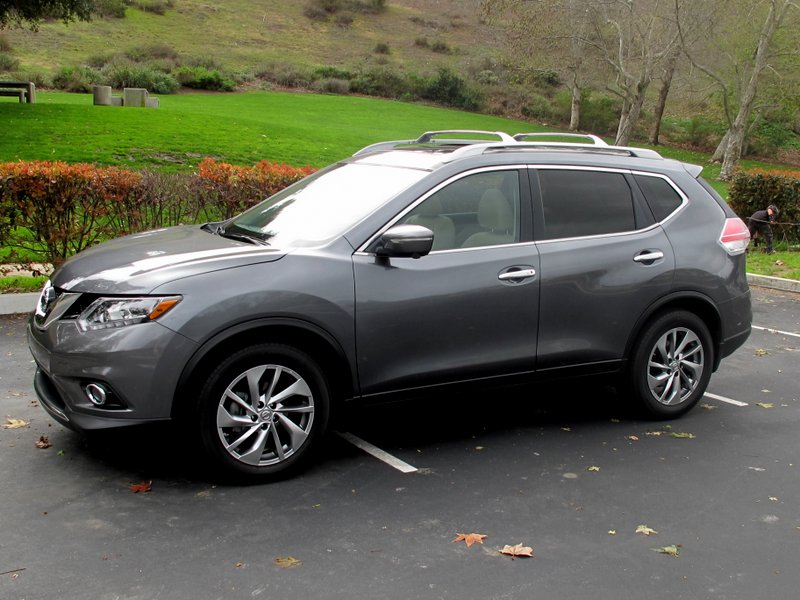